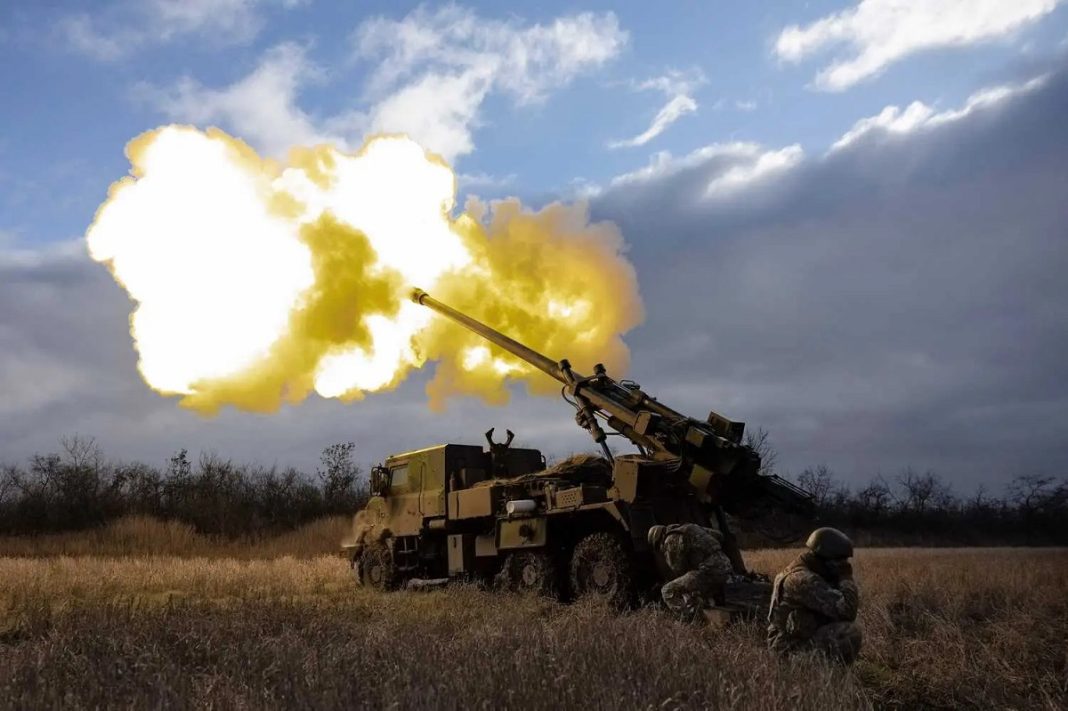 As Russia’s invasion of Ukraine enters its 11th month, US and Ukrainian officials tell CNN that Russia’s artillery fire is down dramatically from its wartime high, in some places by as much as 75%.

US and Ukrainian officials don’t yet have a clear or singular explanation. Russia may be rationing artillery rounds due to low supplies, or it could be part of a broader reassessment of tactics in the face of successful Ukrainian offenses.

Either way, the striking decline in artillery fire is further evidence of Russia’s increasingly weak position on the battlefield nearly a year into its invasion, US and Ukrainian officials told CNN.

It also comes as Ukraine is enjoying increased military support from its Western allies, with the US and Germany announcing last week that they will be providing Ukrainian forces for the first time with armored fighting vehicles, as well as another Patriot Defense missile battery that will help protect its skies.

Russian President Vladimir Putin, meanwhile, is apparently clambering to shore up domestic political support, US intelligence officials believe, for a war he initially would only describe as a limited “special military operation.”

US and NATO “an indirect side of this conflict”: Kremlin

The Kremlin has announced the US and NATO are indirectly taking part in the “conflict” in Ukraine, as Russia’s grinding invasion approaches 11 months.

“Although both Brussels and Washington emphasize that they are not going to become a party to the conflict, de facto, they have already become an indirect side of this conflict, pumping Ukraine with weapons, technologies, and intelligence information,” Kremlin spokesperson Dmitry Peskov told reporters Tuesday.

Peskov was echoing an earlier statement made by Russian Security Council secretary Nikolai Patrushev, who stated Monday that Russia is fighting with NATO in Ukraine.

“The events in Ukraine are not a confrontation between Moscow and Kyiv, this is a military confrontation of NATO, particularly of the United States and England, against Russia. Fearing direct contact, NATO instructors are driving Ukrainian guys to a certain death,” Patrushev noted in an interview with Russian state-owned newspaper Argumenti i Fakti.

Russia “is liberating its regions from occupation and must put an end to the bloody experiment of the West to destroy the fraternal Ukrainian people,” Patrushev added.

“We are not at war with Ukraine, because by definition we cannot have hatred towards ordinary Ukrainians,” he continued.

“The sooner the citizens of Ukraine realize that the West is fighting against Russia with their hands, the more lives will be saved,” Patrushev said, adding, “The whole story with Ukraine was started in Washington in order to work out the technologies for delimiting and playing off united people against each other.”

NATO has remained steadfast in supporting Ukraine’s resistance against Russia, with Western nations sending billions of dollars worth of weapons and other aid to Kyiv.

On Thursday, NATO Secretary General Jens Stoltenberg warned of the danger of underestimating Russia during President Vladimir Putin’s “war of aggression against Ukraine.”

“The Ukrainian forces have inflicted heavy losses on Russia in Ukraine. But Russians have once again shown a willingness to take great risks and endure great human losses,” Stoltenberg said at a business conference in Oslo, Norway.

Italy must sort out “technical issues” before dispatching air defense systems to Kyiv, according to the country’s foreign minister.

Antonio Tajani told Italian radio station Rai Radio 1 that the Italian government was not slowing down its aid to Ukraine, but he did not specify what the issues with the air defense systems were.

“The defense project is Italian-French, we are working intensively with the French, there are technical problems to resolve with regards to non-bureaucratic military aspects,” Tajani told Rai on Tuesday.

“There are no brakes on the air defense project in Ukraine,” the foreign minister continued, adding that the country’s defense minister Guido Crosetto was also working on the problem.

EU to sanction Belarus after continuing to support Russia

“We will keep pressure on the Kremlin for as long as it takes with a biting sanctions regime, we will extend these sanctions to those who militarily support Russia’s war, such as Belarus or Iran”, von der Leyen stated at a news conference.

“And we will be coming forward with new sanctions against Belarus answering their role in this Russian war in Ukraine,” she added.

Jens Stoltenberg told reporters at a news conference that Russian President Vladimir Putin had “failed” in his attempts to divide Western allies over the conflict.

NATO allies have supplied Ukraine with billions of dollars of military support since Moscow launched its invasion in February.

Russia’s defence minister says his country will continue developing its nuclear triad of ballistic missiles, submarines and strategic bombers because such weapons are the main guarantee of its sovereignty.

“We will continue to develop the nuclear triad and maintain its combat readiness since the nuclear shield has been and remains the main guarantor of the sovereignty and territorial integrity of our state,” Sergei Shoigu stated.

“We will also increase the combat capabilities of the aerospace forces – both in terms of the work of fighters and bombers in areas where modern air defence systems are in operation, and in terms of improving unmanned aerial vehicles,” he added.

Ukrainian President Volodymyr Zelensky has stated that Bakhmut and Soledar were holding on despite widespread destruction.

“Thanks to the resilience of our soldiers in Soledar, we have won for Ukraine additional time and additional strength,” he said.

He did not spell out what he meant by gaining time or strength.

Zelensky added that new and fiercer attacks in Soledar had left no walls standing and that land in the eastern front was covered with Russian corpses.

Iran sending drones could contribute to war crimes: US

“Their weapons are being used to kill civilians in Ukraine and to try to plunge cities into cold and darkness which, from our point of view, puts Iran in a place where it could potentially be contributing to widespread war crimes,” Sullivan told reporters.

Two British nationals have gone missing in Ukraine, the UK’s Foreign, Commonwealth and Development Office (FCDO) announced in a statement to CNN Monday.

“We are supporting the families of two British men who have gone missing in Ukraine,” an FCDO spokesperson said.

The spokesperson didn’t provide further details about the two British nationals or their last known location.

The Russian and Ukrainian human rights commissioners will meet in Turkey later this week, news agencies from both countries reported, to likely discuss more prisoner exchanges.

Interfax quoted the Russian commissioner, Tatiana Moskalkova, as saying the meeting with her Ukrainian counterpart Dmytro Lubinets would occur during an international forum in Turkey between Thursday and Saturday.

Ukraine’s Ukrinform news agency quoted Lubinets as saying the main issue was “the return of our heroes and heroines”, a reference to prisoner exchanges.

“Separately, we want to raise the issue of the return of civilian hostages, whom the Russian Federation has detained en masse in the temporarily occupied territories of Ukraine and whom it does not allow to go home,” Lubinets added.

A government spokesperson said that Germany has no plans to send Leopard 2 tanks to Ukraine.

Last week the German government announced it was sending Marder fighting vehicles to the war-torn country, answering Kyiv’s calls for more heavy weapons to battle back against Russian forces.

Earlier on Monday, the economy minister also stated Berlin could not rule out the delivery of the Leopard tanks, which are heavier fighting vehicles than the Marders.

Around ’76 percent’ of foreign companies remain in Russia: Official

Around 76 percent of foreign companies continue to operate in Russia, the head of Russia’s lower legislative chamber said.

Despite the exodus of dozens of foreign firms over the war in Ukraine, “75.9 percent of foreign companies stayed in Russia”, State Duma speaker Vyacheslav Volodin said on Telegram.

“This decision speaks volumes: They believe in good prospects for the development of our country’s economy, they are satisfied with the business climate. Those who left suffer billions of dollars in costs”, noted Volodin.

The senior lawmaker added that Russian companies replaced niches left open by foreign businesses and urged them to be “nationally oriented” so their earnings are spent on the development of Russia, underlining that it was a priority of the State Duma to provide legal support for such purposes.

Kyiv expects the EU to include Russian state nuclear energy company Rosatom in its next round of sanctions, Prime Minister Denys Shmyhal says.

Shmyhal said after talks in Kyiv with Frans Timmermans, a vice president of the European Commission, that Rosatom should be punished over the invasion of Ukraine.

“We expect that the 10th package [of EU sanctions] will contain restrictions against Russia’s nuclear industry, in particular Rosatom,” Shmyhal said on Telegram. “The aggressor must be punished for attacks on Ukraine’s energy industry and crimes against ecology.”

Russia has occupied the Zaporizhzhia Nuclear Power Plant in southeastern Ukraine since March, and Putin issued a decree in October transferring control of the plant from the Ukrainian nuclear energy company Energoatom to a subsidiary of Rosatom.

Sky News reported that discussions have been taking place “for a few weeks” about delivering the British army’s main battle tank, the Challenger 2, to Ukraine.