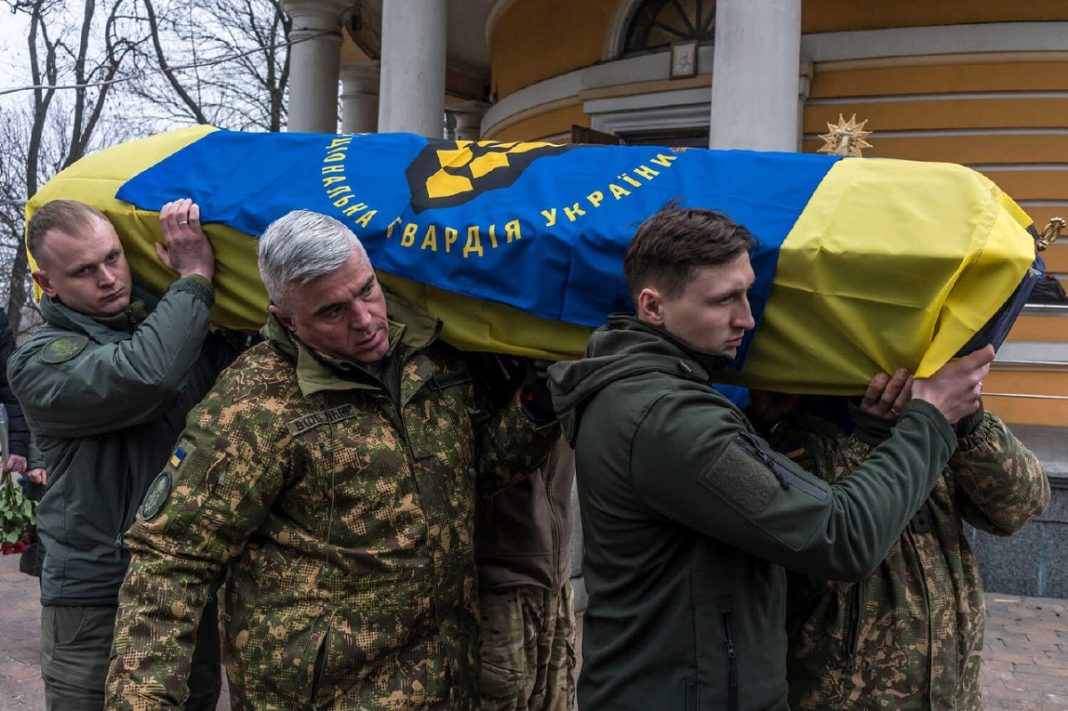 The Kremlin announced on Monday new deliveries of Western weapons to Kyiv would “deepen the suffering of the Ukrainian people” and would not change the course of the conflict.

“This supply will not be able to change anything,” Kremlin spokesman Dmitry Peskov said.

According to Maria Zakharova, spokeswoman for the Russian foreign ministry, additional Western weapons to Kyiv will delay the end of the conflict.

Kremlin spokesman Dmitry Peskov has denied that a senior Russian official was discussing a potential peace deal with European officials.

When asked about Danilov’s assertion, Peskov noted it was “another fake”.

Pope Francis on Monday said wars like the one in Ukraine where civilian areas are subjected to what he called indiscriminate destruction are “a crime against God and humanity”.

Francis made his remarks in his yearly speech to diplomats accredited to the Vatican, an overview of the world situation which has come to be known informally as his “state of the world” address.

Francis spoke of “the war in Ukraine, with its wake of death and destruction, with its attacks on civil infrastructures that cause lives to be lost not only from gunfire and acts of violence, but also from hunger and freezing cold”.

He then immediately quoted from a Vatican constitution, stating “every act of war directed to the indiscriminate destruction of whole cities or vast areas with their inhabitants is a crime against God and humanity which merits firm and unequivocal condemnation”.

Referring to the Cuban missile crisis in 1962, he noted: “Sadly, today too, the nuclear threat is raised, and the world once more feels fear and anguish.”

He repeated his appeal for a total ban on nuclear weapons, adding even their possession for reasons of deterrence is “immoral”.

100 prisoners of war exchanged between Russia and Ukraine

Russia and Ukraine carried out a prisoner exchange Sunday with a total of 100 soldiers returning home, according to authorities from both countries.

As a result of the negotiation process, 50 Russian soldiers captured by Ukraine were returned to Russia, Russian Defense Ministry announced in a statement.

“We returned the people who were captured at the Chernobyl nuclear power plant, as well as the defenders of Mariupol, the guys from the Donetsk direction, from near Bakhmut, as well as from Kyiv, Chernihiv, Kherson and other regions,” Yermak stated, adding, “This is not the last exchange. Our task is to return all our people and we will fulfill it.”

This is the 36th exchange between Russia and Ukraine since the beginning of the full-scale Russian invasion, with 1,646 people — military and civilians — returned home to Ukraine, according to the Coordination Headquarters on the Treatment of Prisoners of War in Kyiv.

Leopard tanks to Ukraine can’t be ruled out: Germany

“Of course it can’t be ruled out,” Robert Habeck said.

His comments come days after Berlin announced it wants to deliver around 40 Marder infantry fighting vehicles to Ukraine before the end of March, a decision Habeck stated was good and long overdue.

UK Justice Minister Dominic Raab will host a meeting alongside his Dutch counterpart in London in March, which will see justice ministers from across the globe gather to support the International Criminal Court’s (ICC) investigation into alleged Russian war crimes in Ukraine.

In a statement, the UK government said the meeting “aims to increase the global financial and practical support being offered to the ICC and coordinate efforts to ensure it has all it needs to carry out investigations and prosecute those responsible.”

Prosecutor of the ICC, Karim Khan will address the London meeting, providing an insight into the court’s work and “the role of the international community in supporting its investigations,” the statement added.

Last week, British politicians from across the political divide expressed their support for the creation of a special tribunal to investigate Russia’s “crime of aggression” in Ukraine.

They include opposition leader Keir Starmer and former Conservative Party leader and MP Iain Duncan Smith, according to British newspaper The Observer, which said a copy of the statement was shared with them.

“Almost a year on from the illegal invasion, the international community must give its strongest backing to the ICC so war criminals can be held to account for the atrocities we’re witnessing,” Raab stated in the UK government statement.

At least 453 children have been killed and at least 877 have been injured since the start of the war in Ukraine, the country’s Defense Minister Oleksii Reznikov stated.

“However, real numbers are much higher. Russia has been committing war crimes and has no plans to stop,” he added.

It comes after UNICEF warned last month that Russian strikes on critical infrastructure in Ukraine have put the physical and mental health of “almost every child” in the country “at desperate risk.”

“Millions of children are facing a bleak winter huddled in the cold and the dark, with little idea of how or when respite may arrive,” said UNICEF Executive Director Catherine Russell.

“Beyond the immediate threats the freezing conditions bring, children are also deprived of the ability to learn or stay connected with friends and family, putting both their physical and their mental health at desperate risk,” Russell added

“This information is as true as the data that they have destroyed all of our HIMARS,” Sergiy Cherevaty, spokesman for the Eastern group of the Ukrainian armed forces, told the Suspilne media outlet, referring to high mobility artillery rocket systems (HIMARS) supplied by the United States.

Later, speaking to the BBC, Cherevaty called the claim “propaganda”.

Reuters reporters who visited the dormitories where the soldiers had allegedly been killed said there were no signs of a mass casualty event.

Moscow has announced its army conducted a deadly “retaliatory strike” in the eastern Ukrainian city of Kramatorsk.

Russia’s defence ministry did not say when the strike occurred, but claimed “more than 600 Ukrainian servicemen were killed” when two buildings used as barracks were targeted in the city in the eastern region of Donetsk.

The casualty number could not immediately be independently verified, but would represent one of the deadliest single attacks since Russia’s invasion of Ukraine began on February 24, 2022.

The ministry added the attack was in response to a Ukrainian strike at the beginning of the year on the Russian-occupied town of Makiivka, in which Russia stated 89 of its troops were killed.

Ukraine did not immediately respond to the claim.

Earlier on Sunday, Pavlo Kyrylenko, the head of the Donetsk regional administration, noted Russia had launched seven rocket attacks on Kramatorsk, saying that “an educational institution, an industrial facility and a garage cooperative” had been damaged. He added there were no casualties