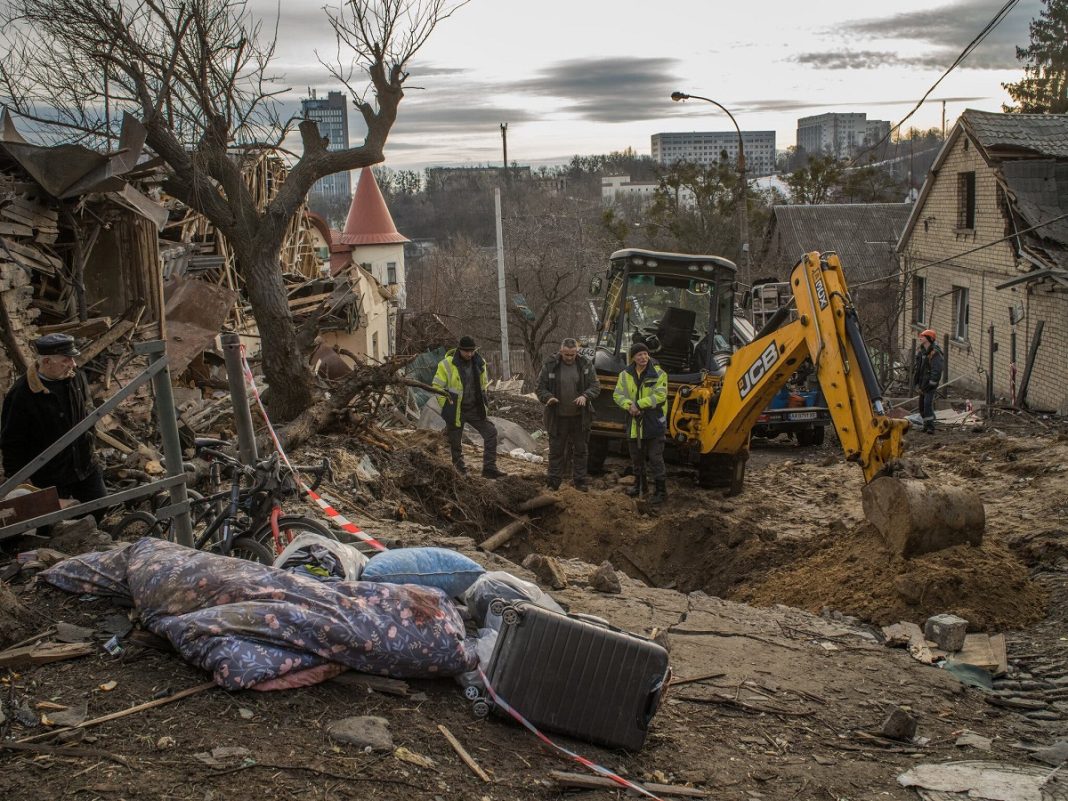 “It is difficult for us to judge whether Podolyak’s opinion reflects the view of the president of Ukraine,” Interfax quoted Peskov as saying.

Zelensky has yet to comment on the proposed truce during Orthodox Christmas celebrations. Earlier, Ukrainian presidential adviser Mykhailo Podolyak rejected the proposal as “hypocrisy,” noting such an arrangement would only be possible if Russia left all territories it occupied.

US to send Ukraine dozens of Bradleys in $2.85bn aid package

The US will send Ukraine nearly $3bn in military aid, in a massive new package that will for the first time include several dozen Bradley fighting vehicles, US officials said.

The aid – totalling about $2.85bn – is the largest in a series of packages of military equipment that the Pentagon has pulled from its stockpiles to send to Ukraine.

The Bradley fighting vehicles is a medium-armored combat vehicles that can serve as a fortified troop carrier on the battlefield. It has tracks rather than wheels, but is lighter and more agile than a tank. It can carry about 10 personnel, and is seen as a critical way to move troops safely into battle.

Also included in the aid package will be HUMVEES, Mine Resistant Ambush Protected vehicles, or MRAPs, and a large amount of missiles and other ammunition.

UN chief would welcome Ukraine truce, does not replace a ‘just peace’

A UN spokesman stated that Secretary-General Antonio Guterres would welcome any truce in Ukraine during Orthodox Christmas, “knowing that this will not replace a just peace in line with the UN Charter and international law”.

US President Joe Biden said that his Russian counterpart Vladimir Putin’s order for a two-day Orthodox Christmas ceasefire in Ukraine was simply an effort to find breathing room for his war effort.

Asked about the proposed truce, Biden told reporters at the White House: “I’m reluctant to respond to anything that Putin says. I found it interesting that he was willing to bomb hospitals and nurseries and churches … on the 25th and New Year’s. I mean, I think he’s trying to find some oxygen.”

Mykhailo Podolyak, a political adviser to Ukraine’s president, has slammed Russian President Vladimir Putin’s order for a Christmas ceasefire and accused Moscow of “hypocrisy” for calling on Ukraine to also declare a truce.

“Ukraine destroys only members of the occupation army on its territory… Second. RF must leave the occupied territories – only then will it have a ‘temporary truce’. Keep hypocrisy to yourself,” he added.

Putin instructs forces to observe a ceasefire over Orthodox Christmas

President Vladimir Putin has instructed Russia’s defence minister to introduce a ceasefire in Ukraine from noon local time (10:00 GMT) on Friday to midnight (22:00 GMT) on Saturday, in line with the Orthodox Christian Christmas.

There was no immediate response from Ukraine, which earlier on Thursday rejected a call from the head of the Russian Orthodox Church for a truce as a “cynical trap”.

President Vladimir Putin has told his Turkish counterpart that he is open to talks with Ukraine if Kyiv accepts the “new territorial realities” on the ground.

According to the Kremlin, Putin confirmed to Recep Tayyip Erdogan during a telephone conversation between the pair that Russia was open “to serious dialogue”.

However, he said this was contingent on Ukraine “fulfilling the well-known and repeatedly voiced requirements of taking into account the new territorial realities”.

Russia moved to unilaterally annex four partly occupied Ukrainian regions – Luhansk and Donetsk in the east, and Kherson and Zaporizhia in the south – in September and has rejected a peace plan put forward by Kyiv which calls for Moscow to respect Ukraine’s territorial integrity and withdraw all of its troops from the country.

NATO Secretary-General Jens Stoltenberg has warned it would be “dangerous to underestimate” Russia over the nearly yearlong war in Ukraine.

“They have shown a great willingness to tolerate losses and suffering,” Stoltenberg told a business conference in Norway.

“We have no indication that President [Vladimir] Putin has changed his plans and goals in Ukraine. So it’s dangerous to underestimate Russia,” he added.

Russia’s war in Ukraine, the largest in Europe since World War II, has killed tens of thousands of people, driven millions from their homes and reduced vast swaths of the country to rubble.

Ukraine’s economy shrunk by almost a third last year, after Russian forces invaded in February, according to a statement from the country’s economy ministry.

The ministry recorded a 30.4% decrease in gross domestic product (GDP), the worst result since the country gained independence from the Soviet Union in 1991, it said.

However the figure is “better than most experts expected at the beginning of the full-scale invasion, when estimates ranged from 40-50% of decline in GDP and deeper,” adds the statement.

Yulia Svyrydenko, minister of Economic Development and Trade, noted that “the successes of the Ukrainian defense forces on the battlefield, the coordinated work of the government and business, the indomitable spirit of the population, the speed of restoration of destroyed/damaged critical infrastructure by domestic services, as well as systematic financial support from international partners allowed us to hold the economic front and continue to move towards victory.”

Russia’s targeting of energy infrastructure has been an important factor in the hit to the Ukrainian economy, stated the ministry, as a sustained campaign of strikes have “put pressure on business sentiment and activity.”

Erdogan tells Putin peace efforts should be underpinned by a ceasefire

Turkish President Recep Tayyip Erdogan has told President Vladimir Putin in a phone call that peace efforts in the Russia-Ukraine war should be supported by a unilateral ceasefire and a “vision for a fair solution”, according to his office.

The Turkish presidency said in a statement that the two leaders also discussed energy and the Black Sea grains corridor during their conversation.

Erdogan was due to hold separate talks with Ukrainian President Volodymyr Zelenskyy later on Thursday.

The Turkish leader enjoys good relations with both Moscow and Kyiv and has attempted to position himself as a mediator between the two sides amid the war.

Germany will always adjust its arms deliveries to Ukraine according to the needs on the battlefield, the country’s vice chancellor has said after France became the first Western nation to commit to supplying Kyiv with light-armoured combat vehicles.

“We will not stop to deliver weapons to Ukraine … We will always adjust our deliveries to the need of the battlefield,” Robert Habeck stated at a Norwegian business conference.

Over 60% of the city of Bakhmut destroyed: Ukrainian official

Over 60% of Bakhmut is now destroyed as Russian forces attempt an advance on the city in Ukraine’s eastern Donetsk region, a Ukrainian official said Wednesday.

“Whatever attempts to enter the city the enemy makes, it fails to advance. Whatever advances they had, they have been pushed back to their previous positions, outside the city limits,” Pavlo Kyrylenko told Ukrainian television.

“In fact, they are now in the flat devastated area, which also contributes to their huge personnel losses,” he added.

Bakhmut is regularly referred to as the most contested and kinetic part of the 1,300km (800 mile) front line in Ukraine. The Russian advance has left the city in ruins, a smoking shell of its former self. This fate has burnished Bakhmut’s power as a symbol of Ukrainian resistance – in the face of devastating Russian attacks, it is still holding on.

In his historic address to Congress last month, Ukraine President Volodymyr Zelensky dedicated six minutes of his 25-minute speech to the situation around Bakhmut.

“Last year, 70,000 people lived here in Bakhmut in this city,” he said, adding, “Now only a few civilians stay. Every inch of that land is soaked in blood, roaring guns sound every hour… the fight for Bakhmut will change the tragic story of our war for independence and of freedom.”

French President Emmanuel Macron told President Volodymyr Zelensky that his government would send light AMX-10 RC armoured combat vehicles to help in the war against Russia, a French official said after a phone call between the two leaders.

“This is the first time that Western-made armoured vehicles are being delivered in support of the Ukrainian army,” the official added.

Speaking to reporters, the official did not give any details about the volume or timing of the planned shipments but stated talks would continue regarding the potential delivery of other vehicle types.

The French-made AMX-10 is an armed reconnaissance vehicle with high mobility, which carries four people, according to the French armed forces ministry website.

Ukraine has downed over 540 Iranian-made drones since September: Military officials

The Ukrainian Military said Wednesday it has downed more than 540 Shahed drones since September last year and around 500 cruise missiles.

“During the first two hours of the night this year, Ukrainian air defense shot down 100% of drones, namely 84 units,” according to Ukraine’s Military Media Center.

On Monday, Ukrainian President Volodymyr Zelensky claimed that Russia is planning a prolonged campaign of attacks with Shahed drones to exhaust Ukraine.

Italy cannot be a ‘honest broker’ in the conflict: Russia

Russia says Italy is not an “honest broker” or possible mediator in peace talks with Ukraine due to its position against Moscow.

“Obviously, given the partisan position taken by Italy, we cannot regard it as either an ‘honest broker’ or a possible guarantor of the peace process,” foreign ministry spokeswoman Maria Zakharova stated.

She added that it is “strange” for Moscow to hear proposals for mediation from countries that took “an unequivocal and very aggressive anti-Russian position” since the very beginning of its “special military operation” in Ukraine last February.

Zakharova added that some countries pursue “selfish goals” with the intent of being involved in the negotiation process to receive “foreign policy dividends”.

“It would be better if the European pseudo-peacekeepers stopped the military support of Kyiv and focused their efforts on more firm and demanding work with the President of Ukraine Volodymyr Zelensky”, she said, referring to Zelensky previously saying he would not negotiate with President Vladimir Putin.

Lambrecht published a video on Instagram talking about the challenges of 2022 including Russia’s war in Ukraine, while fireworks and explosions went off in the background.

She has been widely accused of insensitivity, with opposition lawmakers even calling on her to resign.

“The chancellor works well and in a spirit of trust with all his cabinet colleagues. And of course, that also applies to the minister mentioned,” he added.