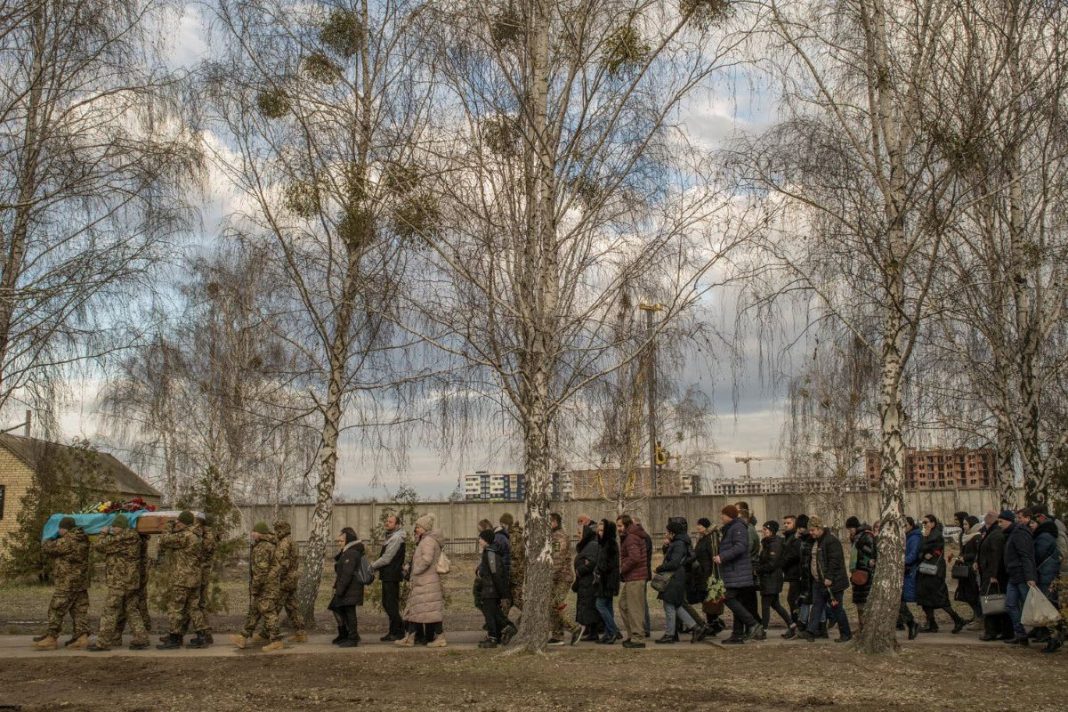 Western allies need to “ramp up” arms production in the coming months to ensure Ukraine is kept fully supplied in its war against Russia, the secretary-general of NATO has said.

Jens Stoltenberg stated the conflict is consuming an “enormous amount” of munitions, amid signs that President Vladimir Putin is digging in for the “long haul”.

He noted NATO allies need to maintain their own stockpiles of weapons as well as continuing to supply the government in Kyiv with the armaments it needs.

Stoltenberg told BBC Radio 4’s The World This Weekend: “For the artillery, we need an enormous amount of ammunition, we need spare parts, we need maintenance.”

“This is a huge undertaking. We need to ramp up production, and that is exactly what the NATO allies are doing,” the chief continued.

“It is a core responsibility for NATO to ensure that we have the stocks, the supplies, the weapons in place to ensure our own deterrence and defence, but also to be able to continue to provide support to Ukraine for the long haul,” he stated.

Ukraine says it has inflicted heavy losses on Russians in Bakhmut

The Ukrainian military claims to have inflicted heavy losses on Russia troops in Bakhmut, the small city in eastern Ukraine that has been the scene of fierce battles for months.

About 170 Russian soldiers were killed in fighting for control of the bombed-out city on Saturday, the spokesman for the Eastern Group of the Armed Forces, Serhiy Cherevaty, said on Sunday.

Cherevaty described it as an “assembly line of death” for the Russian occupiers and added at least 200 more Russians were wounded.

Moscow has not commented, and battlefield accounts in the 10-month-old war are often impossible to immediately confirm.

Russia’s defence ministry announced a raid hit “the facilities of the military-industrial complex of Ukraine” which is involved in the production of drones, and that the “plans of the Kyiv regime to carry out terrorist attacks against Russia in the near future have been thwarted”.

Russian troops are depleting their stocks of artillery ammunition at a faster rate than expected, and they will not be able to keep up the current pace of attack, according to the Institute for the Study of War.

President Vladimir Putin’s forces are experiencing significant issues with artillery shells that will worsen by March this year, the think tank said in a report.

Russian forces have removed all artillery ammunition from Belarusian military warehouses to use in the attack on Ukraine, it states, but will not be able to carry out intensified attacks for much longer without back up.

The head of the Office for the Protection of the Constitution, Thomas Haldenwang, also counts China and Iran among the states whose intelligence services are active in Germany.

“Russia’s intelligence interest here in Germany is not only unbroken, but is also increasing as the effects of the war continue,” Haldenwang stated in an interview with dpa news agency.

“The current case also shows how real the danger of Russian espionage is,” Haldenwang added, referring to a suspected double agent at the BND foreign intelligence agency who was arrested shortly before Christmas.

Paris will stand by Ukraine until its victory, French President Emmanuel Macron has said in a televised New Year’s speech.

“During the coming year, we will be unfailingly at your side,” Macron stated.

“We will help you until victory and we will be together to build a just and lasting peace. Count on France and count on Europe,” he added.

Illegal immigration into the EU is at the highest level seen since the continent’s 2015-2016 migrant crisis, having ballooned as member states are also struggling to cope with huge influxes of refugees displaced by the Russia-Ukraine conflict.

There were 308,000 “irregular entries” detected across the external borders of European Union nations in this year’s first 11 months, up 68% from the same period in 2021, according to a report earlier this month by Frontex, the bloc’s border agency. With one month still to go, inflows were already higher than any full-year total since 2016.

As noted by Breitbart News, which reported on the migration figures earlier on Saturday, the surge in illegal immigration got little public attention this year because Europeans were focused on the Ukraine crisis. The Frontex statistics don’t include the millions of Ukrainian refugees who flooded into EU nations amid the fighting in their country.

While legitimate refugees aren’t counted as “irregular entries,” many of the foreigners flooding into Western Europe are economic migrants. For instance, the largest share of migrants crossing the English Channel to seek asylum in the UK are from Albania, which isn’t at war.

The Western Balkan and Central Mediterranean routes have the most migrant traffic this year, according to Frontex. There were 27,000 irregular border crossings into EU states in November alone. The agency said it’s providing more than 2,100 officers to help countries cope with “heavy migratory pressure and other challenges at their borders.”

Blasts heard in Kyiv, around Ukraine in early hours of New Year’s Day

Numerous blasts were heard in Kyiv and in other places around Ukraine and air raid sirens wailed across the country in the first couple hours after midnight on New Year’s Day.

As the sirens wailed, some people in Kyiv shouted from their balconies, “Glory to Ukraine! Glory to heroes!”

Fragments from a missile destroyed by Ukrainian air defence systems damaged a car in the capital’s centre, but preliminarily there were no wounded or casualties, Kyiv Mayor Vitali Klitschko stated.

The attacks came minutes after Ukraine President Volodymyr Zelensky’s New Year message of wishes of victory for his country in the war that is in its 11th month, with no end in sight.

Zelensky directly addresses the Russian people in last nightly address of 2022: Putin “hides behind you”

Ukrainian President Volodymyr Zelensky switched from speaking Ukrainian to Russian in his nightly address Saturday, issuing a message to Russia and its citizens.

Zelensky said that Russia, which carried out another wave of missile attacks Saturday, is “following the devil,” and the country is waging a war to ensure that Russian President Vladimir Putin remains in power “until the end of his life.”

“All this war that you are waging, you — Russia — it is not the war with NATO, as your propagandists lie,” Zelensky continued, adding, “It is not for something historical. It’s for one person to remain in power until the end of his life.”

“And what will be with all of you, citizens of Russia, does not concern him,” he added.

Zelensky said that Putin “is hiding behind the troops, behind missiles, behind the walls of his residences and palaces” and his citizens.

“He hides behind you and burns your country and your future. No one will ever forgive you for terror,” Zelensky noted.

Zelensky added that most Russian missiles fired at Ukraine have been intercepted by air defense forces.

“If it were not for air defense, the number of casualties would have been different. Much bigger,” he said, stating, “And this is yet another proof for the world that support for Ukraine must be increased.”

Both Ukraine and Russia reported an exchange of prisoners of war on Saturday.

Andriy Yermak, the head of the Office of the President of Ukraine, said 140 prisoners of war had been released — including those from Mariupol and Snake Island.

“On the New Year Eve we not only repel enemy missile attacks, but also return our people home. This is another big exchange that we managed to carry out — 140 people are returning home. Among them are the wounded, as well as the defenders of Mariupol, Zmiinyi (Snake) Island, volunteers of territorial defense from Slavutych, fathers and sons who were in captivity together, as well as ours from Bakhmut direction,” Yermak stated in a post on Telegram.

This is the 35th such exchange of the war, according to the Ukrainian Coordination Headquarters for the Treatment of Prisoners of War.

The agency said 1,596 people — including both military personnel and civilians — have been released from Russian captivity through negotiations. That includes 187 women freed since the beginning of the full-scale invasion, according to the officials.

In a statement, the Russian Defense Ministry announced 82 servicemen had been returned.

“The liberated personnel will be delivered to Moscow by military transport airplanes for further treatment and rehabilitation at healthcare facilities of Russian Defence Ministry,” the statement added.