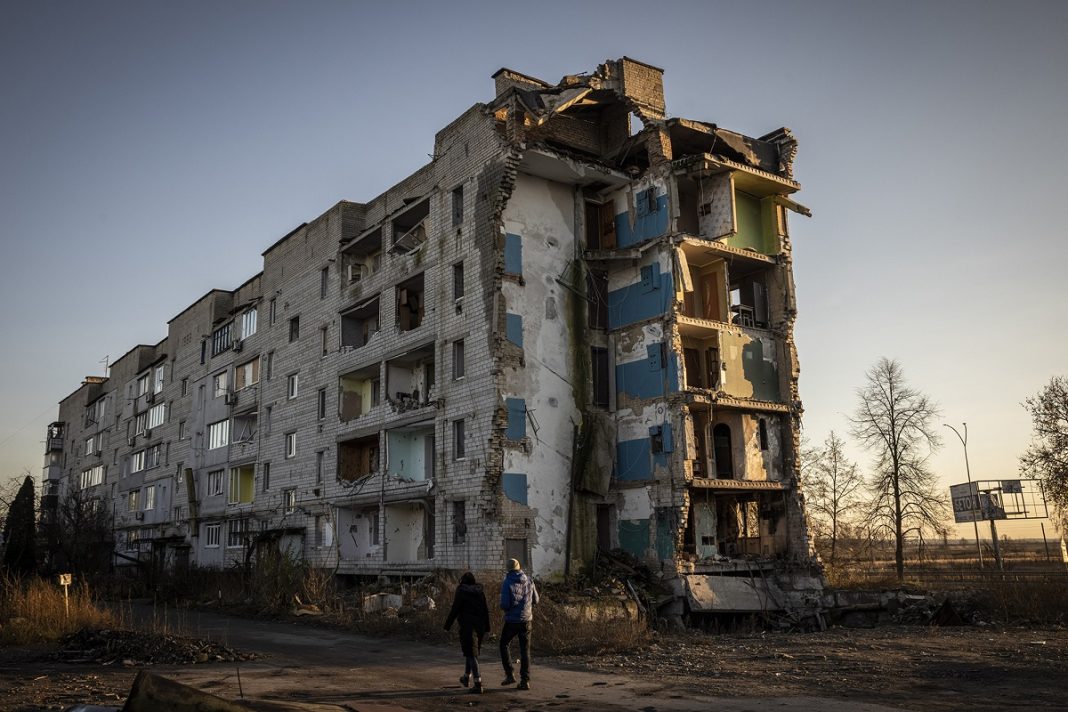 NATO foreign ministers said Tuesday in a joint statement they remain steadfast in the “commitment to Ukraine’s independence, sovereignty, and territorial integrity” and pledged allies will assist Ukraine as it repairs its energy infrastructure amid Russian attacks.

“We condemn Russia’s cruelty against Ukraine’s civilian populations and violations and abuses of human rights, such as forcible deportations, torture, and barbaric treatment of women, children, and persons in vulnerable situations,” it added.

“We also remain resolute in supporting Ukraine’s long-term efforts on its path of post-war reconstruction and reforms, so that Ukraine can secure its free and democratic future, modernize its defense sector, strengthen long-term interoperability and deter future aggression,” according to the statement.

Ukraine has been experiencing blackouts as Russia continues to bombard energy infrastructure.

“We will continue to strengthen our partnership with Ukraine as it advances its Euro-Atlantic aspirations,” the ministers read.

The G7 ministers of justice condemned Russian President Vladimir Putin’s use of “winter as a weapon,” the German justice minister said at a meeting with his counterparts in Berlin.

Minister Marco Buschmann told a news conference that Ukrainian civilians had been living in freezing temperatures as a result of Russia’s strikes on civilian infrastructure, adding the ministers had agreed this was “a terrible war crime that is aimed at ensuring that many people fall victim to winter.”

The group vowed to coordinate criminal investigations into war crimes, which they agreed was “of the highest priority,” Buschmann stated, adding Ukrainian authorities had so far documented nearly 50,000 instances of war crimes and listed around 600 suspected war criminals.

It is a shared goal of the G7 countries “to achieve maximum accountability and to deliver justice for victims and survivors,” according to a statement published after the meeting.

“There can be no impunity for war crimes and other atrocities,” he continued.

The “entire Russian leadership” should be investigated in the International Criminal Court for “crimes against humanity” Buschmann told the press conference.

Ukraine’s PM says winter season will be challenging, but 70% of power needs have been met

Ukrainian Prime Minister Denys Shmyhal said that the second winter season of the war “will be very challenging.”

He told a government meeting that Russia “will further shell the energy infrastructure; their goal is to freeze Ukraine and commit another genocide of the Ukrainian people.”

Shmyhal stated that “all regions of Ukraine, except Kherson region, are supplied with power. Currently, electricity production in the country covers 70% of consumption needs.”

He added the onus was now on regional power companies not to exceed the limits provided by state electricity provider NPC Ukrenergo and to minimize uneven disconnection of consumers.

There is sufficient energy, he said, to evenly distribute the load of forced outages so that people can turn on lights for at least five to six hours a day, Shmyhal said.

“Regarding air defense, over the past month, there has been significant progress, first of all, thanks to the supply of modern Western systems,” he continued, adding obtaining additional power equipment was also a priority, he said.

“Lithuania alone has given us 114 transformers. Other countries allocate funds and equipment to help Ukraine survive the winter. Not only Europe, but also the USA, Canada and Japan provide us with substantial support,” he said.

Shmyhal stated Ukraine’s energy resources are adequate for the winter months: “We are entering the winter with 14 billion cubic meters of gas in our storage facilities and 1.3 million tonnes of coal in storages. This resource will be quite enough to get us through the winter stably.”

He also added that the Economy Ministry foresaw no shortages of fuel and diesel, which would be required for the hundreds of generators being imported.

“We will continue to work to provide that very efficient system,“ Scholz said during a joint news conference with world financial and economic organizations.

Ukrainian President Volodymyr Zelensky told Scholz in a phone call on Tuesday about Russian airstrikes on civilian infrastructure, water and electricity supplies, according to a government news release. The chancellor condemned the ongoing shelling and assured Ukraine of further short-term assistance, government spokesperson Steffen Hebestreit stated in a news release.

“The Ukrainian president has expressed his gratitude for Germany’s very comprehensive support in monetary terms, but also in terms of weapons deliveries, because the artillery and air defense systems that we provide have a very significant impact on Ukraine’s ability to guarantee its own integrity and sovereignty,“ Scholz told journalists.

To date, the German government has provided short-term financial assistance to repair energy infrastructure in the amount of approximately 56 million euros (about $58 million), Hebestreit said in the news release. Germany is also providing over 350 generators as Ukraine suffers power outages due to the Russian shelling.

Scholz added that the German offer of its Patriot air defense system to Poland was not off the table, after stray missiles hit the country on Nov. 15.

The US is considering sending the Patriot missile defense system to Ukraine to support their air defense capabilities against incoming Russian attacks, a senior US defense official told reporters Tuesday.

Air defense of Ukraine is the US’s “top priority,” the official continued.

However, later on Tuesday, Pentagon press secretary Brig. Gen. Pat Ryder told reporters during a briefing that the US has “no plans to provide Patriot batteries to Ukraine” right now.

“We discuss a wide variety of capabilities and support with Ukraine, we regularly consult with Ukraine, we regularly consult with our allies and our partners on what their defense needs are,” Ryder said, adding, “Right now, we have no plans to provide Patriot batteries to Ukraine, but again we’ll continue to have those discussions, and when and if there’s something to announce on that front, we will.”

Part of the challenge with sending Patriot batteries or other advanced weaponry to Ukraine is those systems require a “pretty significant maintenance and sustainment tail as well as a training tail on those things,” Ryder said.

“None of these systems are plug and play, you can’t just show up on the battlefield and start using them, so those are the kinds of things that are taken into account when it comes to more advanced systems,” Ryder noted.

Ukraine’s air defense remains a “priority” to the US, Ryder added.

“We’ll continue to look at working with allies and partners in terms of what we can get to Ukraine as quickly as possible so they can start employing those capabilities immediately,” Ryder continued.

The United States will provide $53 million to support Ukraine’s electrical system as it faces a barrage of attacks from Russia.

The funding will go toward “the acquisition of critical electricity grid equipment,” which “will be rapidly delivered to Ukraine on an emergency basis to help Ukrainians persevere through the winter,” according to a media note from the US State Department.

“This supply package will include distribution transformers, circuit breakers, surge arresters, disconnectors, vehicles and other key equipment,” the note said.

The funding adds to the United States’ existing $55 million in emergency energy sector support. It was announced by US Secretary of State Antony Blinken at a meeting of the G7+ Tuesday, which took place on the margins of the NATO Foreign Ministers meeting in Bucharest, according to the media note.

US and European officials have strongly condemned Russia’s strikes on Ukrainian civilian populations and infrastructure, accusing Moscow of deliberately targeting Ukraine’s energy grid in an effort to leave people without electricity and heat – an act that they say would amount to a war crime.