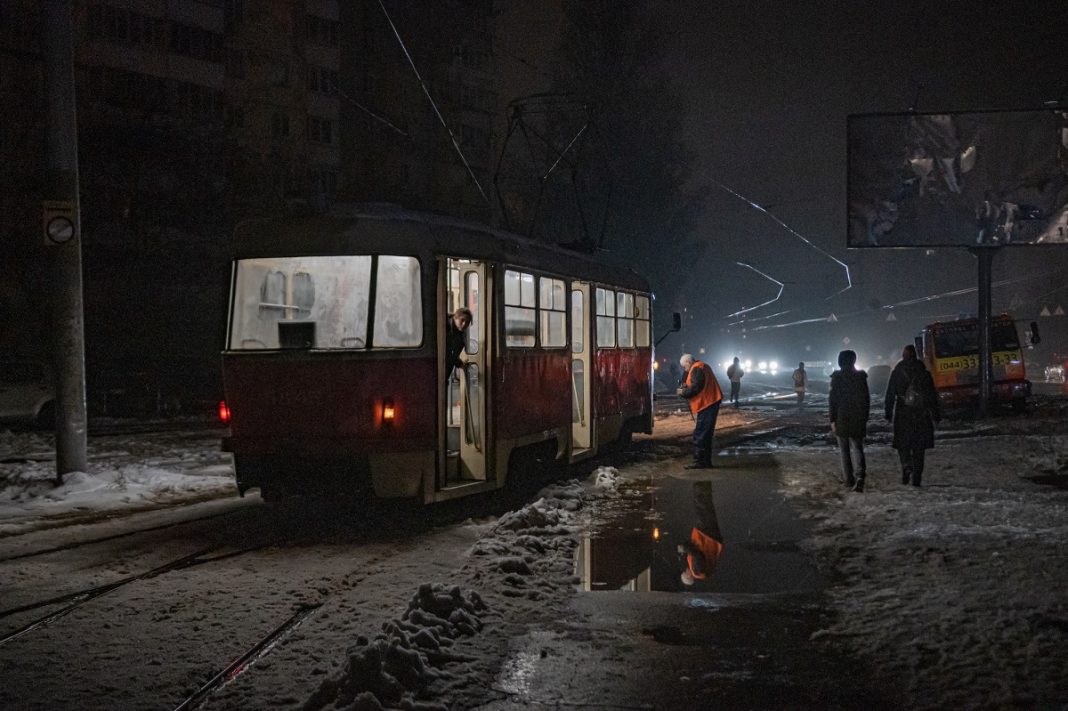 Civilians have been streaming out of the southern Ukrainian city whose recapture they had celebrated just weeks earlier but which has come under days of Russian artillery attack.

The exodus from Kherson came as Ukraine solemnly remembered a Stalin-era famine and sought to ensure that Russia’s war in Ukraine doesn’t deprive others worldwide of its vital food exports.

A line of trucks, vans and cars, some towing trailers or ferrying out pets and other belongings, stretched nearly a mile on the outskirts of the city on Saturday.

Days of intensive shelling by Russian forces prompted a bittersweet exodus: many civilians were happy that their city had been won back, but lamented that they couldn’t stay.

Tens of people in the Kherson region had been killed by Russian shelling since pro-Moscow forces pulled out two weeks ago, the head of Ukraine’s police has confirmed.

Armenian Prime Minister Nikol Pashinyan had called into question the effectiveness of the six-nation Collective Security Treaty Organisation (CSTO) at a summit this week.

Armenia requested assistance from the organisation in September, but received only a promise to send observers. Pashinyan contrasted that with the alliance’s rapid decision in January to send troops to CSTO member Kazakhstan to help President Kassym-Jomart Tokayev survive a wave of unrest.

“There have always been attempts to (bring about) the CSTO’s disintegration,” news agencies quoted Peskov as saying in an interview broadcast on state television.

Most houses in Kyiv with heat and water: Mayor

Kyiv Mayor Vitali Klitschko says heating has been restored in 90 percent of residential buildings in the capital, while the water supply resumed to every home.

One-quarter of the city’s residents are still missing electricity though, Klitschko added on his Telegram channel. Workers in the capital are hurrying to restore basic services in the capital with heavy snowfall expected.

His comments come after Klitschko was criticised by President Volodymyr Zelensky in a rare public rebuke.

Residents in Kyiv should have access to at least four hours of power per day, an energy provider in the capital has also said.

Sergey Kovalenko, chief operating officer of Yasno, stated that the situation in the city has improved but still remained “quite difficult.”

“If you haven’t had at least four hours of electricity in the past day, write to DTEK Kyiv Electric Networks, colleagues will help you figure out what the problem is,” Kovalenko wrote on social media.

Heavy snowfall is expected in Kyiv, with temperatures dropping below freezing day and night, while millions of people who still live in and around the Ukrainian capital remain with little electricity and heat.

Russian officials are continuing efforts to deport children to Russian under the guise of medical rehabilitation schemes and adoption programmes, the Institute for the Study of War think-tank has warned.

It cited the Ukrainian Resistance Centre as alleging that Russian-backed authorities in occupied Luhansk had conducted medical examinations of 15,000 children and concluded that 70 per cent of them were in need of “special medical care” requiring them to be removed to Russia for “treatment”.

Kyiv alleges that Russian officials intend for these forced deportation schemes to lure children’s families to Russia to collect their children, at which point it is feared they will be prevented from returning home.

The UK’s Ministry of Defence has said heavy fighting is taking place in Pavlivka and Vuhledar, two towns in eastern Donetsk province. There has been intense combat in the area over the last two weeks, it added.

“This area remains heavily contested, likely partially because Russia assesses the area has potential as a launch point for a future major advance north to capture the remainder of Ukrainian-held Donetsk Oblast,” the ministry announced.

“However, Russia is unlikely to be able to concentrate sufficient quality forces to achieve an operational breakthrough,” it noted.

European policymakers are to blame for the continent’s energy crisis, Russian Foreign Ministry spokeswoman Maria Zakharova said. But they have yet to sell the idea to their constituents that their economic woes are necessary, she added.

Speaking to Russian news channel TV Center, Zakharova claimed European leaders have “pushed Europe, in particular the European Union, towards a global energy collapse.” According to her, they still need to convince their citizens that the crisis “is not just good and right, but is in their own interests.”

“It’s a democracy test,” she continued.

Zakharova went on to say that European countries “did a good job” in the energy sphere – especially dealing with the blasts that ruptured the Nord Stream 1 and 2 pipelines in late September. “We are talking about the Baltic Sea, an area that is controlled by NATO countries… this is their area of responsibility,” she noted.

Western countries declared the blasts acts of sabotage. However, they refrained from jumping to conclusions or pointing fingers – a practice they do not follow if there is “an order to accuse Russia,” Zakharova continued.

Heavy snowfall to blanket Kyiv with millions cut off from electricity

Heavy snowfall is set to cover Kyiv starting Sunday and lasting until at least midweek, with the mercury dropping below freezing as millions living in Ukraine’s capital struggle without access to heat and electricity.

Restrictions on the use of the country’s scarce electricty resource remain in place across 14 regions and Kyiv, as President Volodymyr Zelensky has repeatedly used his nightly video addresses to urge citizens to use power sparingly.

It comes after Russian forces bombarded critical power generation sites across Ukraine and in the past week inflicted some of the worst damage so far on the country’s infrastructure, leaving millions of people with no light, water or heat.

Ukrainian power suppliers will not be able to provide a stable electricity supply to residents in the war-hit country as of yet, Volodymyr Zelensky said in his late night address.

“Today, our power engineers continued restoring the system – and we now have more opportunities to generate and supply electricity. But, unfortunately, not enough to make the supply completely stable,” he added.

At the peak of outages earlier this week well over 10 million Ukrainians were disconnected following a major Russian missile bombardment.

As of Saturday morning, Zelensky stated around half of these had been restored.

“However, in 14 regions and in Kyiv, there are still restrictions for more than a hundred thousand subscribers in each of the regions,” he continued.

The Ukrainian president warned that if consumption increases in the evening, the number of outages may increase. This “once again shows how important it is now to save power and consume it rationally”, he noted.

It is a new test of endurance for many in Kyiv and the surrounding regions who have already spent the last few weeks dealing with regular blackouts.

Heavy snowfall was expected in Kyiv starting Saturday and the temperatures are dropping below freezing day and night.

Electricity producers were able to provide only three-quarters of consumption needs, necessitating restrictions and blackouts across the country, Grid operator Ukrenergo announced.

Permanent Representative of Ukraine Mission to the UN Sergiy Kyslytsya honored the victims of the Holodomor, saying the suffering and death in Ukraine by Russia is “innumerable”.

He added that Russia’s aggression “only makes our nation stronger”.

The suffering and death brought to Ukraine by the Moscow dictators and the army of their henchmen are innumerable. Today we remember the victims of the Holodomor of 1932-33. pic.twitter.com/dOdQO8lWGt

“The weakest countries can’t have to pay the price for a war they didn’t want,” noted Macron in a video posted on Twitter.

Scholz says Germany will ‘probably’ get through the winter

German Chancellor Olaf Scholz believes Germany is prepared for the winter after Russia stopped gas flow after a dispute over the war in Ukraine.

“With all the decisions we have made, we can now say at this point before winter – we will probably get through this together,” Scholz said at a meeting of his centre-left Social Democrats.

More than 20 coal-fired power plants have been brought online or kept in operation, and the three existing nuclear power plants are running through the winter, he added.

Ukrainians are ‘once again fighting’ for their lives: EU

President of the European Parliament Roberta Metsola expressed her support for Ukraine on the anniversary of Holodomor.

She drew parallels between the current war in Ukraine and the famine 90 years ago, saying “Ukrainians are once again fighting to preserve their lives”.

“We remember all those who were left to starve to death by the Soviet regime,” she added.

15 killed and 35 injured as shelling in Kherson continues “round the clock”: Regional officials

Fifteen people in Ukraine’s southern city of Kherson were killed and 35 were injured, including one child, from Nov. 20 to 25, according to an update from the Kherson Civil Military Administration on Saturday

“The enemy keeps shelling de-occupied territory round the clock,” it said.

The city of Kherson has suffered the highest number of attacks, with hospital patients and patients of the Kherson Regional Institution for Psychiatric Care evacuated.

Authorities in Kherson are urging residents to leave the recently liberated city, much of which remains without power, before temperatures plunge further.

Russian troops renewed the shelling after Moscow’s troops were forced to retreat from the west bank of the Dnipro River.