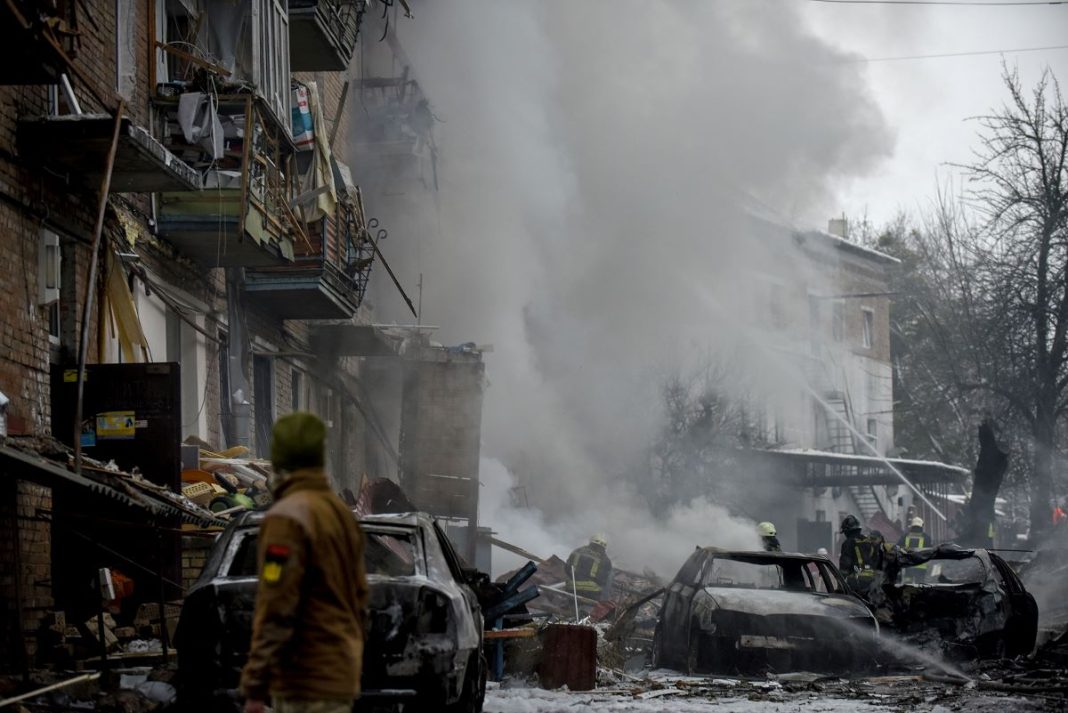 Schools in the Ukrainian capital Kyiv have opened their doors to residents who don’t have power at home.

Mayor Vitalii Klitschko stated the city had set up hundreds of power supply points in educational and other facilities, where people can get warm, drink tea and recharge telephones and flashlights.

“Kyiv has launched more than 400 heating points. These points will work every day,” Klitschko said in a post on Telegram.

“The majority of them are located in schools and other social facilities. In case there is no electricity supply in your house for more than a day, you will be able to come to the heating point to recharge gadgets or flashlights, drink tea and find out information about the nearest water pumps, shops and pharmacies,” he added.

Half of the city’s households were still without power on Friday morning after a large-scale Russian missile assault two days earlier hit power generation facilities across the country.

“Millions are being plunged into extreme hardship and appalling conditions of life by these strikes,” said Volker Turk in a statement.

“Taken as a whole, this raises serious problems under international humanitarian law, which requires a concrete and direct military advantage for each object attacked,” Turk added.

In the same statement, the UN’s preliminary analysis of videos showing Ukrainian soldiers executing Russian prisoners of war indicated they were “highly likely to be authentic”.

Retaking Crimea ‘out of question’: Kremlin

Russian presidential spokesman has stated Volodymyr Zelensky’s statement about retaking Crimea “by non-military means” is “out of the question”, reports TASS news agency.

Dmitry Peskov said: “For us, this is nothing but a discussion over an alienation of a territory from Russia. There can be no other understanding here. This is out of the question.”

“Such speculations indicate once again the unpreparedness, unwillingness and inability of the Ukrainian side to be ready to resolve the problem by non-military methods,” Peskov added.

Earlier on Friday, the air defence system was triggered in Armiansk in Crimea.

NATO to help Ukraine ‘as long as it takes’, no pressure for negotiations

NATO is determined to help Ukraine defend itself against Russia for “as long as it takes” and will help the country transform its armed forces to Western standards, Secretary-General Jens Stoltenberg said.

Stoltenberg urged countries, either individually or in groups, to keep providing air defence systems and other weapons to Ukraine, as NATO, as an organisation, does not supply weapons.

But the NATO chief put no pressure on Ukraine to enter peace talks with Russia.

“Most wars end with negotiations,” he continued, adding, “But what happens at the negotiating table depends on what happens on the battlefield. Therefore, the best way to increase the chances for a peaceful solution is to support Ukraine.”

“We are talking with our allies about how to handle Poland’s … suggestion,” Hoffmann noted in reference to Poland’s Defense Minister Mariusz Blaszczak saying Germany should send Patriot missile air defense systems directly to Ukraine instead of Poland.

“We are following very closely how discussions in Poland continue,” she added.

Hoffman said Germany does not want to “speculate” if Poland would change its mind on accepting its support, adding, “I don’t want to interpret what has been said.”

Blaszcak’s comments came after Germany offered Poland assistance in providing anti-missile systems, including the Patriot system, to Poland to help Warsaw strengthen its air defense capacity following a missile that landed on Polish territory near the Ukrainian border on Nov. 15.

The leaders of Poland and NATO have said the missile, which killed two people, was likely fired by Ukrainian forces defending their country against a barrage of Russian strikes, and that the incident appeared to be an accident.

German Chancellor Olaf Scholz and NATO Secretary General Jens Stoltenberg will be meeting twice in Berlin in the coming week, Hoffmann stated. She added that Germany’s proposal to Poland on Patriot systems will be “an issue for the chancellor.”

British foreign minister James Cleverly will pledge millions of pounds in further support for Kyiv as the harsh winter approaches.

A statement from his office said Cleverly had travelled to Ukraine and is set to meet President Volodymyr Zelensky and foreign minister Dmytro Kuleba on the trip.

“The UK stands shoulder to shoulder with Ukraine,” said Cleverly, as he set out 3 million pounds ($3.6m) to help rebuild vital infrastructure and committed another 5 million ($6m) for a Ukraine-led initiative to ship grain to countries at risk of famine.

“I’ve seen here first hand how the UK’s efforts are helping brave citizens to resist and rebuild. Our support will continue for as long as it takes for this remarkable country to recover,” he added.

Ukraine’s President Volodymyr Zelensky has called on Europeans to remain united against Russia’s war and to severely limit the price of Russian oil.

Zelensky said in an address via a live video link to a conference in Lithuania, “There is no split, there is no schism among Europeans, and we have to preserve this. This is our mission number one this year.

European Union governments remained split on Thursday over what level to cap Russian oil prices at, to curb Moscow’s ability to pay for the war.

Zelensky called on the EU leaders to settle on the lowest proposal of $30.

“The price cuts are very important. We hear about (proposals to set the cap per barrel at) $60 or $70. Such words sound more like a concession (to Russia)”, he noted.

The head of the International Energy Agency has stated that Europe will be able to cope with the current crunch on natural gas supply because of the reserves it has, however, the situation doesn’t look too promising for next winter.

Speaking at an energy symposium in Berlin hosted by the German government, Fatih Birol said that, barring unforeseen events, “Europe will go through this winter with some economic and social headaches, bruises here and there” as a result of efforts to wean itself off Russian gas and the wider increase in energy costs resulting from the war in Ukraine.

Birol noted that by next year, Russian gas supplies to Europe may end completely and emphasised that the European nations need to unite and start immediately preparing for next year’s situation.

With 75 percent of Russia’s gas exports and 55 percent of its oil going to Europe before the war, Moscow will also need to find new markets for its output, he added.

“Putin stressed that such actions go against the principles of market relations and are highly likely to lead to grave consequences for the global energy market,” according to the Kremlin’s readout of the call.

President Joe Biden stated a price cap on Russian oil that is proposed by the United States and its Western allies was in play, adding that he had spoken to Secretary of the Treasury Janet Yellen on the issue.

“It’s in play,” Biden told reporters during a Thanksgiving holiday visit to a fire station on Nantucket Island.

100 prisoners of war exchanged between Russia and Ukraine

Russia and Ukraine carried out a prisoner exchange Thursday with 100 soldiers in total returning to their respective home countries.

According to Russian and Ukrainian officials, each side returned 50 captive soldiers following negotiations.

“On November 24, as a result of the negotiation process, 50 Russian servicemen were returned from the territory controlled by the Kyiv regime, who were in mortal danger in captivity,” the Russian defense ministry said in a statement.

The soldiers will be taken to Moscow for treatment and provided with the “necessary medical and psychological assistance,” it added.

According to the office of the President of Ukraine, Andrii Yermak, two officers were among 50 returned soldiers who were captured in battles in Mariupol, Azovstal, Chernobyl power plant and Snake Island.

“We continue to work on the release of all our people from captivity. I am grateful for the work of the Coordination Headquarters for the Treatment of Prisoners of War. We will return everyone,” he announced in a statement.

Over the past two days, 86 Ukrainian service members have been returned and a total of 1,269 people have been released over the course of the Russian invasion, he added.

EU chief to discuss Russia, economy during meeting with Xi

European Union chief Charles Michel will be meeting with President Xi Jinping in Beijing next week to seek help in ending Russia’s war on Ukraine and address the economic imbalance between China and Europe.

“We will discuss global challenges as well as subjects of common interest,” Michel tweeted as he announced his trip.

Michel is expected to meet with Prime Minister Li Keqiang and Wu Bangguo, chairman of the standing committee of the Chinese People’s Congress during this trip as well.

A European official stated it was critical for Europe that China not provide weapons to Russia and not help Moscow evade EU and US economic sanctions.

Kyiv destruction is due to ‘foreign and Ukrainian air defence systems’: Russia

“I would like to emphasise that not a single strike was made on targets within the city of Kyiv,” Konashenkov stated in a daily video briefing.

“All the destruction announced by the Kyiv regime in the city was the result of the fall of missiles of foreign and Ukrainian air defence systems located in residential areas of the Ukrainian capital,” he added.