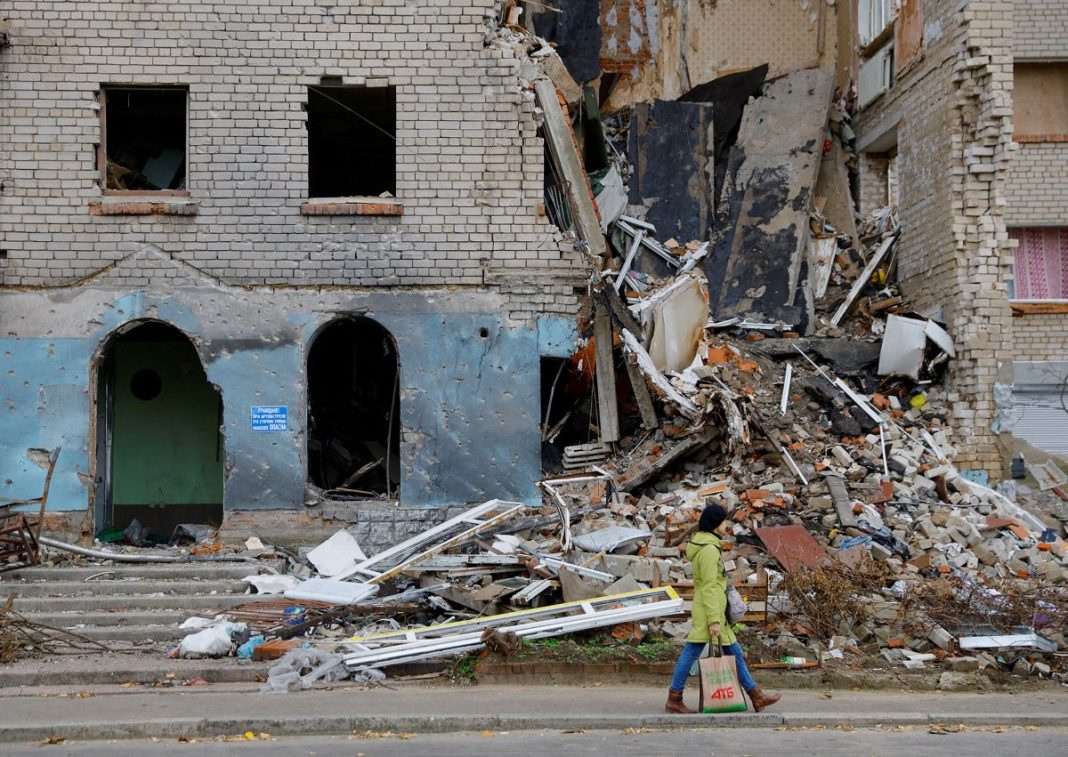 British Prime Minister Rishi Sunak is in Kyiv to meet with Ukrainian President Volodymyr Zelensky in a show of support for the country in his first visit since becoming UK leader.

“The Prime Minister is in Ukraine today for his first visit to Kyiv to meet President Zelenskyy and confirm continued UK support,” a Downing Street spokesperson said.

Zelensky posted a video on his official Telegram channel receiving Sunak in a snowy Kyiv.

“Since the first days of the war, Ukraine and the UK have been the strongest of allies. During today’s meeting, we discussed the most important issues both for our countries and for global security,” Zelensky said in the post.

“Together we are stronger, and we will achieve the desired results,” the Ukrainian president added.

Russia’s surge in missile attacks in Ukraine are partly designed to exhaust Ukraine’s supplies of air defences, a senior Pentagon official has said, something Moscow hopes would allow its forces to achieve dominance of the skies above Ukraine.

“They’re really trying to overwhelm and exhaust Ukrainian air defence systems,” Colin Kahl, the under secretary of defence for policy, told reporters during a trip to the Middle East.

“We know what the Russian theory of victory is, and we’re committed to making sure that’s not going to work by making sure that the Ukrainians get what they need to keep their air defences viable,” he added.

Peace in Ukraine ‘only’ possible after return to 1991 borders: Zelensky’s aide

Peace in Ukraine will “only” be possible if the country’s 1991 borders are restored, a senior aide to Ukrainian President Volodymyr Zelensky has said.

“There will be peace when we destroy the Russian army in Ukraine and reach the borders of 1991,” Andriy Yermak, the head of the presidential administration, wrote on the Telegram messaging app.

Such statements reflect Ukraine’s toughening stance on peace talks with Russia after evidence of atrocities committed by Russian soldiers emerged in April and since Ukrainian forces have made a number of successful counteroffensives in the northeast and south of the country.

Zelensky had previously demanded that Moscow’s troops withdraw to the pre-February invasion borders, which do not include Russian-annexed Crimea and eastern Donbas.

Russia has urged international organisations to condemn the alleged execution of Russian prisoners of war by Ukrainian soldiers.

Her comment came following the circulation of a video on social media which shows, the Kremlin says, the execution of 11 Russian soldiers taken prisoners in the eastern Luhansk region.

Ukrainian President Volodymyr Zelensky stated energy supply issues persist in the capital and 17 other regions Friday, even after utility officials indicated that power access had been restored across the country.

Speaking in his nightly address, Zelensky said it’s still difficult to get enough electricity to “Kyiv region and Kyiv. It’s very difficult in the Odesa region, and also the Vinnytsia region and Ternopil region.”

The director of Ukraine’s Energy Industry Research Center announced earlier Friday that power had been restored nearly everywhere in the country, after 10 million customers lost service due to missile attacks Thursday.

Even when utilities repair infrastructure in Ukraine and customers regain access, operators have had to widely impose emergency cuts to deal with the country’s diminished supply. That means regions only receive a limited amount of energy and are sometimes subject to intentional blackouts aimed at stabilizing and maintaining the fragile grid.

The first train from Kyiv to the recently liberated city of Kherson left Friday.

“This is our train of victory!” Kyrylo Tymoshenko, deputy head of the Office of the President of Ukraine, said on Telegram.

There were about 200 passengers on board.

“Like this train, we will return to Kherson everything for normal life!” Tymoshenko added.

The return of the city, which was the only regional capital held by the Kremlin’s forces, brought scenes of jubilation in the streets, where locals sang, waved flags and embraced Ukrainian soldiers.

Much work remains to restore basic services to the city and the region surrounding it, however, and Ukrainian officials are now investigating the brutality and torture suffered by detainees in the city.

Power has been restored for nearly 100% of Ukrainians: Energy official

Power has been restored nearly everywhere in Ukraine after more than 10 million customers were disconnected Thursday, according to Oleksandr Kharchenko, the director of the Energy Industry Research Center.

“Maybe nearly 300 consumers are still out of connection, but most of them are near the frontline,” Kharchenko told reporters Friday, while giving updates on restoration work after Thursday’s missile attacks on Ukraine’s energy infrastructure.

The situation is getting better with each hour, he said, adding that he hopes “we can have at least 10- to 12-days pause so that we can restore the network sustainability.”

“The power units shut down for several hours and diesel generators had to be used. Nevertheless, the situation is much better now, access to the network of most power units has been restored and I think that in the near future we will be able to resume their work,” Kharchenko continued.

He noted that a lack of electricity affects not just power but also mobile phone networks, electrical pumps used to supply water and waste treatment. Several cities, including Kyiv, were without water for four to 10 hours.

Ukrainian experts have arrived at the scene of an explsion in Poland after a missile hit a border village that left two dead.

Ukraine’s Minister of Defence Dmytro Kuleba tweeted, “Ukrainian experts are already working at the site of the tragedy in Przewodów caused by Russian missile terror against Ukraine.

“I am grateful to the Polish side for granting them access. We will continue our cooperation in an open and constructive manner, as closest friends do,” he added.

NATO and Poland believe, after initial investigations, that the missile that hit Poland likely came from Ukraine’s air defence system.

War in Ukraine is Asia’s problem too: Macron

French President Emmanuel Macron urges Asian countries to join the “increasing consensus” against the conflict in Ukraine, telling them the war was “your problem”, too.

Macron told business leaders on the sidelines of a Pacific Rim summit that France was trying to “create an increasing consensus in order to say that this war is also your problem, because it will create a lot of destabilisation”.

The EU’s energy policy chief told the Reuters news agency that the European Union expects to have its regulations completed before introducing a G7 plan to cap the price of Russian crude oil on December 5.

The EU will ban Russian crude imports from that date and Russian oil products from February 5.

EU energy commissioner Kadri Simson noted, “Our sanctions will cover crude for EU member states, so we will not buy Russian crude oil starting from December 5 and we covered the possible oil price gap for international buyers with our eighth package of sanctions.”

“If the G7 will decide the exact price cap level, we also will need a council mandate for that,” she stated on the sidelines of the COP 27 climate summit in Egypt this week.”

In addition, a G7 plan, intended as an add-on to the EU embargo, will allow shipping services providers to help to export Russian oil, but only at enforced low prices.

This is also set to take effect on December 5.

Moscow to work with Qatar on stabilising gas market: Putin

Putin congratulated Qatar on hosting the upcoming FIFA World Cup, which kicks off this weekend.

FIFA banned Russia, which hosted the previous tournament in 2018, from participating in its competitions earlier this year in response to Russia’s invasion of Ukraine.

Ukraine announced almost half of the country’s power infrastructure needs repair following waves of Russian aerial attacks that have disrupted electricity supplies for millions of Ukrainians.

“Only on November 15, Russia fired about 100 missiles at Ukrainian cities. Nearly half of our energy system has been disabled,” Prime Minister Denys Shmygal said while appealing to Ukraine’s European allies for support.

Kremlin: Western countries could be “guiding” element in negotiations with Ukraine

The West could be a “guiding and reinforcing element” for Kyiv in any negotiations with Moscow over the war in Ukraine, according to the Kremlin.

“Directives” from those countries are “very scrupulously implemented by Kyiv,” he added.

The Kremlin repeatedly accused Ukrainian authorities of withdrawing from negotiations with Moscow and demonstrating an unwillingness to resume talks, amid renewed Russian attacks on Ukrainian infrastructure and energy facilities.

The tense diplomatic relationship between both countries further unraveled after Russia launched its invasion of Ukraine in February.

As the war approaches the nine-month mark, Zelensky proposed a 10-point peace plan in front of world leaders at the G20 summit on Tuesday.