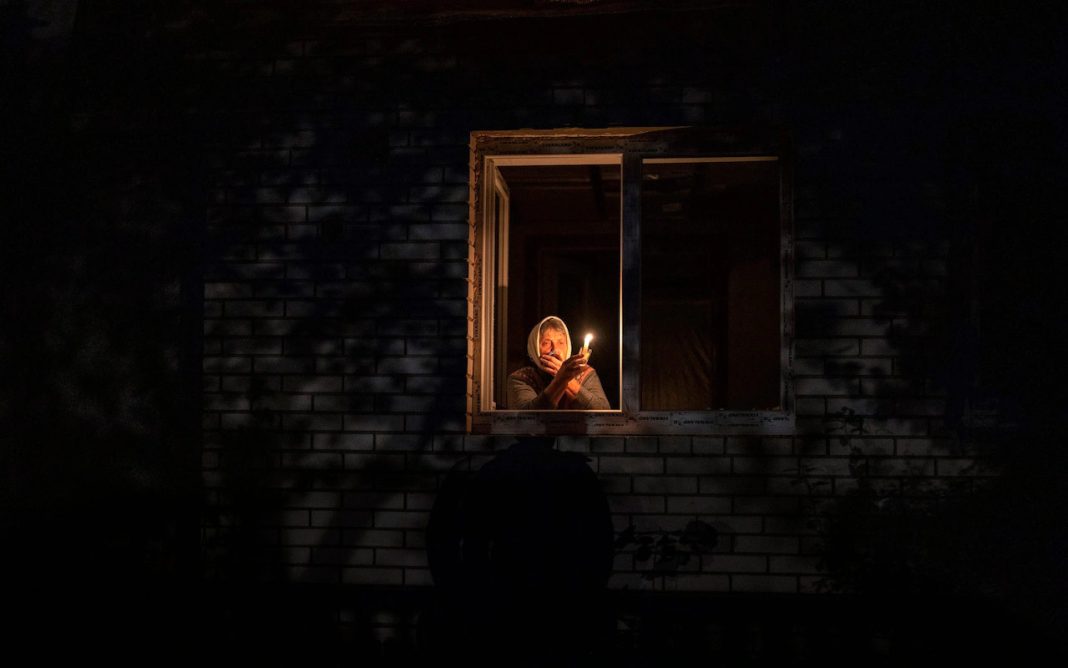 British defense minister Ben Wallace on Sunday refuted claims by his Russian counterpart Sergei Shoigu that Ukraine was planning to escalate the conflict with help from Western countries.

Wallace warned Shoigu that “such allegations should not be used as a pretext for greater escalation,” according to a statement from the ministry. Wallace “observed that both Ministers were professional and respectful on the call,” the statement added.

Shoigu warned Wallace of his concerns Ukraine would use a “dirty bomb,” against Russia, according to a Russian Defense Ministry statement.

Ukrainian Minister of Foreign Affairs Dmytro Kuleba vehemently dismissed the suggestion his country would use such a bomb — a weapon that combines radioactive material with conventional explosives.

“Russian lies about Ukraine allegedly planning to use a ‘dirty bomb’ are as absurd as they are dangerous. Firstly, Ukraine is a committed NPT (nuclear non-proliferation treaty) member: we neither have any ‘dirty bombs’, nor plan to acquire any. Secondly, Russians often accuse others of what they plan themselves,” Kuleba tweeted Sunday.

“France calls on Russia to put an end to its war of aggression against Ukraine and to do everything possible to contribute to de-escalation,” Lecornu said, according to a readout of the conversation shared by France’s Ministry of the Armed Forces.

The statement added that French President Emmanuel Macron’s government is “determined to contribute to a peaceful resolution of the conflict” and that the French and Russian defense ministers would stay in contact.

Lecornu would be meeting his Ukrainian counterpart “shortly,” the statement concluded.

Russian troops are falling back in Kherson: Ukrainian official

Russia’s military is pulling troops back from positions on the Dnipro River in the southern Kherson region, according to a Ukrainian official.

“They are moving their elite units and officers from the west bank, leaving only those who are mobilized and expendable,” Natalia Humeniuk, a spokesperson for Ukraine’s military, said Sunday.

“We continue to move the front line. But they are firmly ensconced behind their defensive line,” Humeniuk continued, adding, “They are trying to concentrate their forces on the east bank.”

Kherson — a gateway to Crimea near the Black Sea — was annexed by Russia last month amid wide international condemnation.

Russia claims it has not lost ground to Ukraine in Kherson but is evacuating civilians for their own safety, moving them east.

“The evacuation of the city of Kherson continues. We provide maximum assistance to all those traveling to the eastern part of the Kherson region and other subjects of the Russian Federation,” Kirill Stremousov, a Russian-appointed official in Kherson, noted Sunday.

Ukraine accuses Russia of creating “hysteria” as a justification to forcibly remove residents.

Europe faces painful “industrial rationalisation” due to its energy crisis that risks political trouble, the head of Shell warned on Sunday, as the oil giant joined a natural gas project in Qatar.

Shell chief executive Ben van Beurden agreed a deal for a 9.3 percent stake in Qatar Energy’s North Field South project, that will play a major role in the Persian Gulf state’s effort to increase liquefied natural gas production by 50 per cent in the next five years.

At the signing ceremony in Doha, van Beurden stated European industry face taking a major hit from the energy crisis, worsened by the Russian invasion of Ukraine.

Kyiv’s energy operator announced on Sunday that scheduled “stabilisation” power cuts have been introduced in the Ukrainian capital after repeated Russian strikes on the country’s energy infrastructure.

“On October 23, stabilisation shutdowns were introduced in Kyiv by national energy operator Ukrenergo to avoid accidents,” energy company DTEK said in a statement, adding that the blackouts should last “no more than four hours” but may be longer “due to the scale of damage to the power supply system”.

Russia’s military leadership has withdrawn its officers in the Russian-annexed city of Kherson across the Dnieper River in anticipation of an advance of Ukrainian troops, the Institute for the Study of War think tank said on Sunday.

To delay the Ukrainian counteroffensive as the Russians complete their retreat, Moscow has left newly mobilised, inexperienced forces on the other side of the wide river, it added.

The troop movements come as the Ukrainian military announced its forces have continued their counteroffensives in the Kherson and Zaporizhzhia regions.

“The situation in Ukraine, which has a steady tendency towards further, uncontrolled escalation, was discussed,” by Shoigu and France’s Sebastien Lecornu, the ministry added.

In all three calls, Shoigu conveyed “concerns about possible provocations by Ukraine with the use of a ‘dirty bomb'”.

President Volodymyr Zelensky has accused Russia of launching strikes on infrastructure on a “very wide” scale.

He pledged that his military would improve on an already strong record of downing missiles with help from its Western partners.

“The geography of this latest mass strike is very wide,” Zelensky said, citing regions in western, central and southern Ukraine.

“Of course we don’t have the technical ability to knock down 100 per cent of the Russian missiles and strike drones,” he continued, adding, “I am sure that, gradually, we will achieve that, with help from our partners. Already now, we are downing a majority of cruise missiles, a majority of drones.”

More than a million people in Ukraine are without power, presidential adviser Kyrylo Tymoshenko has stated.

Parts of Kyiv suffered power cuts into the evening, and a city official warned strikes could leave Ukraine’s capital without power and heat for “several days or weeks”.

Kuleba questioned whether Russia should still occupy the seat of a permanent member of the United Nations Security Council.

“After committing the crime of aggression against Ukraine, numerous war crimes, undermining global food and energy security, should Russia still occupy the seat of a permanent member of the UN Security Council? Remember that Russia is there on dubious legal grounds,” he wrote on Twitter.

The Group of Seven (G7) industrialised nations have condemned Russia’s kidnapping of the Zaporizhzhia nuclear power plant leadership and called for the immediate return of full control of the plant to Ukraine.

“We urge Russia to immediately return full control of the ZNPP to its rightful sovereign owner, Ukraine,” it added.

Russian forces have been in control of the nuclear plant, Europe’s largest, since the early days of their invasion of Ukraine.

Thousands of civilians have left Kherson after warnings of a Ukrainian offensive to recapture the city.

Ukraine’s military announced it was making gains as its forces moved south through the region, taking over at least two villages it said Russian troops had abandoned.

Kherson links Ukraine to the Crimean Peninsula, which was annexed by Russia in 2014.

Ukrainians cutting electricity use by up to 20 percent

Some parts of Ukraine are reducing electricity use by up to 20 percent, national energy operator Ukrenergo told AFP, with authorities calling on residents to save power in the wake of Russian strikes on energy facilities.

“We are grateful to both people, who have reduced their consumption at home, and to businesses, who are doing the same in their offices and workplaces,” Ukrenergo chief Volodymyr Kudrytskyi said in written comments to AFP.

“We see savings in different regions and on different days the level of voluntary consumption reduction ranges from five to 20 percent on average,” he added.

Spain has announced it would send 14 fighter jets to Bulgaria and Romania to bolster NATO’s eastern flank as the defence alliance strengthens its deterrence capacity amid Russia’s invasion of Ukraine.

Madrid will send six Eurofighter jets and 130 soldiers to Bulgaria between mid-November and early December to train local forces, the Spanish defence ministry said in a statement.

It added that the country will further deploy eight F18M fighter jets and 130 air force personnel sent to Romania between December and March 2023 as part of NATO’s “reaction and deterrence” strategy.

The country has already sent 12 fighter jets to eastern NATO members Bulgaria, Lithuania and Estonia since Russia invaded its pro-Western neighbour in February.

Tens of thousands of protesters in six German cities gathered to demand a more just distribution of government funds to deal with rising energy prices and living costs amid the war in Ukraine, as well as a faster transition away from fossil fuels.

Demonstrators marched in Berlin, Duesseldorf, Hannover, Stuttgart, Dresden and Frankfurt am Main, holding signs bearing slogans on everything from lowering inflation to switching off nuclear power and more energy price subsidies for the poor.

About 24,000 people participated, according to Greenpeace, one of the organisers. Police said about 1,800 protesters gathered in Berlin.

Germany’s parliament on Friday approved the government’s 200 billion euros ($195bn) rescue package which aims to protect companies and households from the effect of soaring energy prices.

Over a million Ukraine households without power after Russian strikes: Presidency

More than a million households in Ukraine have been left without electricity following Russian strikes on energy facilities across the country, according to the deputy head of the Ukrainian presidency.

Several regions across the country reported strikes on energy facilities in a barrage of overnight attacks.