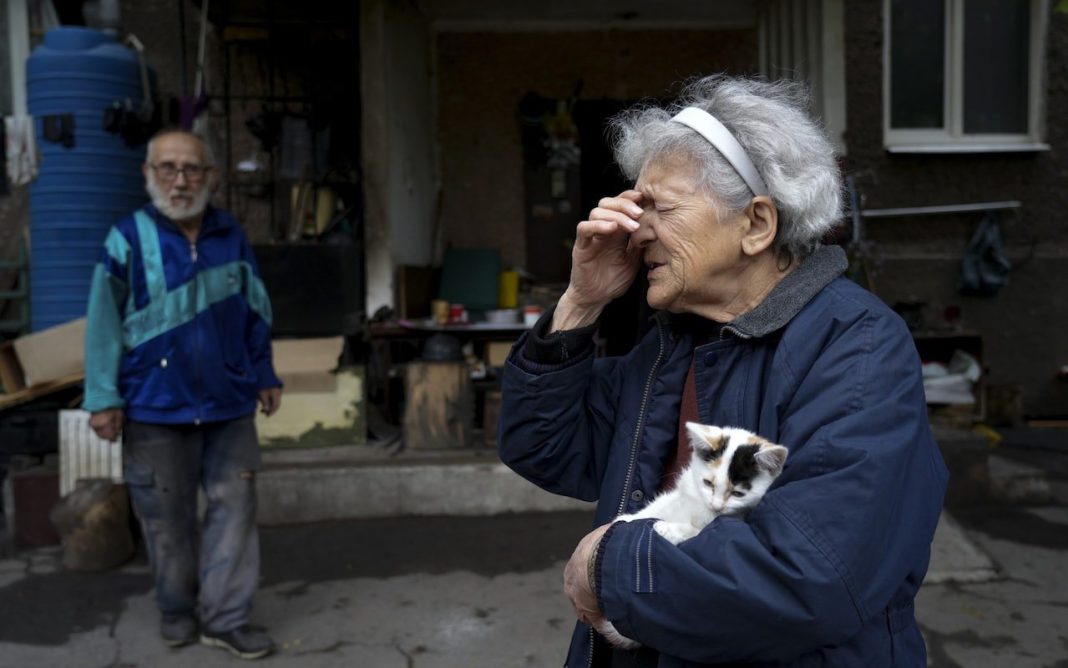 Mykhailo Podolyak, an advisor to the head of the president’s office, tweeted that those supporting the application were “mostly countries that remember [the] poisonous claws of [the Russian] empire.”

He added: “we are grateful for the leadership and responsibility. History is being made today.”

The Ukraine’s President announced on Friday that he was applying to join NATO and signed an expedited application to join the security alliance of 30 states.

The presidents of nine NATO countries in central and eastern Europe declared they would never recognise the annexation by Russia of the four Moscow-occupied regions of Ukraine of Donetsk, Kherson, Luhansk and Zaporizhzhia.

The presidents issued a joint statement saying they could not “stay silent in the face of the blatant violation of international law by the Russian Federation”.

“We reiterate our support for the sovereignty and territorial integrity of Ukraine,” they stated, adding, “We do not recognise and will never recognise Russian attempts to annex any Ukrainian territory.”

The statement was issued by the presidents of the Czech Republic, Estonia, Latvia, Lithuania, Montenegro, North Macedonia, Poland, Romania and Slovakia.

“There have never been such incidents. Of course, there are technical possibilities to restore the infrastructure, it takes time and appropriate funds. I am sure that appropriate possibilities will be found,” he stated.

Germany, Denmark and Norway will buy 16 Slovak Zuzana-2 howitzers for Ukraine, the German Defence Ministry said on Sunday, with delivery to begin next year.

The guns, which can fire six projectiles a minute over a distance of 40 km, will be built in Slovakia, the ministry added.

The three countries will spend 92 million euros on the systems.

Ukraine, which has scored notable battlefield successes against Russia in recent weeks, says it needs more and heavier armaments in order to repulse the invasion that Moscow launched in February.

The head of the United Nations nuclear watchdog has called for the release of the director-general of Ukraine’s Russian-occupied Zaporizhzhia nuclear power plant, saying his detention posed a threat to safety and security.

A Russian patrol detained Ihor Murashov on September 30, the state-owned company in charge of the plant said, and the International Atomic Energy Agency (IAEA) said Russia had confirmed the move.

“IAEA Director General Rafael Grossi expressed the hope that Mr Murashov will return to his family safely and promptly and will be able to resume his important functions at the plant,” the agency tweeted late on Saturday.

The IAEA has been in contact with relevant authorities seeking clarifications on his temporary detention, which it said had a “very significant impact” on him and nuclear safety and security standards.

Moscow announced on Saturday its troops had decided to withdraw from their months-long stronghold in the north of Donetsk region.

“As of 09:30 GMT, Lyman is fully cleared,” Zelensky said in a short video clip on his Telegram channel.

The court ruled to “recognise…as corresponding to the constitution of the Russian Federation” accords for Ukraine’s Donetsk, Kherson, Lugansk and Zaporizhzhia to become part of Russia.

Pope appeals to Putin to end ‘spiral of violence’ in Ukraine

Pope Francis has appealed to Russian President Vladimir Putin, imploring him to “stop this spiral of violence and death” in Ukraine, and denounced what he called the “absurd” risk of nuclear war.

Francis made his strongest appeal yet on the seventh-month war as he addressed the public in St Peter’s Square.

The pontiff also called on President Volodymyr Zelensky to “be open” to serious peace proposals. He also exhorted the international community to “use all diplomatic instruments” to end this “huge tragedy” and “horror” of war.

Russia has probably suffered heavy losses as its forces retreated from the strategically important eastern Ukrainian town of Lyman, according to British military intelligence.

The town in the Donetsk region was “likely being defended by undermanned elements of Russia’s Western and Central Military Districts as well as contingents of voluntarily mobilized reservists,” the British defence ministry’s daily brief said.

“The force probably experienced heavy casualties as it withdrew along the only road out of the town still in Russian hands,” it continued.

According to him, Kiev’s desire to join the alliance is understandable “but this is not the main issue at this time.”

The EU’s top diplomat thinks that it is more important to support Ukraine’s defensive ability.

On Friday, Ukrainian President Vladimir Zelensky signed an application for a fast-tracked NATO membership. That said, NATO Secretary General Jens Stoltenberg did not reply to a direct question by journalists as to whether the alliance was ready to review this application.

The Ukrainian armed forces have updated their estimate of Russian casualties in the war so far.

They claim that around 60,110 Russian soldiers have been killed and 2,377 tanks destroyed.

They added Moscow lost 500 soldiers in the last 24 hours, suffering the greatest losses in Kramatorsk and Bakhmut.

ISW: Russia unable to operate on a nuclear battlefield

The Institute for the Study of War (ISW), a Washington-based thinktank, has announced the Russian military in its current state was almost certainly unable to operate on a nuclear battlefield, even though it has historically trained its units to do so.

“The chaotic agglomeration of exhausted contract soldiers, hastily mobilised reservists, conscripts and mercenaries that currently comprise the Russian ground forces could not function in a nuclear environment,” Reuters reported ISW analysts as saying.

“Any areas affected by Russian tactical nuclear weapons would thus be impassable for the Russians, likely precluding Russian advances,” it added.

Ukrainian President Volodymyr Zelensky has revealed that fighting was continuing in the strategic town of Lyman, despite Russian claims of retreating from the city.

“The Ukrainian flag is already in Lyman in the Donetsk region. Fighting is still going on there,” Zelenskyy stated.

Ukraine’s defence ministry had said its forces were “entering” the key town of Lyman in the eastern Donetsk region.

“Ukrainian Air Assault Forces are entering Lyman, Donetsk region,” the ministry wrote on Twitter, posting a video of soldiers holding up a yellow and blue Ukrainian flag near a sign with the town’s name.

Russia’s defence ministry has confirmed its troops had withdrawn from the town of Lyman in eastern Ukraine to avoid being surrounded by Ukraine’s army.

“In connection with the creation of a threat of encirclement, allied troops were withdrawn from the settlement of Krasny Liman to more advantageous lines,” the ministry announced, using the Russian name of the town, the Reuters news agency reported.

IAEA chief is expected to visit Moscow and Kyiv

United Nations nuclear watchdog chief Rafael Grossi is expected to hold talks in Moscow and Kyiv next week on the creation of a protection zone around the Russian-held Zaporizhzhia nuclear power plant (ZNPP) in Ukraine, the watchdog said in a statement on Saturday.

“Director General Grossi continues his consultations and other efforts aimed at agreeing and implementing a nuclear safety and security zone around the ZNPP as soon as possible. He is expected to travel to Kyiv and Moscow next week,” the International Atomic Energy Agency added.

Germany will deliver the first of four advanced IRIS-T air defence systems to Ukraine in the coming days to help ward off drone attacks, its defence minister, Christine Lambrecht, said during her visit to Odesa.

“In a few days, we will deliver the very modern IRIS-T air defence system,” she told ARD television.

“It is very important for drone defence, in particular,” she added.

Speaking at the opening ceremony of the Gas Interconnector Greece-Bulgaria pipeline in Sofia, chief of the European Commission Ursula von der Leyen has described the pipeline as a “game changer”.

“And it means freedom,” von der Leyen told an audience which included heads of states and governments from the region.

The 182-kilometer (115-mile) pipeline will run from the northeastern Greek city of Komotini, where it is linked to the Trans-Adriatic Pipeline, up to Stara Zagora in central Bulgaria.

United Nations inspectors boarded ships anchored off the coast of Istanbul to make inspections as part of the Black Sea Grain Initiative and joint coordination efforts managed by the United Nations together with Turkey, Russia, and Ukraine.

A United Nations inspector on one of the ships, Averi Nissanka, told The Associated Press news agency that inspectors are assigned to ships daily by the Joint Coordination Center, which has delegations representing the maritime elements of Russia, Turkey, Ukraine and the United Nations.

“There are different countries, different perspectives, but these people work together for a same objective”, Nissanka said. “So we usually do like three vessels per day,” he added.

Inspectors representing all parties at the Bosporus in Turkey have been searching vessels entering and leaving Ukrainian ports to ensure no weapons or soldiers are on board, a clause of the agreement signed heavily insisted on by Russia.

“In the Kupyansk district, a shot-at convoy of cars containing civilians was found. According to preliminary data, 20 people died in the cars,” Kharkiv Governor Oleg Synegubov noted on the Telegram messenger site.

Synegubov put the preliminary death toll at 24 including a pregnant woman and 13 children.

Russia failed to win enough votes for re-election to the United Nation’s aviation agency’s governing council on Saturday, in a boost for Western powers that wanted to hold Moscow accountable following its invasion of Ukraine.

Russia fell short of the votes needed to stay on the International Civil Aviation Organization’s (ICAO) 36-nation governing council, during the agency’s assembly which runs through October 7 in Montreal.

Chechnya’s Kadyrov calls for use of ‘low-yield’ nuclear weapons

Ramzan Kadyrov, head of Russia’s region of Chechnya, has stated that Moscow should consider using a low-yield nuclear weapon in Ukraine after a significant new defeat on the battlefield.

Kadyrov slammed top commanders for their failings and wrote on Telegram, “In my personal opinion, more drastic measures should be taken, right up to the declaration of martial law in the border areas and the use of low-yield nuclear weapons.”

Russian Minister of Defence Sergei Shoigu inspected accommodation facilities for recruits at a military facility outside Moscow, the ministry announced.

The defence ministry shared a video showing Shoigu and Moscow Mayor Sergei Sobyanin visiting the accommodation site, as well as recruits at a shooting exercise.

When asked by a journalist if women will be called up for the partial mobilisation ordered last month, Shoigu said, “No. No, this was not in the plans and is not in the plans for the future. We do not plan and are not going to call up women.”

The Danish Energy Agency says one of two ruptured natural gas pipelines in the Baltic Sea appears to have stopped leaking gas.

The agency posted on Twitter that it had been informed by the company operating the Nord Stream 2 pipeline that pressure appears to have stabilised in the pipeline, which runs from Russia to Germany.

“This indicates that the leaking of gas in this pipeline has ceased,” the Danish Energy Agency said.