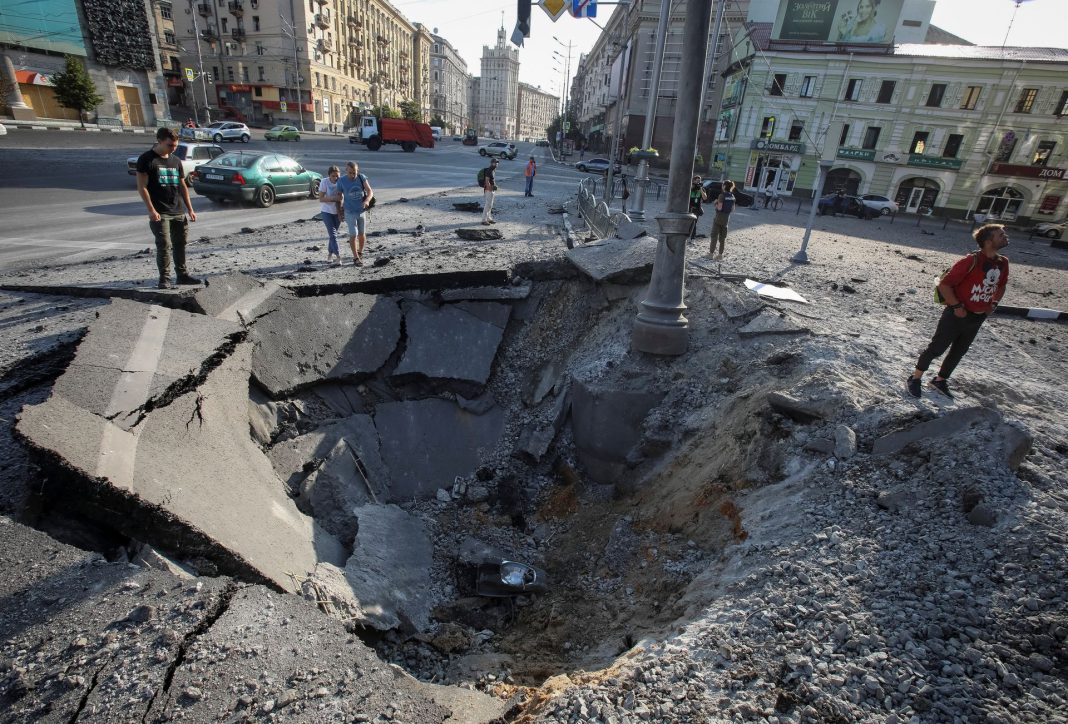 European Union foreign ministers are set to unify behind suspending the bloc’s preferential treatment of Russians applying for visas, according to the Financial Times.

The foreign ministers plan to initially give political support to suspending a 2007 deal between the bloc and Russia, which would create more document requirements, longer wait times and higher fees for Russian tourists applying for visas, three officials told the newspaper.

There is no consensus on what steps the bloc would take beyond that, with several countries, including Germany, opposing an outright ban.

Ukrainian and Russian officials say there has been no increase in radiation levels at the Zaporizhzhia nuclear power plant following the latest shelling around the Russian-occupied site.

Both sides have accused the other of shelling the sprawling complex for weeks, raising fears of a widespread disaster at Europe’s largest nuclear plant.

More grain shipped across Danube than at any time since conflict: Ukraine

Ukrainian authorities have said more grain is being shipped across the Danube River than at any point since Russia’s invasion began.

Since March, more than 4 million tonnes of grain have been taken out of the country through Ukraine’s Danube ports, according to the Ukrainian Infrastructure Ministry. On Saturday, 11 ships made their way to the river ports of Izmail, Reni and Ust-Dunaysk and loaded a total of 45,000 tonnes of grain, the ministry said on Sunday.

On July 22, Ukraine and Russia, under UN mediation, signed an agreement with Turkey to allow exports from Ukraine from three Black Sea ports, relieving pressure on global food markets.

The Istanbul Coordination Center, which was established under the deal, said on Saturday that 1 million tonnes of grain and other foodstuffs had been exported through the Black Sea route so far. A total of 103 ships had set sail either to or from Ukraine.

The Russian air force has struck workshops at a Motor Sich factory in the Zaporizhia region of Ukraine where helicopters were being repaired, Russian state news agency RIA has quoted the defence ministry as saying.

Fighting has continued overnight near the Zaporizhzhia nuclear plant, according to local Ukrainian officials.

In Nikopol, heavy firing during the night left parts of the city without electricity, said Valentyn Reznichenko, governor of the Dnipropetrovsk region.

Rocket strikes damaged about a dozen residences in Marhanets, according to Yevhen Yevtushenko, the administrative head for the district that includes the city of about 45,000.

The EU will encounter “major challenges” due to the sanctions it imposed on Russia over the conflict in Ukraine, the EU’s Foreign Policy Chief Josep Borrell said.

The issue was raised during Borrell’s interview with the Austrian newspaper Kronen Zeitung, with journalists pointing out that many people in their country are “skeptical” about the anti-Russia measures.

The diplomat responded that the sanctions are working, and that “Russia is in trouble”.

“These are restrictive measures. We’ve limited Russia’s economic possibilities. As long as Russia’s economy is dependent on oil and gas, they’ll be needing our technologies,” he added.

However, Borrell acknowledged that “of course, we are facing major challenges in the short term” because of the sanctions, and “there is no denying that the price of gas is rising”.

According to the diplomat, Europeans “must be willing to pay the price for freedom, because the war in Ukraine isn’t only a war of the Ukrainians, but a war for our freedom”.

UK says it is unclear how Russia will recruit more soldiers

The UK’s defence ministry has announced it was not yet clear how Russia would achieve an announced large increase in its armed forces, but the boost was unlikely to substantially increase its combat power in Ukraine.

Russian President Vladimir Putin signed a decree last week to increase the size of Russia’s armed forces to 2.04 million from 1.9 million as the war in Ukraine enters its seventh month.

The UK defence ministry said in a regular update on the war that it was not clear if this would be achieved by recruiting more volunteers or by increasing conscription.

Either way it would likely not have a big impact on the war in Ukraine given “Russia has lost tens of thousands of troops; very few new contract servicemen are being recruited; and conscripts are technically not obliged to serve outside of Russian territory,” the ministry added.

Fighting has continued in the south and east of Ukraine, with Ukrainian forces pushing ahead with a counter-offensive centred around the the city of Kherson, which was captured by Russian troops shortly after the invasion was launched on February 24.

Ukrainian strategy has focussed on destroying four bridges Russian forces must hold to supply Kherson, located at the southern end of the Dnipro river.

In the eastern Donbas region, Russian forces were continuing to target the strategic city of Bakhmut, which was shelled again Saturday, according to Russian a Ukrainian military report.

Still, Ukraine has been able to stave off the Russian advance at Bakhmut and near Sloviansk and Kramatorsk, according to the military.

The Russian defence ministry said in a daily briefing on Saturday that it had destroyed a large ammunition depot in Ukraine’s Dnipropetrovsk region that had contained US-made HIMARS rocket systems and shells for M777 Howitzers.

The announcement in June that Washington would provide the rocket systems, which are lightweight and easily maneuverable while generally considered more accurate than other systems, was considered a major battlefield gain for Ukraine.

The Russian Air Force on Saturday also added it shot down a MiG-29 aircraft in the Donetsk region in the Donbas, destroying six missile and artillery weapons depots in the Donetsk, Mykolaiv and Kherson regions.

Australia’s defence minister has said he aims to deepen defence ties with France, Germany and Britain during visits this week.

The trip, beginning on Monday, will be Richard Marles’ first since centre-left Labor won a general election in May.

“My visit to Europe comes at a time when the war in Ukraine has shown the importance of increasing cooperation with likeminded partners, both in Europe and the Indo-Pacific,” he stated.

European Commission President Ursula von der Leyen has said that “evil will not have the last word” in the conflict in Ukraine.

She was speaking at an event at the Taize Christian religious community in eastern France, and stated she was quoting the words of Brother Alois, the prior of the community.

Russia to give benefits to people arriving from Ukraine

Monthly pension payments of 10,000 roubles ($170) will be given to people who have been forced to leave Ukraine since February 18. Disabled people will also be eligible for the same monthly support, while pregnant women are entitled to a one-off benefit.

The decree says the payments will be made to citizens of Ukraine and the self-styled Donetsk and Luhansk People’s Republics – two breakaway Russian-backed entities in eastern Ukraine that Moscow recognised as independent in February in a move condemned by Ukraine and the West as illegal.

On February 18, Putin ordered every person who arrived in Russia from Donetsk and Luhansk to be given a payment of 10,000 roubles ($170), Reuters reported.

Both Germany and France reported that they expected electricity prices next year to increase tenfold over those this year.

The EU presidency has announced it will hold an emergency summit to address the crisis as the winter months approach.

UK will give underwater drones to Ukraine, train Ukrainian personnel

The UK is giving underwater drones to Ukraine and training Ukrainian personnel in the UK to use them to clear their coastline of mines, the country’s Ministry of Defence has announced.

Six autonomous minehunting vehicles will be sent to the country to help detect Russian mines in the waters off its coast, the ministry said. Three of these will be provided from UK stocks, with a further three to be bought from industry.

The lightweight autonomous vehicle is designed for use in shallow coastal environments, operating effectively at depths of up to 100 metres (328 feet) to detect, locate and identify mines using an array of sensors so the Ukrainian navy can destroy them.

Moscow eases policy for Ukrainians to live, work in Russia

President Vladimir Putin has signed a decree allowing Ukrainian passport holders who have entered Russia since its invasion in to live and work in the country indefinitely.

Up until now, Ukrainians could only stay in Russia for a maximum of 90 days within a 180-day period. To stay longer or to work, one had to get special authorisation or a work permit.

The new measure allows Ukrainian citizens and people from Ukraine’s separatist eastern regions that Russia recognises as independent to work in Russia without a work permit and to live in the country “without a time limit”, AP reported.

To be eligible, applicants will have to be fingerprinted, photographed and undergo a test for drugs and any infectious diseases.

In July, the Kremlin made it easier for Ukrainians to receive Russian nationality, a measure denounced by Kyiv.

Slovakia has agreed to have fellow NATO states Czech Republic and Poland police its skies as Bratislava withdraws its Soviet-made MiG-29s from service, potentially freeing up the old jets to send to Ukraine.

Slovakia has announced it is ready to send the 11 MiG fighters to Ukraine, whose military has long relied on Soviet-era equipment and which has appealed for more supplies from NATO nations to boost its ability to battle invading Russian forces.

Slovak defence minister Jaroslav Nad told reporters at an air show on Saturday – where he met defence ministers of the Czech Republic and Poland – that Bratislava remained ready to send the planes to neighbouring Ukraine, but no deal had yet been reached, Reuters reported.

“There is a political will, and it makes sense, to help those who need help,” Nad said, adding, “The possibility is on the table, and once there is an agreement we will inform you.”

Zelensky: Russian ‘invaders will die like dew on sun’

The Ukrainian leader posted a series of photos dedicated to the country’s air force, and said the Russian “invaders will die like dew on the sun”.

Russia fires on cities not far from Zaporizhzhia plant

Russian forces fired missiles and artillery on Ukrainian-held areas across the river from Europe’s largest nuclear power plant, authorities said, as concern persisted about safety at the Russian-controlled plant after it was temporarily knocked offline.

Grad missiles and artillery shells hit the cities of Nikopol and Marhanets, each about 10km (6 miles) and across the Dnieper River from the Zaporizhzhia nuclear power plant, said Valentyn Reznichenko, governor of Ukraine’s Dnipropetrovsk region.

Russian forces occupied the nuclear plant complex early in the war in Ukraine, and Ukrainian workers have kept it running. Each side has repeatedly accused the other of shelling the complex, raising fears that the fighting could trigger a catastrophe.