Russia’s “Special Operation” in Ukraine; Day 175: UN chief to meet with Zelensky and Erdogan in Ukraine 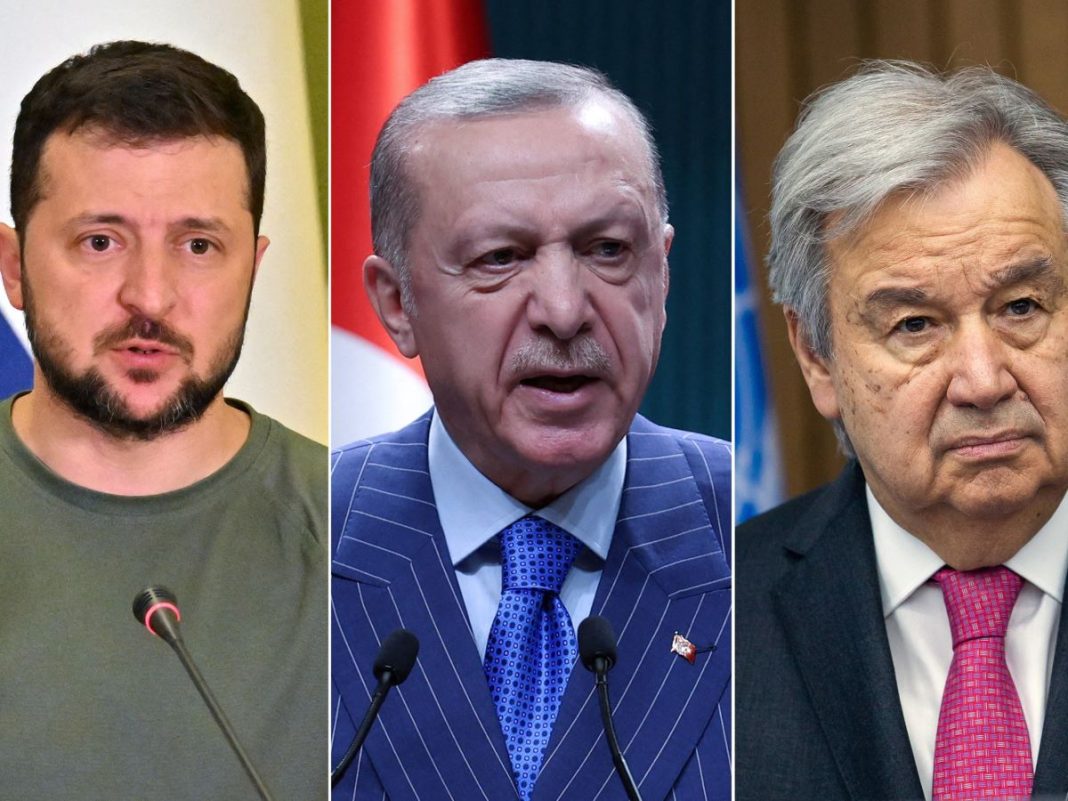 Navalny, who is serving a prison sentence that Putin’s critics say is politically motivated, wants Western governments to sanction thousands of people his organization, the Anti-Corruption Foundation, accuses of wrongdoing.

“We must get the foreign officials to support our list of 6,000 or create their own instead of babbling on endlessly, and actually do what has been loudly and fervently proclaimed since the first day of the war,” Navalny wrote on Twitter.

According to Navalny, only 46 out of the 200 Russian oligarchs from the Forbes list have been sanctioned by the West. Others, despite their close ties to Putin, were spared.

The jailed Kremlin critic also proposed imposing a 20-year travel ban to the UK, the US and the EU for Russian officials and oligarchs who publicly support the war in Ukraine.

Navalny decried the fact that Alexei Miller, the head of Russia’s state-run energy giant Gazprom and purportedly a friend of Putin’s, is not on the European sanctions list.

Navalny also questioned why the US had not sanctioned Roman Abramovich, the former owner of Chelsea football club. Navalny claims Abramovich supplies metal to the Russian defense ministry.

Abramovich was sanctioned by the UK government in March and forced to sell the club, despite repeatedly denying that his business activities merited any punishment.

The Russia-appointed regional leader in Crimea, Sergei Aksyonov, has said detonations at an ammunition depot near Dzhankoi continued into Wednesday.

Aksyonov stated the last explosions were at about 8:15am local (5 GMT) and two fires were still burning, according to the Associated Press news agency.

He added efforts were underway “to get all the machinery off the ground and finish extinguishing fires” by the afternoon.

Russia has announced saboteurs were responsible for a series of explosions at strategic sites on the annexed peninsula.

Russia says it has neutralised ‘terrorist’ cell in Crimea

The top official in Russian-annexed Crimea has said Russia’s Federal Security Service (FSB) had arrested the members of a six-person “terrorist” cell, a day after explosions rocked one of Russia’s military bases there.

“All of them are detained. The activities of the terrorists were coordinated, as one would expect, from the territory of the terrorist state of Ukraine,” Sergei Aksyonov, the official, said on the social messaging app, Telegram.

Aksyonov added the suspects were members of the group Hizb ut-Tahrir, which is banned in Russia.

An FSB statement did not say whether the detained individuals were linked with explosions on Tuesday at a base in Dzhankoi in northern Crimea and last week at a Russian military base in western Crimea. However, it mentioned Dzhankoi, along with the city of Yalta, as the two locations where the alleged cell had been ‘neutralised’.

Russia flew Su-34 fighter jets in Belarussian airspace to launch missiles on the Ukrainian city of Zhytomyr, a major transportation hub that links to the capital Kyiv, the Ukrainian Air Force claimed.

Elsewhere in the northern and eastern regions of the country, fighting raged as Russian forces focused on taking territories still under Ukrainian control. Ukrainian officials reported shelling in multiple cities including Sloviansk and Kramatorsk.

The city of Kharkiv, the country’s second largest, was also targeted.

“In the Bohorodychne district, enemy tried to conduct an offensive battle, was unsuccessful, and withdrew. Fighting continues near Mazanivka and Novodmytrivka,” the military’s General Staff said, noting, “The enemy was conducting aerial reconnaissance in the Kramatorsk area. Near Spirne, the invaders decided to go on the offensive, suffered losses and retreated.”

The General Staff added that Russian forces had also been trying to take control of the Donetsk town of Bakhmut but Ukrainian forces continue to hold it, despite air and missile strikes, and intense shelling.

The first shipment of grain to leave Ukraine under a deal brokered by the UN and Turkey in late July, appears to have ended up in Syria, satellite images from Planet Labs PBC analysed by The Associated Press show.

The arrival of the ship in Syria has raised eye-brows, as Damascus remains closely aligned with Russia and has cut diplomatic ties with Ukraine. Syria had previously received Ukrainian grain taken from Russian-occupied areas in the weake of the February 24 invasion.

The arrival of the cargo ship Razoni in Syria comes after the government in Kyiv praised the ship’s initial departure from the port of Odesa as a sign that Ukraine could safely ship out its barley, corn, sunflower oil and wheat to a hungry world where global food prices have spiked since the invasion began.

But its arrival in Syria’s port of Tartus shows how complicated and murky international trade and shipping can be.

“Every day and every night, we see new reports of explosions in the territory temporarily occupied by the occupiers. I am asking now all our people in Crimea, in other areas, in the south of the country, in the occupied areas of Donbas and Kharkiv region to be very careful. Please do not go near the military facilities of the Russian army and all those places where they store ammunition and equipment, where they keep their headquarters,” Zelensky said in his daily video message.

Zelensky’s remarks follow a series of explosions in Crimea Tuesday and a surge in attacks on Russian ammunition depots and supply lines in occupied parts of southern Ukraine in recent weeks.

“The reasons for the explosions in the occupied territories can be different, very different. Including, I quote the definition of the occupiers themselves as ‘bungling,’ but they all have the same meaning. The destruction of the logistics of the occupiers, their ammunition, military and other equipment, and command posts saves the lives of our people,” he added.

Ukraine has not officially announced it was responsible for last week’s major attack on an airbase in Crimea, which destroyed at least seven military aircraft, nor Tuesday’s explosions that appear to have destroyed a large stock of munitions.

Referring to long queues of traffic seen leaving Crimea for Russia last week, after the air base attack, Zelesnky stated, “The queue these days to leave Crimea for Russia via the bridge proves that the absolute majority of citizens of the terrorist state already understand or at least feel that Crimea is not a place for them. “

Russians are shelling positions up to 800 times daily: Ukrainian official

Valeriy Zaluzhny, the commander-in-chief of Ukraine’s armed forces, has acknowledged that Russian forces “continue to advance” in Donbas but said the “intense” situation is “fully controlled.”

“I have informed my counterpart about the situation at the front line. It is intense but fully controlled,” Zaluzhny stated after talking with Gen. Wayne Donald Eyre, chief of the Defence Staff of Canada.

Zaluzhny added that “the enemy continues to advance along the entire front line. At the same time, the enemy carries out approximately 700-800 [actions of] shelling of our positions every day, using from 40 to 60,000 pieces of ammunition.”

That estimate is in line with many made by Western analysts about the volume of ammunition being used by Russian forces, after a relative lull in early July.

“The enemy’s main efforts are concentrated on pushing our troops back from the Donetsk oblast. The most intense situation is now on the axis of Avdiivka-Pisky-Mariinka,” Zaluzhny continued.

That axis is a stretch of some 25 kilometers (15 miles) west of Donetsk.

Half million tons of grain exported from Ukraine: UN

More than half a million tonnes of grain have been exported from Ukraine across the Black Sea since the beginning of August, the United Nations has announced.

Since Ukraine, Russia, Turkey and the UN agreed to open the Black Sea route at the end of July, 36 passages have been approved, the UN said, adding that 21 ships left Ukraine for the Bosporus Strait and 15 moved through the channel in the direction of the war-torn country.

Ukraine’s nuclear agency Energoatom has reported what it called an “unprecedented” cyberattack on its website, but said its operations had not been disrupted.

“On August 16, 2022, the most powerful cyberattack since the start of the Russian invasion occurred against Energoatom’s website,” the agency said on Telegram. It “was attacked from Russian territory”, it added.

Erdogan, Guterres and Zelensky to meet Thursday in Ukraine

“At the invitation of President Volodymyr Zelensky, the secretary-general will be in Lviv on Thursday to attend a trilateral meeting with President Recep Tayyip Erdogan of Turkey and the Ukrainian leader,” Guterres’s spokesman stated Tuesday.

Guterres will then visit the Ukrainian port city of Odesa on the Black Sea on Friday before heading to Turkey.

Poland’s prime minister on Tuesday said France and Germany were running the European Union like a “de facto oligarchy,” ignoring voices, such as Poland, that had long warned of Russian expansionism.

“Many European leaders let themselves be seduced by Vladimir Putin. They are now in shock,” Mateusz Morawiecki wrote in an op-ed for French daily Le Monde.

“The return of Russian imperialism should come as no surprise to us,” he added.

German troops return to Bosnia amid instability due to Ukraine war

Germany has sent troops to Bosnia and Herzegovina to join the European Union’s peacekeeping mission for the first time in 10 years as concerns mount about instability from the Ukraine war spilling over to the Western Balkans.

On Tuesday, the first German troops to return to the country were greeted in a ceremony at the Sarajevo headquarters of the EUFOR force that marked the start of their mission, a German military spokesman said.

Germany will deploy some 30 troops in total to Bosnia by mid-September, returning to the force that it had left at the end of 2012.

President Volodymyr Zelensky has said he had discussed “Russia’s nuclear terrorism” at the Zaporizhzhia nuclear power plant in southern Ukraine during a call on Tuesday with French President Emmanuel Macron while calling for more sanctions on Moscow.

“Thanked (him) for France’s tangible defense aid … We must increase sanctions on Russia,” he added.