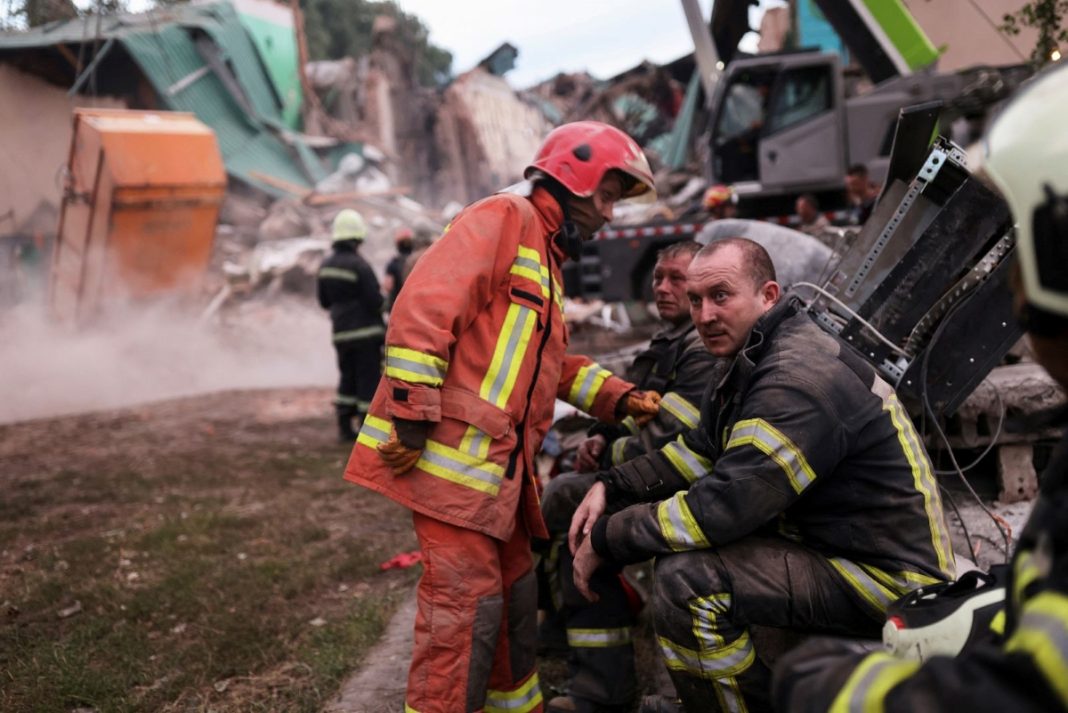 The Ukrainian military says that some of the forces Russia is deploying to bolster its southern flank are coming from the Donbas region.

The spokesperson for Ukraine’s Southern Command, Natalia Humeniuk, explained the south remained a priority for Moscow.

“All in all we understand that they are trying to move their troops and define the directions which will become leading for them in future. As we understand, the South remains one of their priorities,” Humeniuk added.

The country’s intelligence defense unit also announced some of the troops were coming from the Donetsk region.

“Two weeks ago, Russia withdrew tactical groups of airborne troops from Donetsk region and transferred them to occupied Kherson,” it said in a Telegram post on Monday, adding, “Russia is also redeploying troops from its eastern military district that were used in the attack on Sloviansk.”

“I’m grateful to #POTUS and Secretary of Defense Lloyd Austin III and the (US) people for strengthening of #UAarmy,” Oleksii Reznikov tweeted.

HIMARS have a longer range and are more precise than Ukraine’s Soviet-era artillery, allowing Ukrainian forces to hit Russian targets that were previously unreachable.

“The secretary-general hopes that this will be the first of many commercial ships moving in accordance with the Initiative signed, and that this will bring much-needed stability and relief to global food security especially in the most fragile humanitarian contexts,” Stephane Dujarric said in a statement, citing the accord signed last month by Russia and Ukraine to unblock grain exports from the latter.

“Ensuring that existing grain and foodstuffs can move to global markets is a humanitarian imperative,” he added.

The European Union has sent Kyiv one billion euros ($1bn) in financial aid to support its budget and help it tackle the financial consequences of Russia’s invasion, Ukraine’s prime minister says.

“The 1 billion euros is a part of a large package of support for Ukraine … totaling 9 billion euros. The funds will help finance priority budgetary needs,” Denys Shmygal wrote on the Telegram messaging app.

He noted that the first tranche of funds, amounting to 500 million euros, had already been received by Ukraine’s central bank. The remainder was expected to arrive on August 2, Shmygal added.

First Ukraine grain ship to anchor off Istanbul on Tuesday

Turkey’s Defence Minister Hulusi Akar stated the first ship carrying grain to leave Ukraine under a safe passage agreement will anchor off the coast of Istanbul around 12:00 GMT on Tuesday for a joint inspection.

As part of the grain deal, a Joint Coordination Centre was set up in Istanbul with personnel from the United Nations, Russia, Ukraine and Turkey.

Kyiv hails Odesa grain shipment as ‘relief for the world’

Ukraine’s foreign minister has hailed the departure of the first shipment of grain from Odesa’s port since the start of Russia’s invasion in late February as a “relief for the world”.

“The day of relief for the world, especially for our friends in the Middle East, Asia, and Africa, as the first Ukrainian grain leaves Odesa after months of Russian blockade. Ukraine has always been a reliable partner and will remain one should Russia respect its part of the deal,” Dmytro Kuleba tweeted.

Ukraine is a major supplier of grain for the global market, but fighting in the country has prevented the foodstuff from safely leaving the country’s ports since Moscow launched its offensive.

Russia claims it has destroyed HIMARS, Harpoon systems in Ukraine

Russia’s defence ministry announced its forces have destroyed two United States-made HIMARS rocket systems in Ukraine’s northeastern Kharkiv region, and a launch system for Harpoon anti-ship missiles in the southwestern Odesa region, according to a report by the country’s Interfax news agency.

There was no immediate comment from Ukraine on the Russian defence ministry’s latest claim.

Kyiv has hailed the HIMARS systems as a possible game changer for the course of the war. The advanced weapons are more precise and offer a longer range than other artillery systems, allowing Ukraine’s forces to strike Russian targets and weapons depots further behind the front lines.

The Kremlin has welcomed news of the first shipment of grain from Odesa as “very positive” news.

“As for the departure of the first ship, this is very positive. A good opportunity to test the effectiveness of the mechanisms that were agreed during talks in Istanbul,” Kremlin spokesman Dmitry Peskov told reporters, citing the deal reached by Russia and Ukraine last month on resuming exports from the latter’s Black Sea ports.

“Let’s hope that all the agreements will be implemented from all sides, and that the mechanism will work effectively,” he continued.

Turkey’s defence ministry says the first ship carrying Ukrainian grain has set off from the port of Odesa.

The Sierra Leone-flagged cargo ship, Razoni left the port of Odesa for Lebanon, the ministry said. A statement from the United Nations said the Razoni is carrying over 26,000 tons of maize.

Data from the Razoni’s Automatic Identification System, a safety tracker for ships at sea, showed the vessel slowly coming out from its berth at Odesa port Monday morning alongside a tug boat.

The ship is expected to reach Istanbul on Tuesday, where it will be inspected, before being allowed to proceed, the ministry added.

Authorities say at least six people were wounded after a small explosive device carried by a makeshift drone blew up at the headquarters of Russia’s Black Sea Fleet on the Crimean Peninsula.

There was no immediate claim of responsibility for the drone explosion in a courtyard at the naval headquarters in the city of Sevastopol. But the seemingly improvised, small-scale nature of the attack raised the possibility that it was the work of Ukrainian fighters trying to drive out Russian forces.

A Russian lawmaker from Crimea, Olga Kovitidi, told the Russian state news agency RIA-Novosti that the drone was launched from Sevastopol. She stated the incident was being treated as a terrorist act, the news agency said.

The United Kingdom says foreign companies holding UK property must identify their true owners in an official register as part of a crackdown on Russian oligarchs and corrupt elites laundering illicit wealth.

The “Register of Overseas Entities”, which became active on Monday, is part of a wider economic crime law enacted this year in an effort to stop the flow of illicit Russian cash into London following Moscow’s invasion of Ukraine.

“To ensure we are free of corrupt elites with suspicious wealth, we need to know who owns what,” junior business minister Martin Callanan stated, adding, “We are lifting the curtain and cracking down on those criminals attempting to hide their illicitly obtained wealth.”

The International Committee of the Red Cross (ICRC) says it is still waiting to access prisoners of war (POWs) who were injured in an attack on a prison camp in Olenivka, in the separatist-held region of Donetsk, eastern Ukraine.

“To be clear, our request to access the POWs from Olenivka yesterday has not been granted,” the ICRC delegation in Ukraine wrote on Twitter.

“Granting ICRC access to POWs is an obligation of parties to conflict under the Geneva Conventions,” it added.

But the Russian Defence Ministry has announced that Moscow has invited the ICRC to visit.

The ICRC, which is strictly neutral, is authorised to visit prisoners of war under international law. However, formally, delegates first need the consent of the party holding the POWs before they can visit.

The Turkish presidential spokesman has said he is hopeful that the grain export deal signed between Turkey, the United Nations, Russia, and Ukraine can pave the way for peace talks.

“I don’t want to sound overly optimistic, but it’s not unlikely that this grain supply deal will open the door to a ceasefire, prisoner swap, and fresh peace negotiations if it is implemented well,” Ibrahim Kalin stated in a televised interview.

Kalin added that a war in which both sides suffer defeat and the entire globe suffers harm would have no winner, pointing out how the war impacts every aspect of life worldwide, ranging from the cost of energy to commodity and food prices.

He also noted that ships from the ports of Odesa are loaded and ready to go, but inspections, coordinated corridors, and delivery of the shipments are still being arranged.

Kalin stressed that if everything goes well the ships may depart in two days at the latest.