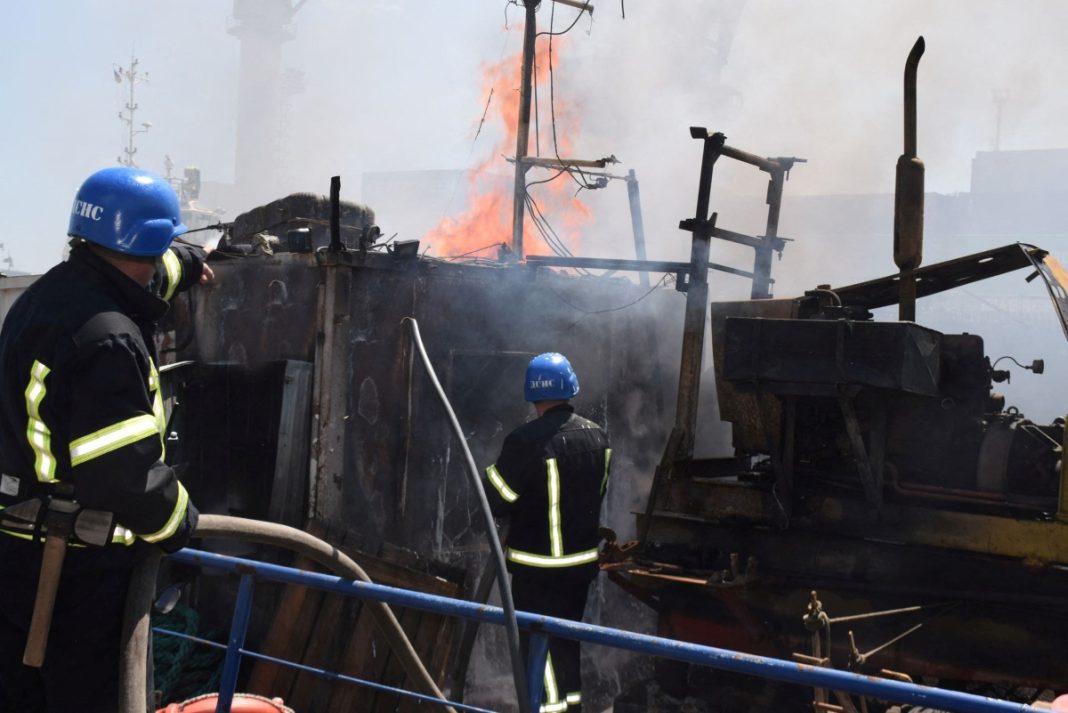 Russia’s top diplomat Sergei Lavrov has offered reassurances over Russian grain supplies to Egypt during his visit to Cairo.

“We reaffirmed the commitment of Russian grain exporters to meet all their commitments,” Lavrov said in a press conference with Egyptian counterpart Sameh Shoukry.

“We discussed specific parameters of cooperation in this area, agreed on further contacts between the relevant ministries, and we have a common understanding of the causes of the grain crisis,” he added.

Ukraine’s Kherson to be ‘liberated’ from Russia by September: Official

A Ukrainian official has said that the country’s southern region of Kherson, which fell to Russian troops early in their February invasion, would be recaptured by Kyiv’s forces by September.

“We can say that the Kherson region will definitely be liberated by September, and all the occupiers’ plans will fail,” Serhiy Khlan, an aide to the head of the Kherson region, stated in an interview with Ukrainian television.

The Ukrainian army, emboldened by deliveries of Western-supplied long-range artillery have been clawing back territory in the southern Kherson region in recent weeks.

“We can say that a turning point has occurred on the battlefield. We see that the Armed Forces of Ukraine are prevailing in their most recent military operations,” Khlan added.

Moscow is not asking for the lifting of sanctions, but, in order to resolve the existing issues with global food supplies, the West must take steps to eliminate obstacles that it had created itself, Russian Foreign Minister Sergei Lavrov has stated following a meeting with his counterpart from Egypt.

“We will simply be developing our own economy now, relying on reliable partners, and not on those who once again have proven their complete inability to negotiate,” Lavrov commented on Moscow’s unwillingness to fight for western sanctions’ relief.

At the same time, the minister expressed hope that the UN will succeed in lifting sanctions against Russia, which are hindering the export of Russian grain.

“The UN Secretary General volunteered to seek the removal of those illegitimate sanctions that were introduced and which prevented shipment operations involving Russian grain, including insurance, foreign port access for our ships and the access of foreign ships to Russian ports, after the signing of the agreements in Istanbul,” Lavrov added.

He recalled that the UN secretary general stood by the idea of eliminating obstacles to Ukrainian and Russian grain exports by means of one package deal – something that Russia itself insisted on.

The minister noted, however, that the Western countries had tried to delay the resolution of the Russian grain exports issue for an indefinite period of time even though Russia’s grain stock is far greater than that of Ukraine.

The Russian Navy’s strike on the port in Odessa destroyed a docked Ukrainian warship, as well as a warehouse where naval Harpoon missiles, supplied by the US, were stored, the Russian Defense Ministry has stated.

The ministry added that ship-based long-range precision missiles were used to strike these targets.

In addition to destroying the unspecified military vessel and the warehouse, the Russian strike destroyed a plant located at the port, which Ukraine used to modify and repair its warships, the Russian Defense Ministry said.

While the Defense Ministry did not elaborate on the type of warship that had been destroyed by the strike, Russian Foreign Ministry spokeswoman Maria Zakharova specified that it was a fast attack craft.

Ukraine could export 60 million tonnes of grain in eight to nine months if its ports were not blockaded, but Russia’s strike on the port of Odesa showed it will definitely not be that easy, an economic adviser to the Ukrainian president said.

Ukraine could earn $10bn by exporting 20 million tonnes of grain in silos in addition to 40 million tonnes from its new harvest, economic adviser Oleh Ustenko stated on television.

The harvest totals 60 million tonnes, of which 20 million are for domestic consumption, he explained.

“But with the way they are opening now and what Russia is doing in the Black Sea, yesterday’s strike shows that it definitely won’t work that way,” he continued.

War will not break Ukraine” Zelensky

As Russia’s war on Ukraine reaches its five-month mark, President Volodymyr Zelenskyy has said he is confident his country will prevail.

“This war has not broken Ukraine and will not break it,” Zelensky stated on Telegram.

“We will not give up. We will protect what is ours. We will win!” he continued, adding that life went on in his country despite the fighting.

Zelensky repeated his call for the US and other NATO member states to supply heavy weapons to halt the Russian advance and free territories occupied during the war.

“Kalibr missiles destroyed military infrastructure in the port of Odessa, with a high-precision strike,” Zakharova stated on Telegram in response to President Volodymyr Zelensky, who noted dialogue with Moscow was becoming increasingly untenable after the attack.

The Bahamas, which imposed a ban on transactions with the Bank of Russia, the country’s financial ministry and a number of credit institutions, was also included in the list, it added.

Ukrainians asked to be silent on Kyiv’s progress in Kherson: ISW

Kherson residents have been called on to remain silent about the progress of Ukraine’s counteroffensive in the region until Ukrainian authorities release official statements, the Institute for the Study of War (ISW) has noted.

“Ukrainian forces are likely preparing to launch or have launched a counteroffensive in Kherson Oblast as of July 23, but open-source visibility on the progress and tempo of the counteroffensive will likely be limited and lag behind events,” the ISW said in its latest campaign assessment.

The institute added that the Ukrainian adviser for the Kherson region’s administration, Serhiy Khlan, stated on Saturday that Ukrainian forces had seized unspecified settlements in the region, but called on Ukrainian civilians to remain silent on the advance of Ukraine’s troops.

The ISW said it would “report on the progress of any Ukrainian counteroffensives to the best of its ability within these constraints”.

Russia’s claim it has expanded war aims beyond the Donbas ‘not true’: UK

The United Kingdom says Russia’s claim it has expanded its war aims beyond the Donbas region is “almost certainly not true”.

The UK’s defence ministry noted Russian Foreign Minister Sergey Lavrov’s recent comments in which he said Russia had expanded the scope of its “special military operation” beyond Ukraine’s Donbas region to include areas such as the Kherson and Zaporizhia regions.

“There is a realistic possibility that Lavrov made the comments to pave the way for referenda to take place in occupied territories beyond Luhansk and Donetsk,” it added.

Canadian and Swede among foreign fighters killed in Donbas

A Canadian and Swedish man were killed alongside two Americans while fighting in Ukraine’s eastern Donbas region, POLITICO has reported.

The four foreign fighters were killed on July 18 when a Russian tank opened fire during a battle at the frontline in the Donetsk region, POLITICO cited their commander as saying.

Ruslan Miroshnichenko told POLITICO that the men were part of a special operations force in the Territorial Defence of the Armed Forces of Ukraine. Their unit has been based near Siversk, but they had been deployed to the village of Hryhorivka to try to slow Russia’s advance.

The US Department of State confirmed the deaths of the two Americans on Saturday but announced that it would offer no more information out of respect for their families. POLITICO reported the names of the men as given by Miroshnichenko.

Odesa attacks have destroyed possibility of agreements with Moscow: Zelensky

President Volodymyr Zelensky has said Russia’s attacks on Odesa after a deal was reached to transport grain from there have destroyed the possibility any agreements with Moscow.

“Today’s Russian missile attack on Odesa, on our port, is a cynical one, and it was also a blow to the political positions of Russia itself. If anyone in the world could still say that some kind of dialogue with it, with Russia, some kind of agreements are needed, see what is happening,” Zelensky noted in his nightly address.

“Today’s Russian Kalibr missiles have destroyed the very possibility for such statements,” he continued.

He also stated the Odesa Art Museum had been damaged by the attack.

“This apparent Russian barbarism brings us even closer to obtaining the very weapons we need for our victory,” Zelensky added.

EU looks to replace gas from Russia with Nigerian supplies

The European Union is seeking additional gas supplies from Nigeria as the bloc prepares for potential Russian supply cuts, the deputy director general of the European Commission’s energy department has said.

Matthew Baldwin was speaking in Nigeria where he held meetings with officials from Africa’s largest oil producer this week. He was told that Nigeria was improving security in the Niger Delta and planned to reopen the Trans Niger pipeline after August, which would yield more gas exports to Europe.

Oil and gas output in Nigeria is being throttled by theft and vandalism of pipelines, leaving gas producer Nigeria LNG Ltd’s terminal at Bonny Island operating at 60 percent capacity.

The EU imports 14 percent of its total LNG supplies from Nigeria and there is potential to more than double this, Baldwin told Reuters by phone.

“If we can get up to beyond 80 percent, at that point, there might be additional LNG that could be available for spot cargoes to come to Europe,” Baldwin stated.

A senior US congressional delegation met with Volodymyr Zelensky in Kyiv on Saturday and promised to try to ensure continued support in the war against Russia.

The delegation — which included Representative Adam Smith, chair of the House Armed Services Committee — is the latest in a series of high-profile American visitors to Ukraine.

“The United States, along with allies and partners around the world, have stood with Ukraine by providing economic, military, and humanitarian assistance,” the delegation said in a statement.

“We will continue to seek ways to support President Zelenskyy and the Ukrainian people as effectively as possible as they continue their brave stand,” they added.

Orban has condemned Russia’s invasion of Ukraine in February, but maintains an ambiguous position on the conflict.

“We’re sitting in a car with four flat tyres,” he said.

“A new strategy is needed, which should focus on peace negotiations instead of trying to win the war,” Orban added.

Antony Blinken has stated that Washington strongly condemns the Russian missile attack on Saturday against Odesa and that Moscow bears responsibility for deepening the world’s food crisis.

The attack “undermines work of the UN, Turkey and Ukraine to get critical food to world markets” Blinken said in a statement.

In a tweet, Blinken also added the attacks undermined “the credibility of Russia’s commitments” to the joint deal.

Ukrainian forces are gradually moving into the eastern Kherson region, which was taken by Russia at the start of the war, President Volodymyr Zelensky has said.

“The occupiers have been trying to establish a foothold there … but how did it help them? The Ukrainian armed forces are moving into the region step by step,” he stated in his nightly address.

Kyiv is preparing for a major counter-offensive in Kherson.