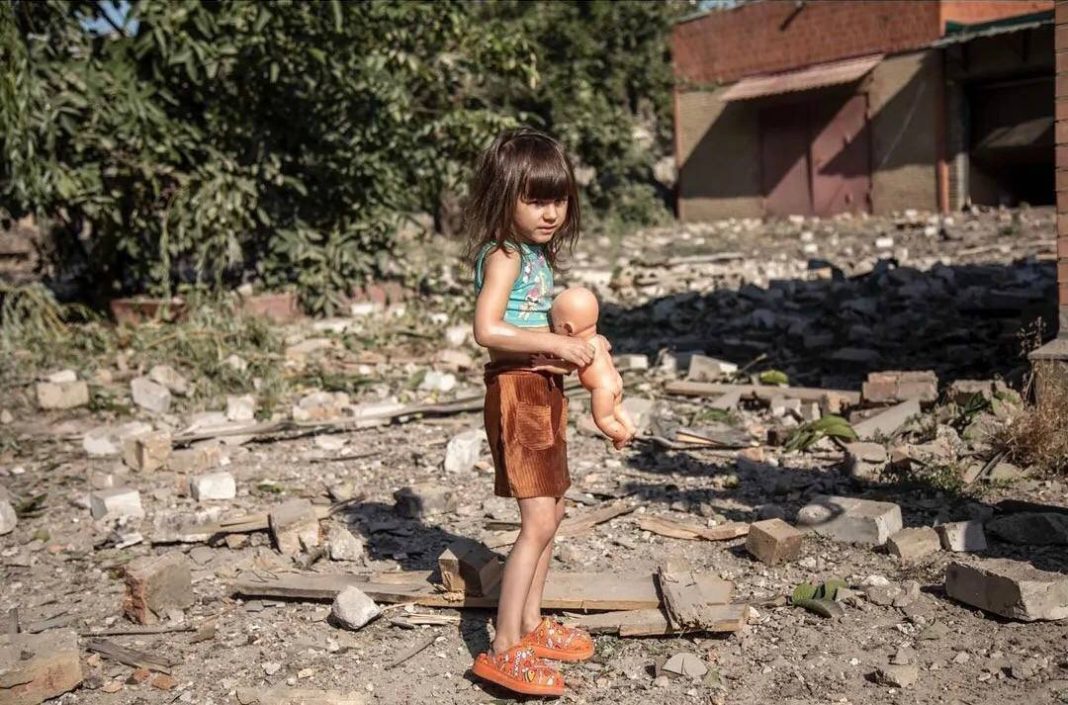 “It’s an issue of life and death for many human beings. And the question is that Russia has to de-block and allow Ukrainian grain to be exported,” Borrell told reporters.

“We are not going to stop supporting Ukraine and putting sanctions on Russia,” he said, adding, “Certainly there is a risk to our energy supply. Everybody knows (that).”

He noted that the EU Commission and Council were prepared to face “any possible situation.”

EU foreign ministers are expected to meet in Brussels on Monday to hold sanctions discussions, according to a senior EU official.

Ukraine’s army killed 150 Russian military personnel in the past day, the general staff of Ukraine’s armed forces said on Monday.

This brings the total number of Russian personnel lost, since the beginning of the invasion on February 24, to 38,450, the general staff added.

NATO’s multiple rocket launcher (MRL) experts appear to be directing the actions of Ukrainian troops “on the ground,” which is fraught with certain consequences, Russian Foreign Minister Sergey Lavrov stated.

“NATO instructors and MRL gunners are already, apparently, directing the actions of the Armed Forces of Ukraine and the national battalions ‘on the ground’,” Lavrov said in his article for the Izvestia newspaper, adding that he hoped that “there are responsible politicians among the Europeans who are aware of the consequences this is fraught with.”

He noted that the armed forces of Russia, as well as the Donetsk and Luhansk People’s Republics (DPR and LPR), are confidently solving tasks within the framework of Moscow’s special military operation in Ukraine.

“Losing on the battlefield, the Ukrainian regime and its Western patrons do not disdain to stage bloody dramatizations in order to demonize our country in international public view,” the Russian foreign minister continued.

According to the Russian foreign minister, Europe is suffering from sanctions imposed against Russia the most, and is using up its arsenals, supplying weapons to Kiev without requiring an account of who controls the arms and where these weapons end up.

In its latest intelligence briefing, the ministry stated Russia was using Wagner “to reinforce front-line forces and to mitigate manning shortfalls and casualties.”

It added that this was potentially impacting Russian military effectiveness.

FM: China not a party to Ukrainian crisis, but will not sit idly by

China’s Foreign Minister Wang Yi reportedly said during a phone call with his Hungarian counterpart Peter Szijjártó Beijing is not a party to Ukrainian crisis, but will not sit idly by.

Yi and Szijjarto talked over the phone on Sunday about bilateral ties between the countries and the Ukraine crisis, according to a report by China’s Xinhua news agency.

“China is not a party to the Ukrainian crisis, but we are not going to be an indifferent spectator and, moreover, we are not going to add fuel to the fire, we have always been adamant and consistent in encouraging peace and negotiations,” the Chinese diplomat said.

The lessons from the Ukraine crisis are “profound and worth well learning for all sides”, Wang noted, adding that in the long run, the parties should discuss building a balanced, effective, and sustainable European security framework, so as to realise lasting peace and security.

Russian police detained the journalist Marina Ovsyannikova, who in March interrupted a live television broadcast to denounce the military action in Ukraine, her lawyer stated.

No official statement has been made, but her entourage posted a message on the journalist’s Telegram account on Sunday, according to Agence France-Presse.

“Marina has been detained. There is no information on where she is,” it read.

The message included three photos of her being led by two police officers to a white van, after apparently having been stopped while cycling.

Ovsyannikova also posted images of herself and two dogs on her Facebook page, later revealing she had been released.

“Went for a walk with the dogs, just stepped outside the gate, people in uniform approached me. Now I’m sitting in Krasnoselsky ministry of internal affairs,” she stated.

Three hours later, Ovsyannikova said she had been released.

“I’m home. Everything is okay,” she wrote, adding, “But now I know it’s always best to bring a suitcase and passport if you go out.”

European Commission President Ursula von der Leyen will travel to Baku on Monday to seek more natural gas from Azerbaijan, the EU’s executive announced, as the European Union seeks to reduce its reliance on Russian energy.

“Amid Russia’s continued weaponisation of its energy supplies, diversification of our energy imports is a priority for the EU,” the Commission wrote on Twitter, adding, “President von der Leyen and (Energy) Commissioner Kadri Simson will be tomorrow in Azerbaijan to further strengthen the cooperation.”

According to a draft document seen by the Reuters news agency on July 14, the Commission has proposed to EU countries a deal with Azerbaijan to increase imports of natural gas and support the expansion of a pipeline to do this.

Emmanuel Macron’s proposed community would be a framework for European Union members and democratic European non-members to discuss shared interests. Its overriding goal would be “stabilising the European continent”, France24 reported Macron having said in June. This community would encompass EU membership candidates like Ukraine and possibly ex-member the United Kingdom.

But TASS reports that Lavrov told Izvestia newspaper there would be “no particular financial or economic benefits, but there will be demands for full solidarity with the EU on its anti-Russian actions”.

“This is no longer an ‘or-or’ principle, but a ‘who is not with is against us’ principle,” TASS quoted Lavrov as having said.

“Macron himself explained what this community is: the EU will invite all European countries to join, from Iceland to Ukraine, but not Russia. I will point it out right here that we don’t need to go there, but the statement itself, which unveils the nature of this deliberately confrontational, dividing idea, is noteworthy,” he added.

Zelenskyy has followed up on decrees in which he removed the State Security Service head and his Prosecutor General by saying more than 60 of their employees were working against Ukraine in Russian-occupied territory.

He stated 651 criminal proceedings had been registered relating to high treason and collaboration by employees of prosecutor’s offices, pretrial investigation bodies and other law enforcement agencies.

“In particular, more than 60 employees of the prosecutor’s office and the Security Service of Ukraine remained in the occupied territory and are working against our state,” he added.

He said that such crimes raised “very serious questions” for the relevant leaders and added, “Each of these questions will receive a proper answer.”

If bridge linking Crimea and Russia is hit, ‘consequences will be obvious’: Medvedev

Dmitry Medvedev, the deputy head of Russia’s Security Council chaired by Vladimir Putin, has responded to Ukrainian officials’ statements that Kyiv may strike the bridge linking Crimea and Russia, warning that that would trigger devastating consequences for the Ukrainian leadership.

“If that happens, the consequences will be obvious: They will momentarily face Doomsday,” Medvedev said, adding, “It would be very hard for them to hide.”

Medvedev, who once was touted by the West as more liberal compared to Putin, noted Russia will press its action in Ukraine until fulfilling its stated goal of “denazifying” and “demilitarising” the country.

He predicted that the continuing fighting will “undoubtedly lead to the collapse of the existing regime” in Kyiv.

The orders dismissing domestic security chief Ivan Bakanov, a childhood friend of Zelensky, and Prosecutor General Iryna Venediktova, who leads the effort to prosecute Russian war crimes in Ukraine, were published on the president’s official website.

No reason was immediately given for the sackings.