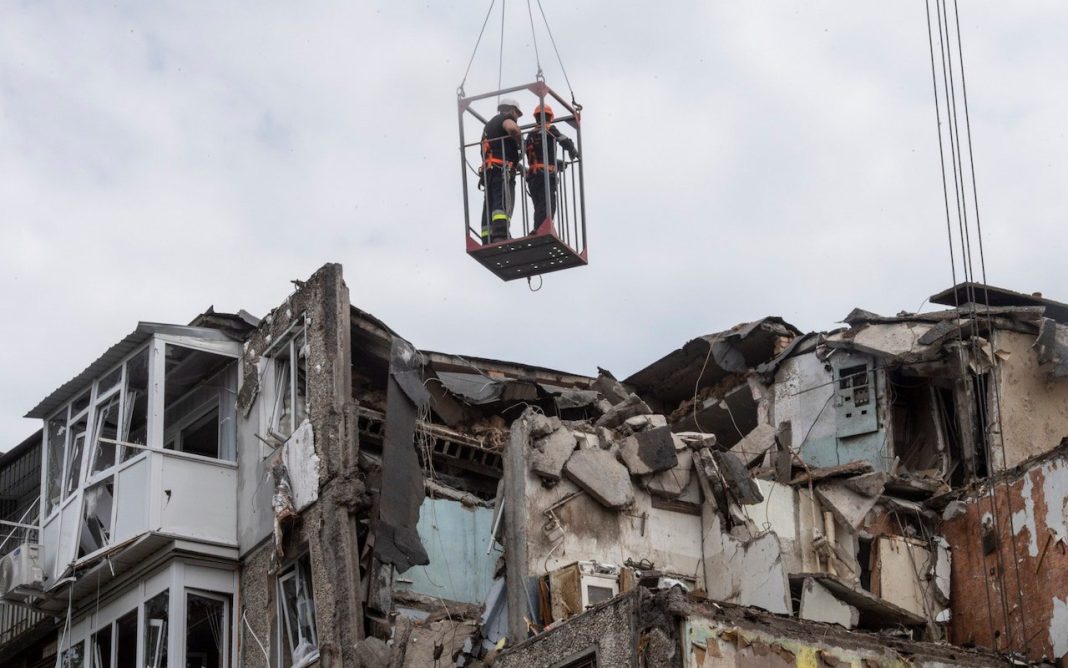 The Ukrainian army on Saturday rejected claims that Moscow-backed separatists and Russian forces had surrounded the key eastern city of Lysychansk, but said heavy fighting was ongoing on its edges.

“Fighting rages around Lysychansk. (But) luckily the city has not been encircled and is under control of the Ukrainian army,” Ruslan Muzytchuk, a spokesman for the Ukrainian National Guard, stated on Ukrainian television, after a separatist spokesman made the allegations earlier in the day.

Capturing the city would allow the Russians to push deeper into the wider eastern region of the Donbas, which has become the focus of their offensive since failing to capture Kyiv after launching their military operation in Ukraine in late February.

Across the Donets river from Lysychansk, the Russians seized the neighbouring city Severodonetsk last week.

Andrei Marotchko, a spokesman for the separatist forces, earlier told the TASS news agency: “Today the Lugansk popular militia and Russian forces occupied the last strategic heights, which allows us to confirm that Lysychansk is completely encircled.”

Britain’s Prime Minister, Boris Johnson, warned against what he called “Ukraine fatigue” setting in around the world after visiting Kyiv.

“When Ukraine fatigue is setting in, it is very important to show that we are with them for the long haul and we are giving them the strategic resilience that they need.”

The UK has condemned the exploitation of prisoners of war after two more British men held by Russian proxies in east Ukraine and charged with “mercenary activities” could face the death penalty.

Andrew Hill, from Plymouth, and Dylan Healy of Huntingdon were reported to have been charged with “forcible seizure of power” and undergoing “terrorist” training, according to a state news agency in Russian-controlled Donetsk.

“We condemn the exploitation of prisoners of war and civilians for political purposes and have raised this with Russia,” said a statement released by the British Foreign Office.

“We are in constant contact with the government of Ukraine on their cases and are fully supportive of Ukraine in its efforts to get them released,” it added.

Two more Britons and a Moroccan man were sentenced to death on identical charges by the authorities in Russian-controlled Donetsk.

Ukrainian separatists backed by Russia have claimed they had “completely” encircled the key city of Lysychansk in the eastern Luhansk region.

“Today the Lugansk popular militia and Russian forces occupied the last strategic heights, which allows us to confirm that Lysychansk is completely encircled,” Andrei Marotchko, a spokesman for the separatist forces, told the TASS news agency.

Capturing the city would allow the Russians to push deeper into the wider eastern region of the Donbas, which has become the focus of their offensive since failing to capture Kyiv after launching their military operation in Ukraine in late February.

Across the Donets River, the Russians captured the neighbouring city Severodonetsk last week.

“The enemy is facing significant losses on all fronts. Three battalions from the Tenth Mountain Assault Brigade and the 72nd Mechanized Brigade [of the Ukrainian Armed Forces] lost more than half of their personnel near the Verkhnekamenka and Zolotarevka settlements in just one day,” he noted.

The Russian Armed Forces have destroyed 227 aircraft and 1,430 drones since the start of a special military operation in Ukraine, Konashenkov noted.

Ukraine claims over 35,800 Russian troops killed since start of war

More than 35,800 Russian soldiers have so far been killed during the war in Ukraine, the Ukrainian Armed Forces announced on Saturday.

These are the indicative estimates of Russia’s combat losses as of July 2, according to the Armed Forces of Ukraine. pic.twitter.com/qsmbuNQ4wg

The chief of the General Staff of the Russian Armed Forces, Valery Gerasimov, has inspected divisions of Russian troops involved in Moscow’s “special military operation” in Ukraine, the defence ministry announced.

It was not immediately clear when the visit took place or if Gerasimov had visited Ukraine itself.

Two more Britons in Ukraine charged with being mercenaries by Russia

Russian state media has reported two British men have been captured by Moscow’s forces in separatist-held Ukraine and charged with being mercenaries.

Cambridgeshire aid worker Dylan Healy, 22, and military volunteer Andrew Hill have been charged with carrying out “mercenary activities”, officials in the Moscow-backed Donetsk People’s Republic stated, according to TASS.

The outlet reported both men were refusing to co-operate with investigators.

A pro-Kremlin website said Healy and Hill would face the same mercenary charges as Aiden Aslin and Shaun Pinner, two British military volunteers captured in Mariupol who have been condemned to death in Donetsk.

Powerful explosions have rocked the Ukrainian city of Mykolaiv, the mayor said, a day after authorities said at least 21 people were killed when Russian missiles struck an apartment building near the Black Sea port of Odesa.

Air raid sirens sounded across the Mykolaiv region, which borders the vital exporting port of Odesa, before the blasts.

“There are powerful explosions in the city! Stay in shelters!” Mykolaiv mayor Oleksandr Senkevich wrote on the Telegram messaging app.

It was not immediately known what caused the explosions.

Explosions flattened part of an apartment building while residents slept on Friday, the latest in a series of what Ukraine says are Russian missile attacks aimed at civilians.

The US is providing more ammunition for the High Mobility Artillery Rocket Systems (HIMARS) advanced rocket system in the latest $820 million aid package to Ukraine, the Pentagon announced Friday.

The Pentagon did not say how many rounds of ammunition would be provided for the High Mobility Artillery Rocket System, capable of launching a barrage of guided rockets approximately 40 miles (about 64 kilometers), but Ukraine has made the request for more systems and more ammo one of its top priorities.

The HIMARS ammunition will be part of the 14th presidential drawdown authority (PDA), meaning it will come directly from existing US inventories. This PDA totals $50 million.

So far, the US has committed to sending in eight HIMARS systems. At least four of HIMARS have already entered the fight against Russia. The Joe Biden administration had faced criticism for not sending enough ammunition for the HIMARS.

The remaining $770 million falls under the Ukraine Security Assistance Initiative (USAI) where the US will contract directly with arms manufacturers to make weapons for Ukraine. This includes two advanced anti-aircraft and aerial defense systems, called the National Advanced Surface-to-Air Missile Systems (NASAMS). It also includes 150,000 rounds of 155mm artillery ammunition for the howitzers the US has already sent, as well as four counter-artillery radars.

The US has now committed $6.9 billion of equipment and aid to Ukraine since Russia’s invasion began on Feb. 24 and a total of $7.6 billion since the start of the Biden administration.

The Ukrainian army has accused Russia of carrying out attacks using incendiary phosphorus munitions on Snake Island, just a day after withdrawing its forces from there.

The European Union is working on new sanctions to include Russian gold, people familiar with the matter told Bloomberg on Friday. According to the report, the EU is looking to limit Moscow’s revenue sources.

Preparations for the new sanctions package are ongoing and some nations will be pushing to add more measures to the proposals before they are presented to member states for approval, one of the people in the report said.

The report comes after the US prohibited the imports of Russian gold on Tuesday, with the UK, Japan, and Canada joining the ban.

Industry analysts describe the ban on Russian gold as mostly symbolic because Western sanctions have largely closed off European and US markets to gold from the world’s second-biggest bullion miner. Experts add that Russia still has the option to sell the precious metal directly to refineries, or to buyers in China, India, and the Middle East.

Russia’s gold exports were estimated to be worth $15 billion in 2021, according to Bloomberg.

Ukrainian President Volodymyr Zelensky has described a Russian missile attack on a residential building in the southern Ukrainian region of Odesa as not accidental.

This was a targeted missile attack by Russia, terror by Russia against Ukrainian towns and villages, against the Ukrainian people, adults and children, Zelensky said after a meeting with Norwegian Prime Minister Gahr Store in Kyiv, according to the Interfax-Ukraine news agency.

Ukraine’s Foreign Minister Dmytro Kuleba condemned Russia for the deadly missile strikes on a residential area of the Odesa region in southern Ukraine that left at least 20 dead and 38 injured early on Friday morning.

In a short statement on Twitter, he called for modern missile defense systems to be sent to Ukraine.

“Terrorist state Russia continues its war against civilians with overnight missile strikes on Odesa region killing dozens, including children. I urge partners to provide Ukraine with modern missile defense systems as soon as possible. Help us save lives and put an end to this war,” Kuleba said.

EU prepares emergency plan to do without Russian energy

The European Union’s executive arm has pledged to draft an emergency plan this month aimed at helping member countries do without Russian energy amid the war in Ukraine.

European Commission President Ursula von der Leyen stated the initiative would build on EU moves to ditch Russian coal, oil and natural gas and would complement a bloc-wide push to accelerate the development of renewable energy such as wind and solar power.

“We are preparing emergency plans for Europe,” von der Leyen said in the Czech town of Litomysl, where she marked the start of the country’s six-month stint as holder of the rotating EU presidency.

“Energy prices are high. People, rightly so, expect us to do something about it,” she added.

Finland says war in Europe beyond Ukraine is a possibility

Finland’s foreign minister, Pekka Haavisto, has said war in Europe beyond Ukraine is “of course” a possibility and urged more countries to support Kyiv.

In an interview with CNN, Haavisto was asked if Ukraine can win the war against Russia.

He replied: “They can maintain the situation and in that sense, they can win this battle. I think they are of course morally on the high ground. They are very united.”