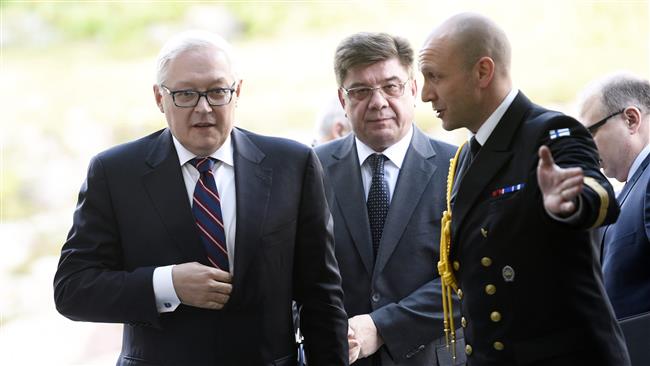 A Russian deputy foreign minister says the international nuclear deal with Iran is working “quite efficiently” and requires no amendment, dismissing calls by the United States to address “flaws” in the deal.

Sergei Ryabkov told Russian news agency TASS that there was an American saying that goes “If it’s not broke, don’t fix it.”

“That’s what I would like to address to the colleagues in the United States,” the Russian diplomat said.

The approach of calls for fixing the Iran deal “seems to be a wrong way to follow as the existing documents are working quite efficiently,” he said of the deal, the Joint Comprehensive Plan of Action (JCPOA).

Iran is fully compliant with the deal, while the US is not, Ryabkov said. “What is to be improved in this context is the implementation of the existing agreements by the US side,” he added.

He also noted that by fully upholding their end of the bargain, the Iranians “have passed the ball to the US side.”

The parties to the JCPOA are Iran, Russia, the US, China, France, the United Kingdom, and Germany. They struck the deal in July 2015 and then took it to the United Nations Security Council, where it was unanimously endorsed in a resolution and effectively became international law.

But the administration of US President Donald Trump, which took office a year after the deal had begun being implemented, has been crying foul. In a speech on Friday, Trump said he was “directing my administration to work closely with Congress and our allies to address the deal’s many serious flaws.”

Trump and other US officials had also in the past talked of amending certain aspects of the deal, which would technically require reopening negotiations. Iran has been clear that renegotiating is not an option.

Separately, French President Emmanuel Macron said on Sunday that he was opposed to a “tougher” approach toward Iran.

Speaking to TF1 and LCI in his first live TV interview since taking office, the French president said he had told Trump not to scrap the Iran deal.

The US president had threatened on a number of occasions while campaigning for office that he would “rip up” the JCPOA.

Macron said Trump “wants to get tougher with Iran. I told him I thought this was the wrong approach because we have to look where we are now with [North] Korea.”

The French leader said he had criticized the US president’s Iran policy as a “bad method.”

He also threw his weight behind Iran’s nuclear accord and spoke of imminent plans to visit the country.

But in further remarks, he said, “What I told him (Trump) was not to tear up the deal. After that I told him, ‘Let’s have a demanding dialog, let’s continue to conduct checks, but let’s be much more demanding with Iran on its ballistic [missile] activity.’”

The Trump administration has long railed against Iran’s missile activities and regional behavior.

In his Friday speech, Trump said those issues have to be addressed. He also said he was not certifying Iranian compliance with the deal, as required under domestic US law.