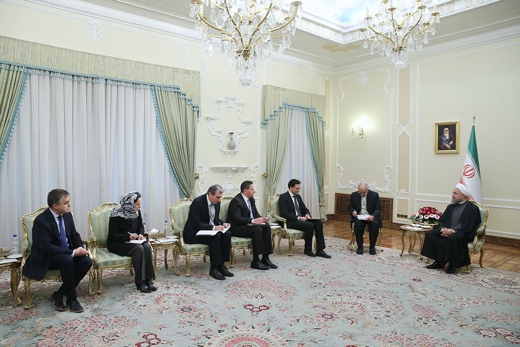 In a meeting with the visiting Bulgarian foreign minister, president Rouhani said conditions for development of ties between Iran and the EU, especially Bulgaria, are ready.

President Hassan Rouhani says a recent resolution of the Board of Governors of IAEA shows that Iran’s nuclear program has always been peaceful and that Tehran is committed to its international obligations.

President Rouhani made the remarks in a meeting with visiting Bulgarian Foreign Minister Daniel Mitov and added that conditions for development of ties between Iran and the European Union, especially Bulgaria, are ready.

Iran’s rich energy resources, its population of 80 million, its important position in the region and appropriate economic conditions after the removal of sanctions would set the stage for development of relations with Sofia, the president said.

Rouhani said Bulgaria as a friendly country and as a gateway to EU could be an important connection route for Iran and countries of the region for European Union.

“Moreover, Bulgaria and EU can be connected to Oman Sea and Indian Ocean through Iran,” he added.

Referring to the sensitivity of regional developments, especially Syria, President Rouhani said that current situation in the region is worrisome and that all countries should try, as their duty, to fight terrorism and restore peace and stability in the region.

Rouhani underlined that protection of territorial integrity and respect for geographical borders of countries has a great deal of importance for Iran, because tension along the borders of the countries may create instability in the region.

For his part, Mitov conveyed the greetings of Bulgarian president and prime minister to President Rouhani and said that Iran has an important role, not only in the region, but also in the world and that Sofia intends to develop its relations with Tehran in all areas.

He stressed the need for the two countries to tap into their capacities to develop bilateral relations, Mitov underlined cooperation in the field of energy.

The Bulgarian foreign minister also referred to Iran’s constructive role in regional developments and the necessity of the fight against terrorism, and said that Bulgaria supported Iran’s presence in Vienna talks and hailed it as positive and very constructive because Bulgaria believes everybody should help eliminate the problem in Syria.

He said that the fight against terrorism, maintaining territorial integrity of Syria and holding national election are among the priorities of Bulgaria when it comes to Syria.

Concerning religious followers and different ethnicities in Iran and their peaceful life together, Mitov said that Iran could be a suitable example for other countries in the field of co-existence of religions and ethnicities.

Mitov arrived in Tehran on Sunday and delivered a speech for students and professors of International Relations School of Foreign Ministry and said that taking on ISIS is a priority for Bulgaria.