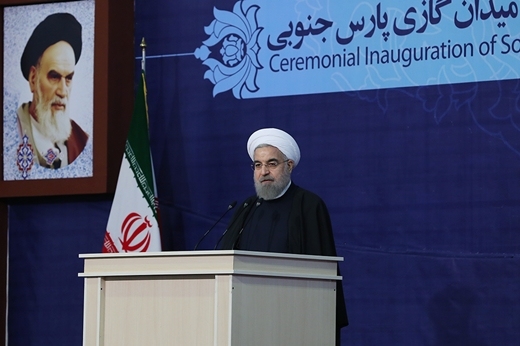 President Hassan Rouhani foresees an 'economic boom' in the post-sanctions era, which, he predicted, would begin in days to come.

He made the remarks in a ceremony held to inaugurate two new phases of the South Pars Energy Zone in Assalouyeh.

Rouhani said the next Iranian calendar year (starting March 20, 2016) will be the year of economic boom.

Iran’s budget will be less reliant on oil revenues, the President added.

He said that the share of oil income in the next year budget will be only 25 percent.

It is worth noting that Economic Affairs and Finance Minister Ali Tayyebnia had said based on international economic forecasts, next year is going to herald the highest economic growth across the region extending from north of Africa to the Middle East.

Following the removal of sanctions, Iran will be able to have new possibilities and access to foreign resources which were inaccessible due to the sanctions.

President Rouhani arrived in Assalouyeh on Monday morning in this southern province to inaugurate two new phases of the South Pars Energy Zone.

Phases 15 and 16 of the South Pars Gas Field, Bushehr province, will be launched on Monday in a ceremony to be attended by the president.

Once fully launched, the phases’ daily production will include 56.6 mcm of natural gas, 75,000 barrels of gas condensate and 400 tons of sulfur.

The phases will raise the country’s revenues $20 million per day. Also, given that most Iranian petrochemical units are suffering from a shortage of ethane, the phases can mark a turning point in providing feedstock to domestic petchem complexes.

Since December 2013, the phases have produced 15.5 billion cubic meters of natural gas, 14 million barrels of gas condensates, 3,000 tons of sulfur and more than 5,000 tons of ethane.

The phases’ development projects were implemented by a consortium of Iranian companies.