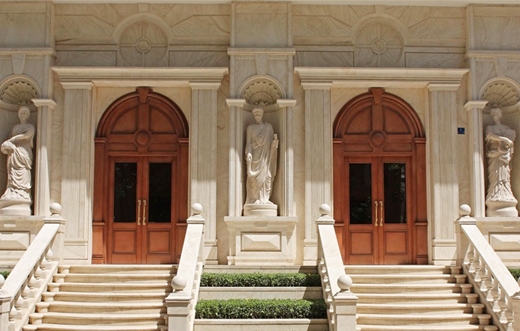 One architect believes that neoclassical, Roman-style architecture has taken over urban spaces and places, giving them fake characteristics. Another says, “The classic façades taken from ancient Rome and Greece are poor and vulgar imitations which have become popular in Tehran. Even the countries that popularized this style originally have stopped using such facades in their architecture now.”

The following is an ISNA interview about the prevalence of Roman architecture in Tehran, talking to architects Kamarn Naderafshari and Giti Etemad, and translated by IFP.

Kamran Naderafshari: “Those types of architecture with specific cultural references, which refer to a certain historical period, raise the question of what that history is and why this reference has been used. Classical architecture has rules, none of which are obeyed in these buildings, neither in totality nor in detail. Therefore these buildings can be confusing for those interested in history.”

“Those who are the “children of their own time” criticize and reflect on their own specific period. Rumi, for instance, criticized his own era and created a new style. Naturally, this was far from being imitation. If we are referring to a certain culture, it should certainly be relevant to our own culture. This doesn’t necessarily mean sticking historical traditions. We should work on our contemporary culture as well. Culture is not a power supply, but a legacy that’s been passed on, hand-to-hand, and we must pass it on to future generations.”

Giti Etemad: “The first reason for the prevalence of this style of architecture is the emergence of an upwardly mobile section of society, being capitalists, owners or employers. The second complementary cause is the existence of builders with no commitment and awareness towards their land, culture, urban texture and architecture.”

“We realize how commercial and identity-less this new architecture is when we compare them with Iran’s traditional architecture, or with foreigners who created masterpieces based on Iranian styles.”

She highlighted the fact that this faux-Roman architecture causes other damage to the city, more than just its undesirable appearance. “Suitable materials for Tehran, based on its climate and geography, include bricks and concrete. Knowing that Tehran is in a seismic zone, using heavy decorative materials (thick pillars, statues, and stone walls) could cause a tragedy in an earthquake.”

“This doesn’t mean we should tie the hands of a creative architect. One can also create masterpieces using bricks and concrete.”

She believes that this style of architecture shows a deep class division, “In Iran’s traditional architecture, this class division would usually be found inside the houses and in their size, but now it is mainly seen in the facades of the buildings.”

She added, “The facade of a building is an influential element on the surrounding urban space, and this space is the property of all the citizens. This is why urban managers and the City Council of Tehran (with an architect as its chairman) must pay more attention to this matter.”