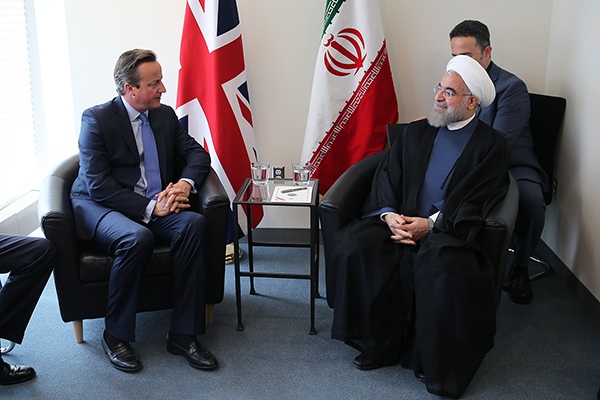 If we do not eradicate the roots of terrorism even if we successfully fight it in one region, it may spring back immediately in another, President Rouhani said.

The reopening of Iran and Britain’s respective embassies is a starting point for better relations between the two countries, President Rouhani said at a meeting with British Prime Minister David Cameron on the sidelines of the 70th Session of the UN General Assembly in New York Monday.

“The reopening of the two countries’ embassies shall be a suitable starting point in creating dynamic and developing relations between the countries,” the president said.

Rouhani expressed concern over the spread of terrorism and insecurity throughout the world and said, “If we do not eradicate the roots of terrorism even if we successfully battle it in one region, it may spring back immediately in another.”

At the meeting, the two also talked about steps necessary to be taken before sanctions against Iran can be removed as part of the nuclear agreement signed on July 14.

For his part, Cameron recalled Britain’s efforts during the course of the finalization of JCPOA, a visit to Iran by British Foreign Secretary Philip Hammond, and sending commercial delegations to the country as goodwill gestures by the UK aiming to further relations between Tehran and London.