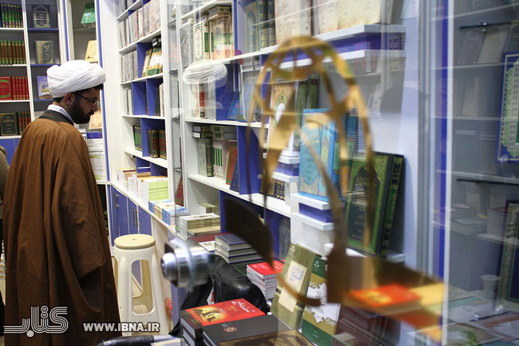 The holy city of Qom is a major hub for the publication of religiously-themed books, Iran’s Book News Agency (IBNA) on January 1 quoted a deputy minister of culture and Islamic guidance as saying.

What comes below is a partial translation of Abbas Salehi’s remarks at the opening of a fourth specialized exhibition of religious books in Qom on Wednesday. It is followed by a critical analysis offered by an expert of religious books:

“Qom accounts for around 12 percent of the books released in Iran. As many as 5,601 books have been published in Qom this year, of which 3,180 were on their first print. […]

“About 183,000 religiously-themed book titles have been released in Iran after the Islamic Revolution (1979-2013), with 20,000 being on their second reprint. The remaining has yet to go to reprint.

“The existing stats on religious books should be revised. We need to counter the appropriation of books which is a common occurrence in the area of religious books. [The publication of pre-existing books in one’s own name] is a cultural ploy which causes multiple ills. We need to legally and religiously counter this practice which has tarnished the image of the book industry.

“Cultural diplomacy can be better exercised in the presence of foreign publishers and this is one of the objectives the government is pursuing.”

“Since books are traded as a commodity we can look at the publishing industry through an economic prism.

“Books are a medium through which an author signals his/her message to the readers. A medium which holds no appeal is meaningless.

“Books are also a cultural phenomenon and part of a nation’s cultural identity. They can build civilizations and reflect a nation’s human, social and religious identity.