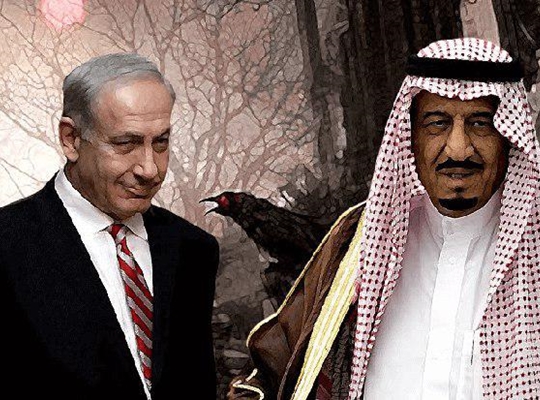 A Qatari newspaper has published documents suggesting Saudi Arabia and Israel were plotting to disintegrate Syria even decades ago.

The pro-government Qatari Al-Sharq newspaper has released documents about the Saudi Foreign Ministry’s covert cooperation with the Israeli regime back in 1966.

The documents show the Al Saud rulers were hand in gloves with Tel Aviv even 51 years ago to disintegrate Syria, occupy Egypt’s Sinai Desert and secure domination over Gaza as well as the West Bank, writes the Persian-language Kayhan newspaper.

The Qatari paper has published confidential telegraphs sent by the Saudi Foreign Ministry, shedding light on new dimensions of the plot hatched by the Saudi Wahhabi government against Islamic and Arab nations and countries, especially the Palestinian nation.

According to the daily, Riyadh explicitly asked the Israeli regime on December 27, 1966 to occupy the Sinai Desert. While trying to reinforce the pillars of the Tel Aviv regime, Riyadh also proposed an attack be launched against Syria and part of the country be disintegrated.

Based on the documents, Saudi Arabia also called on the Israeli regime to bring Gaza and the West Bank under its control to impede any movements by Palestinians or efforts by any Arab country to liberate Palestine. By this move, Riyadh actually sought to eliminate Palestinian refugees’ right to return to their homeland.

The papers also show that the Israeli regime had planned carefully to normalize relations with Saudi Arabia, that Mossad had provided the Saudi intelligence apparatus with confidential information, and that the assistance has considerably increased since 2012.

No wonder Riyadh has opted to provoke Tel Aviv in order to deal a blow to Iran and the Lebanese Hezbollah movement. Saudi Arabia is also seeking to establish relations with Israel. Anwar Eshki, the director of the Middle East Centre for Strategic and Legal Studies, which has turned into a forum for Saudi Arabia to normalize their relations with Tel Aviv, says Riyadh wants to laud Israel.

On the same note, the Israeli Haaretz newspaper expounded in an article on April 15, 2012 on a meeting between the then Saudi defence minister and his American counterpart Leon Edward Panetta, where they discussed Iran and the unrest at the base of the US Fifth Naval Fleet. According to the article, there are links between Saudi Arabia and Israel, Iran is their common enemy and Washington supports both of them.

The documents also unmask the different dimensions of an agreement between Saudi Arabia and Israel known as the deal of the century. The papers show that Kushner, Trump’s son-in-law, reached some agreement in that regard during his trip to Saudi Arabia before Mahmoud Abbas travelled to Riyadh and expressed his opposition to Kushner’s proposal. However, the deal of the century had been done, and Trump himself revealed it after Riyadh showed reluctance to announce it. Israeli Prime Minister Benjamin had acknowledged earlier that Israel’s relations with some Arab countries had reached an unprecedented level.