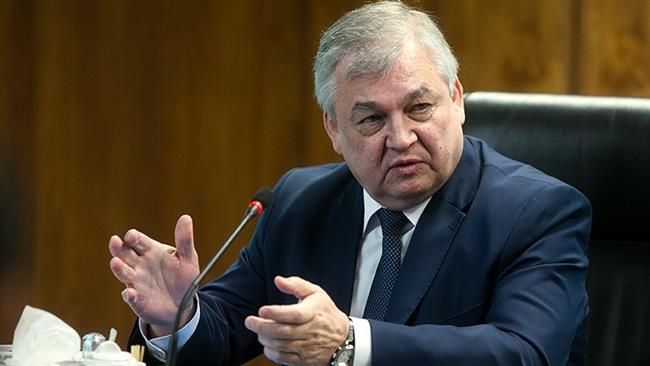 Russia's special envoy on Syria, Alexander Lavrentiev, is due in Tehran to hold talks with senior Iranian officials on the latest developments in the war-ravaged Arab country.

Lavrentiev, who will arrive in Tehran on Sunday, is to sit down with Secretary of Iran’s Supreme National Security Council (SNSC) Ali Shamkhani.

The Russian envoy will discuss ways to hold more negotiations on the promotion of political and security initiatives after the recent Syrian peace talks in the Kazakh capital of Astana.

He is scheduled to inform the SNSC secretary about Russian President Vladimir Putin’s stance on the ongoing regional issues and the need for bolstering multilateral cooperation in the fight against terrorism to put an end to the Syrian crisis.

The two-day intra-Syrian talks between Damascus and opposition groups concluded on January 24, with Tehran, Moscow and Ankara agreeing on the establishment of a trilateral mechanism to support the ceasefire in Syria and monitor possible violations.

Syria has been fighting foreign-sponsored militancy over the past six years.

De Mistura estimated in August last year that more than 400,000 people had been killed in the Syrian crisis until then. The UN has stopped its official casualty count in Syria, citing its inability to verify the figures it receives from various sources.