Protests Rage in US over Brown’s Death 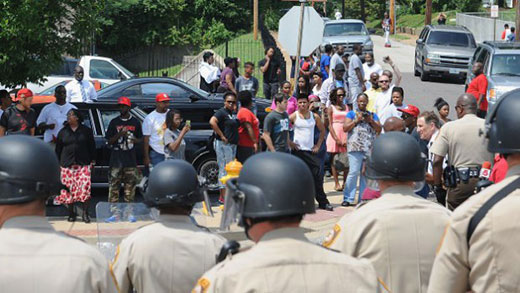 Protest and unrest continue in the US state of Missouri over the shooting death of an unarmed black teenager by a police officer.

The fatal shooting of 18-year-old Michael Brown by an officer on Saturday in Ferguson– a predominantly black suburb a few miles north of downtown St. Louis County — has sparked large protests, clashes and looting across the county.After two nights of violent protests, President Barack Obama called the fatal shooting a tragedy and urged Tuesday for a thoughtful response.“I know the events of the past few days have prompted strong passions, but … I urge everyone in Ferguson, Missouri, and across the country, to remember this young man through reflection and understanding,” Obama said in a statement.Police officers, some in military-style uniforms, some carrying high-powered rifles and wearing balaclavas, fired teargas, rubber bullets and wooden baton rounds into the crowds, The Guardian reported Wednesday.“We have a right to assemble, a right to freedom,” said Paul Muhammad, a protestor. “But here we are facing what looks like a military imposing martial law. It is not acceptable.”The Police Department in the city of Ferguson refuses to reveal the name of the officer responsible for Brown’s death, citing threats to his safety.Amidst the current unrest, a second police-involved shooting was reported overnight in Ferguson.About 1:00 AM on Wednesday, multiple shots were fired and four or five armed individuals were seen, wearing ski masks, running near the intersection of Chambers Road and Sheffingdel Court in Ferguson, St. Louis Post-Dispatch, reported.Police responded to the shootings and shot and injured one of the suspects. The man was in critical condition in hospital, a police spokesman said.This is while a woman was shot in the head with a projectile about 12:20 AM in a drive-by shooting. Police said they were looking for four or five men. The woman was shot once and is expected to survive.The Federal Aviation Administration approved a no-fly zone over Ferguson after police said one of their helicopters came under fire on “three or four occasions.” The no-fly zone is expected to remain in place until Monday.Rev Al Sharpton, veteran civil rights leader and TV host, appeared alongside Brown’s parents on Tuesday to appeal for calm after two nights of protest in which about 50 people were arrested.Vigils are being planned across the US for Thursday night in response to recent incidents of police brutality – including the death of Michael Brown.Organizers say the vigils are part of the National Moment of Silence (#NMOS14), and that ceremonies will be held in more than 50 cities across 30 states.Brown’s death has invoked the outrage after the 2012 racially-charged shooting of 17-year-old Trayvon Martin by a Florida neighborhood watch organizer who was later acquitted of murder charges.The incident has once again raised questions about excessive police force when confronting black suspects.