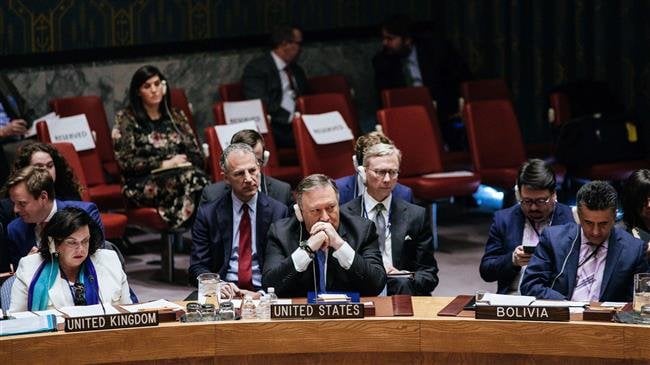 Foreign Minister Mohammad Javad Zarif hits out at US Secretary of State Mike Pompeo for making another “mockery” of the UN Security Council (UNSC) by taking the podium there to brag about Washington’s violation of a resolution adopted by the same council on the 2015 Iran nuclear deal.

Zarif was referring to Security Council 2231 Resolution, which endorsed the multilateral deal. At a UNSC meeting on Wednesday on the implementation of that resolution, Popmeo repeated the claim that Iran was in “open defiance” of it.

The top US diplomat also voiced concerns against Iran’s missile activities and urged restrictions on them under Resolution 1929 of 2010. He also announced plans to build a “coalition of responsible nations” against what he called Tehran’s “reckless ballistic missile activity.”

The top US diplomat further defended the decision by President Donald Trump’s administration earlier this year to leave the Iran nuclear agreement.

The US also re-imposed on Iran all the sanctions it had lifted under the deal, officially called the Joint Comprehensive Plan of Action (JCPOA), threatening secondary sanctions against the businesses that fail to abide by Washington’s restrictive measures.

On Thursday, Zarif took to Twitter to respond to Pompeo’s comments at the council, saying that he mocked the council by bragging about violating Resolution 2231 and even speaking of plans for more such violations.

He said the “isolated” US became the first permanent member of the council to punish other countries for complying with Resolution 2231.

Zarif further stressed that Pompeo’s remarks confirmed that Washington and its allies rely on “defunct” Resolution 1929.

Resolution 2231 terminated the provisions of previous UNSC resolutions against Iran, some of which had imposed restrictions on Iranian missile activities. Such activities are not prohibited under Resolution 2231, which merely calls on Iran “to refrain from any activity related to ballistic missiles designed to be capable of delivering nuclear weapons.”

Tehran has always emphasized that it has no nuclear warheads and that none of its missiles have been designed to carry nuclear weapons. The International Atomic Energy Agency (IAEA) has repeatedly confirmed Iran’s compliance with the accord.

The Security Council met late Wednesday at the request of France and Britain days after Iran tested a conventional ballistic missile.

At the meeting, the European allies of the US echoed Pompeo’s “concerns” about Iran’s ballistic missile activities. They, however, stopped short of claiming that Iran was violating Resolution 2231, and reiterated strong support for the Iran deal, instead, amid European efforts to protect the JCPOA as well as their business links with Iran in the face of US sanctions.

In response, Russian Ambassador Vassily Nebenzia took a veiled but clear swipe at Pompeo as he denounced attempts to “fan anti-Iranian hysteria.”

“There is no proof that the ballistic missiles can carry a nuclear load,” Nebenzia told the council.

Nebenzia added that some council members were using Wednesday’s meeting “to discuss the so-called regional behavior of Iran, which they depict as though it were the only source of all the woes in the Middle East.”

“What they do not voice is any kind of a substantive proposal on this topic and sometimes we’re left with the impression that the only goal is to further escalate anti-Iran hysteria and to demonize Iran,” he said.

Iran has repeatedly said its missile activities are in line with its deterrence doctrine, and that it will continue testing conventional missiles.