Perhaps a small exhibition, but surely with great goals and achievements 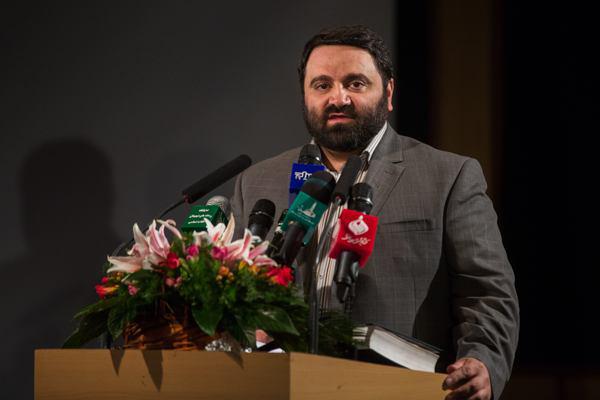 Mansour Amini emphasized the boundary-crossing function of cyberspace in stimulating the world’s curious minds, especially the youth of today. He also stressed the need for better exploitation of this channel for scientific exchange and knowledge accumulation. He requested robust support from the relevant authorities, and also asked that considerable attention be paid in Iran’s 6th Development Plan to the threats posed by new communication technologies.

Referring to the fact that authorities must be vigilant towards enemy threats, the head of the Seraj Cyberspace Organization and the Secretary of the Islamic Revolution Digital Media Fair and Festival said, “The executive authorities in the post-sanction period should trust the revolutionary, talented and elite youth in this field, instead of allowing foreign IT companies to take over.”

He spoke at the opening of the 3rd Fair and Festival on Islamic Revolution Digital Media about the incredible amount of effort by the Islamic Revolution Popular Front in cyberspace, saying “Cyberspace is both a threat and an opportunity.”

Amini continued, “Unfortunately, we don’t yet have something called a National Information Network. In this deplorable situation, cyberspace is neither an absolute opportunity nor an absolute threat. It is our performance which will determine the outcome.”

The Secretary of the Fair called attention to the Supreme Leader’s remarks this year about the capacity and threats of cyberspace. The Supreme Leader had said, “Today we are in a virtual intellectual battle. This battle is not against our interests in any means – in fact it’s in our interests. If we enter this battleground, taking what we need from Islamic thought and using the reservoirs of divine teaching, then victory will surely be ours.”

Amini emphasized the boundary-crossing function of cyberspace in stimulating the world’s curious minds, especially the youth of today. He also stressed the need for better exploitation of this channel for scientific exchange and knowledge accumulation, as well as listing the threats of new communication technologies, which included: “Degrading merit, spreading mental doubt, weakening beliefs, espionage and stealing information, serving Zionism and the inversion of the truth, targeting children and teenagers to disrupt local education, creating feelings of disillusion and humiliation in the youth, in addition to imposing Western thoughts and destroying other societies’ cultures in order to proliferate Western lifestyles.”

Mansour Amini reminded the audience of the necessity of spreading the activities of the Islamic Revolution Popular Front and asked the responsible authorities to take cyberspace threats seriously. He declared, “Today, our concerns with cyberspace are not political – they are about attacks on people’s beliefs and faiths.”

The Fair – Small but Great

The head of the Seraj Cyberspace Organization described the outstanding technical and vocational empowerment of thousands of Iranian specialists in new information and cyber communication technologies. He said that the main goal of this festival is to create an opportunity, through the Seraj Organization, for digital cyberspace activists to get to know each other, to exchange facilities and make scientific and professional connections.

He spoke of the diversity of activities in the field among more than 300 units in attendance at the festival, saying, “Unfortunately, limited facilities, and the exhibition location size allowed us to accept only half of the 600 applicants for the 3rd Fair and Festival on Islamic Revolution Digital Media. We have tried to host a spectrum of cyberspace activists to exhibit and introduce their latest achievements over these 6 days. In this fair – which might seem small in quantity but is great in quality and substance – there are participants from online media activists, programmers, information technologists, mobile application producers, animation activists, etc. Some of them have developed unique and creative projects, such as a cyber-program for ending drug addiction. Also, there are workshops being held for visitors during the exhibition, under the subject of “User Education in Cyberspace”.”

Amini emphasized, “The government should consider national empowerment in the post-sanctions era and trust in the power of youth.” He continued, “The executive authorities in the post-sanction period should trust the revolutionary, talented and elite youth in this field, instead of allowing foreign IT companies to take over.”

We Need a National Information Network!

At the end, the Seraj Cyberspace Organization head mentioned that it is not possible to solve defects and problems solely by setting up fairs and festivals, conferences and speeches, but real action also needs to be taken. He said, “Some of the important points to be considered by the related authorities include: starting a National Information Network, providing local services, supporting a healthy competitive environment among those active within new communication technologies, and helping public and private sector resources to have an active presence in international interactions in the field of cyberspace.” He also complained about the government’s lack of attention regarding the National Information Network in the 6th Development Plan, and asked Parliament members to not to forget the importance of this project whilst checking this program.

Amini finished his speech with some remarks from the Supreme Leader, “Big works sometimes take a generation to achieve. We should continue moving forward. There are many projects that would have yielded results today, if we had started them ten years ago.”