Paintings Inspired by Persian Carpets on Show in Tehran 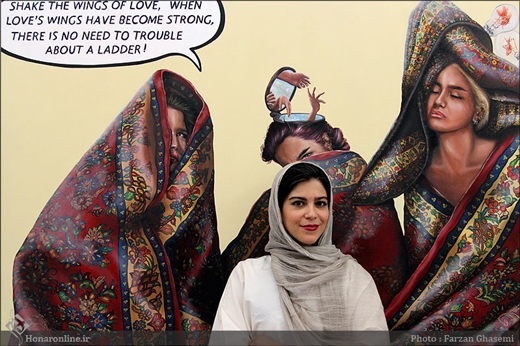 A new exhibition of paintings, inspired by the wonderful motifs and attractive colours of Persian carpets, has opened at Tehran’s Etemad Gallery.

Entitled Where Is My Ney? the collection by the young artist Homa Arkani opened on Friday May 27.

“In all the paintings, a carpet is a symbol of the living world and the motifs repeated on each carpet resemble the roles we are playing in this world,” Arkani told Honaronline on the opening day.

“The existing world in a carpet somehow resembles the repetition and the rhythm of birth, death and then rebirth again,” she added.

She also explained that she has made use of Rumi’s Masnavi  in her works as a source of inspiration, saying, “I have had a different look at the Masnavi, focusing on its social and cultural aspects, for they can be quite useful in today’s world.”

“The great potential of Rumi’s poetry is that it has been composed for all eras. It is even useful for us now, and I tried to focus on the cultural aspect of his works rather than the mystical side.”

The opening ceremony continued with a performance by musician Nader Mashayekhi.

“We aimed to give dimensions to the motifs of the paintings and turn them into three-dimensional artworks. The sounds heard during the performance refer to the ears observed here and there in the paintings, inviting us to be all ears and listen to the sounds of the world,” she explained.

There will also be another performance on Friday in the gallery.

The exhibition runs until June 7 at the gallery in the Niavaran district.

∗ Photo: Painter Homa Arkani poses at an exhibition of her works at Tehran’s Etemad Gallery on May 28, 2016. (Honaronline/Farzan Qasemi)