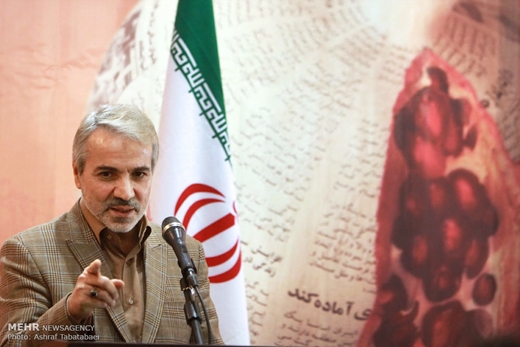 The government spokesman has said that the Cabinet respects the views of the Judiciary chief.

The government spokesman has said the current cooperation and like-mindedness among the heads of government branches is unprecedented.

Mohammad Bagher Nobakht, who is also the director of the Management and Planning Organization, made the remark in his weekly press conference which was held at the site of the Press and News Agencies Exhibition on Tuesday and thanked the Judiciary chief for closely cooperating with the Cabinet.

Entekhab.ir on November 10 covered the press conference. The following is the translation of part of Nobakht’s remarks which focused on the Joint Comprehensive Plan of Action, the Mina tragedy and comments by the Judiciary chief:

The Supreme National Security Council (SNSC) has been working on the country’s nuclear case and its decision on how the Joint Comprehensive Plan of Action should be implemented is now being enforced. A committee to oversee the implementation of JCPOA will be named in the near future.

The SNSC held a meeting on Sunday. It will hold another meeting later this week to decide – among other things – on members of the oversight committee.

In line with Iran’s follow-up efforts, an Iranian expert group has been dispatched to Saudi Arabia to identify those missing in the deadly stampede and reassert the violated rights of the Iranian people. As I have already said, the government will tap into all official and unofficial tools it has at its disposal to get to the bottom of this case.

To be honest, never in the previous governments has there been such good cooperation and like-mindedness among the heads of government branches. This period [the Rouhani presidency] is among the best periods during which officials are working together cooperatively. As for the Judiciary, I should thank the Judiciary chief on behalf of the Cabinet for his cooperation with the government, especially cooperation over the Joint Comprehensive Plan of Action.

Differences of opinion are normal and people may hold different views on one single issue. We abide by Article 57 of the Constitution which deals with the Separation of Powers [The powers of government in the Islamic Republic are vested in the legislature, the judiciary, and the executive powers, functioning under the supervision of the absolute religious Leader and the Leadership of the Ummah, in accordance with the forthcoming articles of this Constitution. These powers are independent of each other.].

But the fact remains that Article 113 of the Constitution has given special prominence to the president describing him as the highest ranking official in the country after the Supreme Leader and responsible for enforcing the law [After the office of Leadership, the President is the highest official in the country. His is the responsibility for implementing the Constitution and acting as the head of the executive, except in matters directly concerned with the office of the Leadership].

By the same token, the president sincerely spoke his mind in the presence of the media [a few days ago]. The government will pursue efforts to help ease the president’s concerns. On the other hand, we respect the viewpoints of the esteemed Judiciary chief.