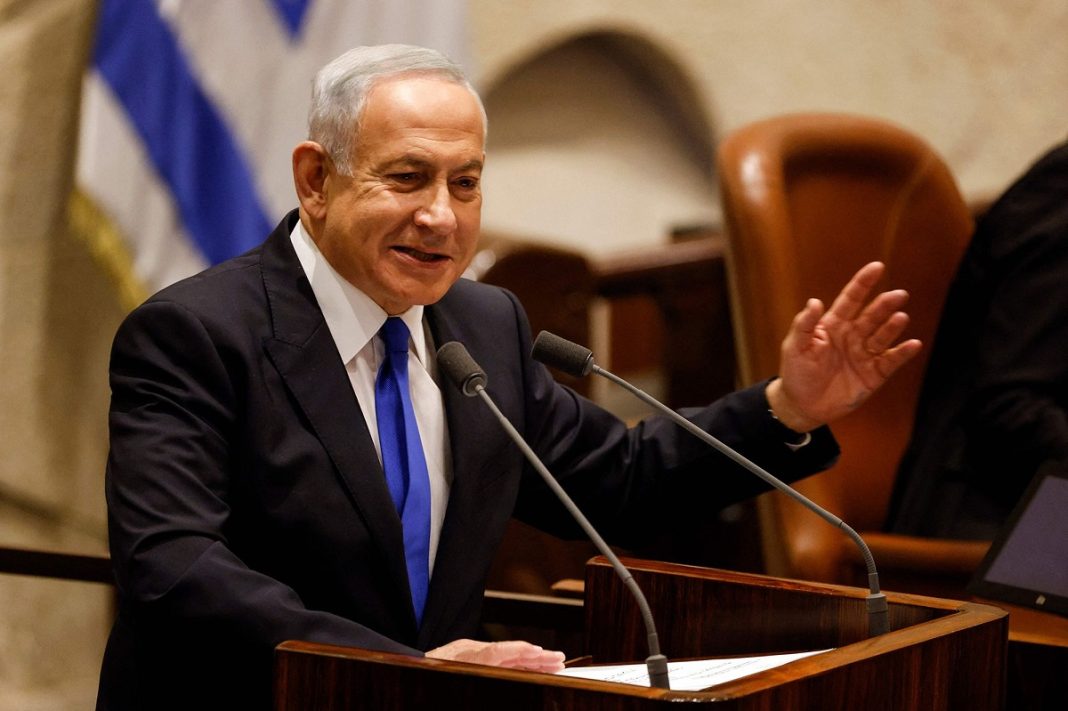 Benjamin Netanyahu is sworn in as Israel's new prime minister. This is the most far-right, religiously conservative government in the history of Israel with Bibi saying settlement expansion and stopping Iran's nuclear program being among his top priorities.

Netanyahu, 73, took the oath of office on Thursday, moments after Israel’s parliament, or Knesset, passed a vote of confidence in his new government. Of the parliament’s 120 members, 63 voted in favour of the new government, with 54 votes against.

His swearing in marks a personal return to power and the arrival of a government that has sparked fears among Palestinians as well as left-wing Israelis.

Netanyahu, who was prime minister between 1996 and 1999, and then between 2009 and 2021, addressed a session of the Israeli parliament, or Knesset, ahead of the vote.

Netanyahu, along with his coalition partners, has a majority in the Knesset. He was heckled during his speech to the Knesset, with opponents chanting that he was “weak”.

He said an end to the “Arab-Israeli conflict” would be his top priority, as well as stopping Iran’s nuclear programme and building up Israel’s military capacity.

Netanyahu’s win in the November 1 parliamentary elections was expected to end years of political unrest in Israel, with governments repeatedly falling, and elections held five times in less than four years.

Much of that was the result of intense political opposition towards Netanyahu himself, who is on trial for corruption, an allegation he denies.

However, it has taken weeks of jostling and the introduction of new legislation to keep his far-right and ultranationalist coalition partners happy, as well as his own Likud party.

The result has been a coalition that has explicitly called settlement expansion in the occupied West Bank, illegal under international law, its top priority.

That reflects the positions of far-right leaders who have been given top posts, such as Religious Zionism leader Bezalel Smotrich, and Jewish Power leader Itamar Ben-Gvir, who previously expressed support for Baruch Goldstein, a Jewish Israeli man who killed 29 Palestinians in a shooting at Hebron’s Ibrahimi Mosque in 1994.

Israel is heading in a “very dangerous direction”, left-wing Knesset member Ofer Cassif told Al Jazeera from a protest outside the parliament, adding that the new government’s arrival would mark Israel as a “fully-fledged fascist state”.

“The international community must be aware of that and act upon it,” Cassif added.

The make-up of the new government is likely to further inflame relations with the millions of Palestinians who live under Israeli occupation.

Palestinians have already faced their deadliest year since 2006, according to the United Nations, after Israel’s outgoing government launched an offensive in Gaza in August, as well as near-daily raids in the West Bank that have led to dozens of killings and arrests.

Liberal Israelis have also expressed reservations about the new government, particularly towards its stances on LGBTQ rights, and the prime positions occupied by ultra-conservative religious figures.

Israeli President Isaac Herzog, who occupies a largely ceremonial role, has himself warned of the potential harm the new Israeli government could bring about, and was previously caught in a hot mic saying that the “entire world” was worried about figures such as Ben-Gvir entering into government.

Netanyahu has sought to push back against some of those fears.

“We will establish a stable government for a full term that will take care of all Israel’s citizens,” he stated on Wednesday after his supporters in the Knesset pushed through legislation that paved the way for his government to take office.

One bill, which allows for a minister serving a suspended sentence to take office, was specifically designed to allow the head of the ultraorthodox Shas party, Aryeh Deri, to become a minister.

However, much of the focus, and the fear of the new government’s detractors – Israeli and Palestinian alike – has been on Smotrich and Ben-Gvir.

They form part of Israel’s wider Religious Zionism ideological movement. The men’s separate parties ran on a joint list in November’s elections to ensure that they would pass the electoral threshold before splitting once again.

Smotrich and Ben-Gvir, both of whom live in illegal settlements in the West Bank, will occupy senior positions in the new government – Smotrich will be finance minister and also have authority over settlements, while Ben-Gvir, who was convicted in 2007 of “incitement against Arabs” after he called for Palestinians in Israel to be expelled, will become national security minister with increased authority over the police, including in the occupied territories.

Palestinians now fear that will mean what they would consider to be even harsher policies towards them and are also fearful of the status quo of the Al-Aqsa Mosque in occupied East Jerusalem.

The president of the Palestinian Authority (PA), Mahmoud Abbas, noted on Saturday that the new Israeli government’s motto was “extremism and apartheid”.

However, Benny Gantz, Israel’s outgoing defence minister, told Abbas in a phone call on Wednesday that it was “critical to maintain an open channel of communication and coordination” between the PA and the Israeli government.