Neither US, nor Others Bold Enough to Attack Iran: IRGC 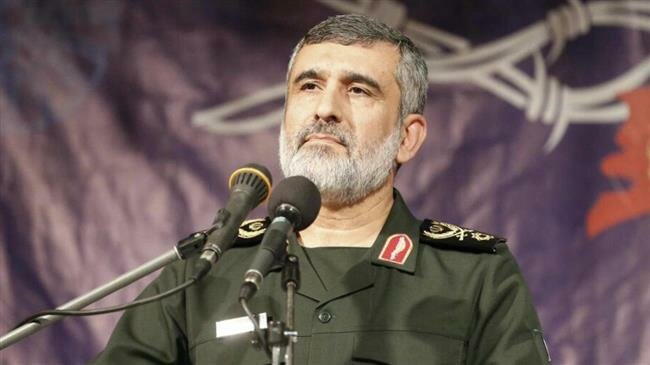 A senior commander of Iran’s Islamic Revolution Guards Corps (IRGC) no country would dare to stage an act of aggression against the Islamic Republic.

“The discourse of military warfare and the specter of war have been only fabricated by the West since the enemy is devoid of such a will [to attack the country], and this has been proven to all by now,” Brigadier General Amir Ali Hajizadeh, the commander of the IRGC’s Aerospace Division

The senior military official said, “Neither the US nor any other country has the audacity to carry out an incursion into Iranian territory.”

He further warned the Americans to “be careful about their behavior,” adding, “Countries cannot be expected to fall into line with them all the time.”

As an instance of the Islamic Republic’s promptness in reacting to enemy threatness, he pointed to the Corps’ recent downing of an intruding American spy drone.

Iran’s elite IRGC force shot down the drone over the southern Iranian province of Hormozgan on June 20. The aircraft had ignored the forces’ repeated warnings.

As per normal, the Americans did not observe the international laws, Hajizadeh said of the incident.

He went on to say that Washington had mistakenly underestimated Iranian authorities’ warnings against violating the country’s territorial integrity as mere ranting.

“They did not see it coming at all,” he said about Iran’s response.

The forces that responded to the drone incursion were observing their duty, he added, hailing the use of domestically-built the Khordad 3 air defense system for downing the trespassing RQ-4 Global Hawk.

Despite dismissing the prospect of military action, Hajizadeh, meanwhile, described the economic war being waged on Iran by the US and its allies as the main challenge currently facing the country, urging people and authorities to join forces to confront the American economic pressure campaign.

Last May, the US left a nuclear accord with Iran and other countries before returning the sanctions that had been lifted under the deal.

Tehran has denounced Washington’s latest antagonistic measures as yet another instance of its disrespect for the international law. It has also said the new measures have permanently shut all opportunity for dialog and has exposed America’s lies about seeking talks with Tehran.