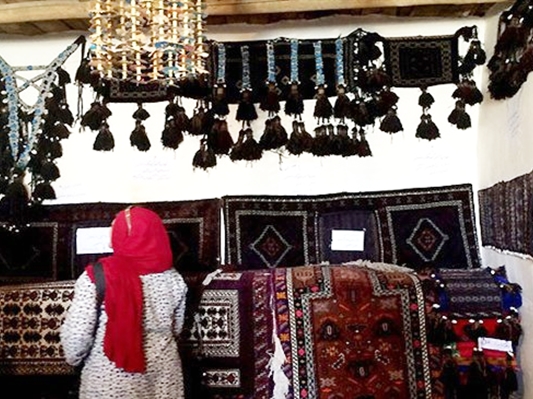 A room in a house in Tajmir Village in Sarbisheh, eastern province of South Khorasan, has been turned into a museum of local handicrafts and ancients items related to the rural populace.

A tribal family originally migrated to Mahiroud, 90km from the Afghanistan border, and established a village named Tajmir in Sarbisheh.

Gol Mir Khan, the headman of Tajmir Village, has decided to display ancient items and the dowry of his sister Zarbakht. They include handicrafts, utensils of tribal life and anthropology items from the village. Other items include camel bells, saddles, tents and coarse woollen cloth.

Also to be found are 200-year-old cushion-covers which have been coloured with natural dyes. Also, there are unique kilims (flat tapestry carpets) and jajims (two-sided carpets) in the house.

Gol Mir Khan and the other men wear Baluchi clothes. Rural women don hand-made and machine-made needlework items. Tajmir households had lots of camels and sheep, but a few of them remain.

Executives from the Carbon Sequestration Program have planted species such as saxaul and tamarisk in and around the village. They also suggested the establishment of an anthropology museum of Tajmir.