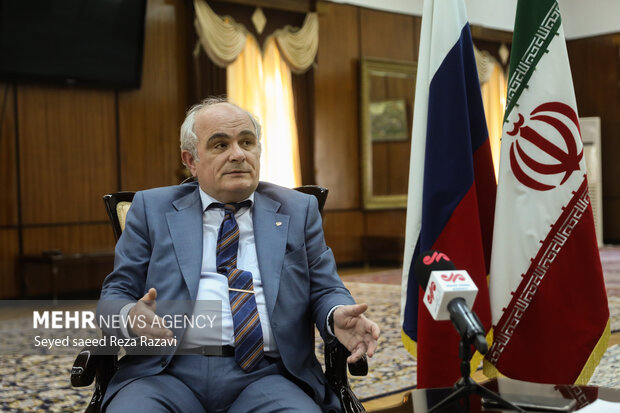 The Russian ambassador to Tehran says prior to the recent conflict in Ukraine, Moscow had sought the US and its allies’ assistance to solve the problems, but they refrained to do so. Levan Dzhagaryan added the West was just after an excuse to impose sanctions on Russia.

In addition to responding to his Ukrainian counterpart’s comments, the Russian ambassador talked of the country’s Ukraine operation objectives, Moscow’s stance on Luhansk, Donetsk, Crimea and Iran-Russia ties.

In a pre-dawn TV address on 24 February, Russian President Vladimir Putin officially announced the start of a “special military operation” against Ukraine. Russia has said that its operation in Ukraine is not the beginning of a war, but an attempt to prevent a world war.

But many countries around the world, including Europe and the United States, immediately condemned Russia’s move as a war against Ukraine and began to redouble their diplomatic and economic pressure on Russia. The West imposed fresh sanctions on Russia, aimed at cutting off its largest banks and preventing the country from importing critical technology.

To shed more light on the latest developments between Russia and Ukraine, Mehr News Agency reached out to Levan Dzhagaryan, the Russian Federation ambassador to Tehran.

Why did recent tensions lead to confrontation in Ukraine? What could be done to avoid war and settle the problems via talks?

Unfortunately, this painful war happened despite our will. We were forced to take this measure and no other choices were left for Russia. Defending Russian citizens, Russian ethnics in Ukraine and blocking membership of Ukraine in NATO are the goals of the ongoing military operation. Ukraine’s membership in NATO would mean the presence of the military alliance near borders of Russia and this will be a serious threat to our national interest.

We asked the US and the West to solve the problems through dialogue over and over but unfortunately, they refrained to do so. They were very interested in this war between two Slav, brother and friend countries. They were just after an excuse to impose sanctions on Russia.

But we will respond to their sanctions and our response will be painful. War was not our choice but no other choice was left for us. The West did not comply with its commitments under the Minsk agreements and didn’t respect their signatures as they did with the JCPOA.

Nowadays Russia is accused of violating Ukraine’s territorial integrity and sovereignty. What is Russia’s stance on this issue? And what is Russia’s plan for Ukraine?

First, the Western media has no right to accuse Russia of violating international law. Did the West respect international law when it bombed Serbia and Iraq? Why do Westerners think they have the right to do whatever they want, but we do not have the right to do anything for our own national security? Mr. Putin said the goal in Ukraine is to disarm Kyiv and rid the country of the Nazis. Ukraine must recognize Russia’s sovereignty over Crimea and become a neutral country. Regarding the Crimean Peninsula, it is necessary to say that Crimea belonged to Russia and during the time of Mr. Khrushchev, who was himself a Ukrainian, he gave this region to Ukraine and no one asked the people of Crimea what they wanted.

Regarding the actions of European diplomats who demonstrated under the Ukrainian flag, it can be said that they can raise thousands and even millions of Ukrainian flags, but this has no effect on the continuation of Russian military operations until the above-mentioned goals are achieved.

Many believe that if Russia succeeds in the current Ukraine arena in the post-war period, we will see changes in the current world order based on US hegemony. What is your opinion on this?

First of all, I emphasize that we will definitely succeed in Ukraine. The United States and the West have mistakenly thought that they can rule the world alone after the end of the Cold War. The era of a unipolar world is over and we are against it. Look at our Chinese friends’ economic and military achievements. We will not allow the United States and NATO to undermine our national interests. We respect international rules and regulations, but we do not allow our national interests to be harmed.

The Westerners told us that NATO would not come even one inch closer to Russia’s borders, but they lied and we were deceived. We do not trust them. Now, the Americans say that the issue of Ukraine’s membership in NATO is not on the table now, but what about the future? Did you see what the United States and Europe did with the JCPOA? Imagine what would be the Americans’ reaction if we deployed our missiles in Cuba and Venezuela.

Russia’s Achilles heel is its economy. The West is preparing large-scale sanctions against Russia. Can Russia withstand economic pressures?

The United States and its allies are making some efforts to exclude Russia from the energy market and even from the UN Security Council. Is this possible?

If Russia does not have a veto, the United Nations will lose its meaning. The US Congress is not the decision-maker on this, and the Europeans themselves have many differences with themselves. We supply 40% of Europe’s gas, we also sell a lot of oil to the United States, and our eastern neighbor China, which has also problems with the United States, has good relations with us and buys energy from us.

First of all, let me clarify that Ashraf Ghani was not an ally and he was just a puppet. Americans’ behavior stems from the thinking of Americans who call themselves an “exclusive nation”. They believe that Americans have the right to do everything, and others have no right to do it. They consider themselves the gendarmes of the world, but this is not acceptable to us at all, nor is it acceptable to China and Iran.

Some analysts believe that the Ukraine war is a quagmire that the Americans cleverly prepared for Russia, trapping Russia into the quagmire. What is your opinion on this?

I do not think so. Mr Putin said Soviet leaders had become politically and economically paralyzed in recent years and had lost control of the country. The Soviet intervention in Afghanistan was also a mistake that weakened the country’s strength. Our economy was also very weak at that time. Our past experiences prevent the repetition of old scenarios. We can not be deceived. They think they have made Ukraine another Afghanistan for us. Their plans will not succeed and the weapons they bring to Ukraine will not work. What happened in Ukraine is the result of the vile actions and provocations of the Americans. Their goal is to destroy Ukraine, like Afghanistan, Libya, Syria and Iraq.

This is one of their goals and they are trying to do so but they will unlikely succeed. They cannot find a reliable alternative source for Russian gas. However, we are ready for this scenario too and we anticipated this issue, and this issue was not unexpected for us. We have learned from past experiences.

It can be concluded that the Americans will not be able to achieve their goals because you have learned from past experiences and Russia today is different from the past and its economic and military power and experiences are incomparable to the past. Is it true?

Yes, in some areas, such as arms, even we have more advanced weapons and we have been able to create a balance, so they do not dare to take action against Russia. They know very well that they will receive a crushing response if they take any action.

Recently, the Ukrainian ambassador stated in an interview with the Mehr News agency that the only party that did not commit to the “Budapest Treaty” was Russia. In line with the impartiality policy of Mehr News Agency and giving equal opportunities to the parties, do any comments from you in this regard that you like to share with our audience?

Yes, before I answer him, let me make a point. In 2010, I was an observer of the elections in Ukraine. Mr.Yanukovych was elected at the time, and everyone agreed. But why did the United States and Europe launch a color coup in 2014? We ask the United States and Europe that consider themselves as supporters of democracy, why did you support this coup? The answer is that the Westerners wanted to turn Ukraine into an anti-Russian country.

But according to international conventions, it is the countries that are bound by their agreements, not the governments.

Yes, but what happened at that time was a coup and that government was an illegitimate government. Why should we recognize them? We did not recognize that government at that time. Europe and the West have double standards. For example, Mr. Zelensky recently spoke at the Munich Security Conference about his desire to acquire a nuclear weapon, but the West remained silent. Compare this with the West’s approach to the Iranian nuclear issue.

Minsk’s commitments should also be forgotten. It is too late because they did not respect their signature. We will close this page and open a new one.

How do you see the future of Iran-Russia relations during the 13th government?

I am very optimistic. Especially after Mr. [Ebrahim] Raisi’s visit to Moscow. This trip has opened a new page in the relations between the two countries. We are waiting to hold a joint commission of the two countries if Corona subsides. This time Russia will be the host.

Most of the achievements of Mr. Raisi’s visit to Moscow have been in the economic field.

Finally, I would like to emphasize once again that my feelings towards the Iranian people are friendly. I have worked in Iran for about 15 years. The issues that arose regarding some photos were just a misunderstanding created by the enemies of Iran-Russia relations, and I never intended to insult the Iranian people.