Meeting the Italian Artist who Writes Slogans on the Walls 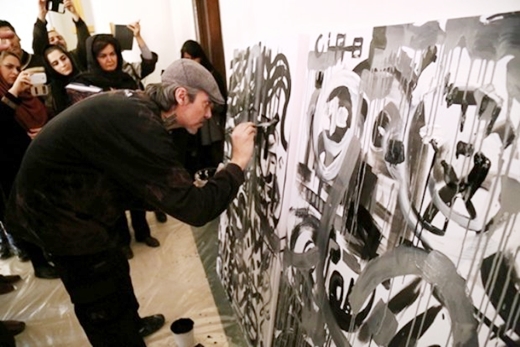 These days, the street artist Luva Massironi - one of the pupils of the well-known visual artist Rammellzee, is a visiting guest at the 8thFadjr International Festival of Visual Arts.

As reported by Mehr News, Luca Massironi (an Italian artist from Milan, who is a well-known street artist in Europe and the US) is a guest artist at the 8th Fadjr International Festival of Visual Arts. He paid a visit to the event’s exhibition at Saba Institute of the Iranian Academy of the Arts.

On the margin of this festival, Massironi organized a workshop at Saba Institute for students, and also created an art piece after introducing himself.

In his workshop, he said, “My art started with writing slogans in the streets. I started to write slogans in the streets of Milan and New York which people welcomed. Slowly, they gained artistic value. I moved to New York to learn street art and to become the disciple of Rammellzee, the famous visual artist. I created many pieces with him over a long period.”

Later, he displayed some photos of his street artworks, then created a new one in the workshop.

In this piece, which has similarities to calligraphy, Massironi presented a type of abstract texture to the students, saying, “This has been inspired by the feelings and energy that I’ve got from you, so in fact, this piece belongs to you more than it does to me.”

The Italian artist continued, “This is the nature of street art. You present your feelings inspired by the environment, through visual elements like dots, lines and textures.”

Luca Massironi was born in Milan in 1970, and was a disciple of Rammellzee, who was one of the world’s most well-known street artists. He is also a sculptor, performance artist and graffiti writer and mostly works in Europe and the US.

The 8th Fadjr International Festival of Visual Arts runs until March 8 in Saba Art and Culture Institute, under the management of Mojtaba Aghaei.