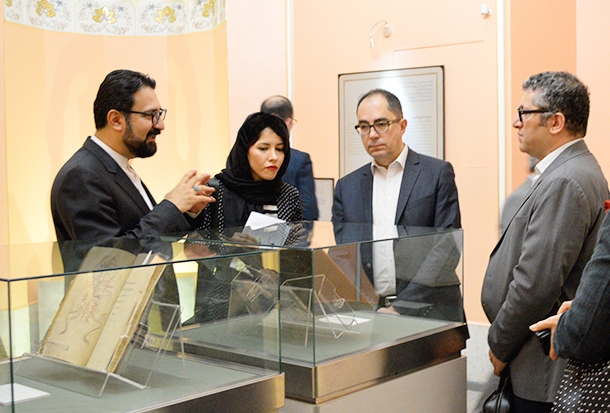 In his first visit to the grand museums of Tehran on Saturday, the director of the Paris’ Louvre Museum, Jean-Luc Martinez, explored the Malek National Museum and Library, and expressed interest in cooperation between the two entities.

According to IBNA’s correspondent (quoting from the public relations office of Malek National Museum and Library), during his visits, Jean-Luc Martinez was accompanied by his wife Pascal Martinez; the director of the Louvre Museum’s Ancient East Department Marielle Pic; the director of the Louvre Museum’s Islamic Arts Department Yannick Lintz; the political advisor of the Louvre Museum’s director Alberto Vial; and the French Cultural Attaché to Tehran.
Amazed by the cultural artistic works which the Malek National Museum and Library contains, Martinez appreciated the efforts of Hossein Agha Malek, the founder and patron of this historical institution, in collecting a unique treasure.
“The Louvre Museum is very interested in launching collaborations with the Malek National Museum and Library, and holding joint projects, including exhibitions,” he said.
The director of one of the world’s largest museums will also have meetings with Iranian officials, such as the Head of Iran’s Cultural Heritage, Handicrafts and Tourism Organization (ICHTO), Masoud Soltanifar, and a number of curators.