A look at Iranian newspaper front pages on Dec. 2

Iranian dailies gave extensive coverage Tuesday to a press conference of Deputy Judiciary Chief Gholamhossein Mohseni Ejei in which he touched on a wide range of issues including cases involving former President Ahmadinejad, former Vice-President Mohammad Reza Rahimi, those behind recent acid attacks, and the battle against drug traffickers. A rise in bread prices also made front-page headlines. The fluctuations of the foreign currency market which have seen the rial lose its value against major foreign currencies were at the center of another top story of the day.

Afarinesh: “Those behind the acid attack on Dr. Siamand Anvari, the director of the capital’s Ziaeian Hospital have been taken to police custody,” said Gholamhossein Mohseni Ejei.

Afarinesh: “Air strikes [against IS] without a political plan behind them won’t help Iraq,” said Parliament Speaker Ali Larijani. 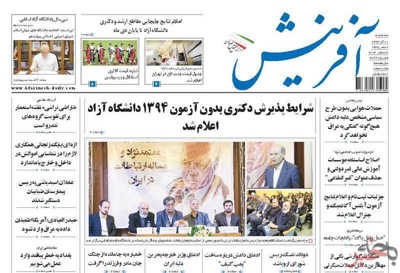 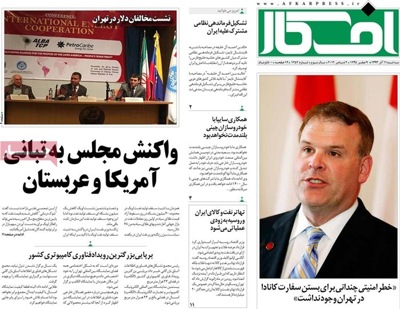 Aftab-e Yazd: “The decision to lower interest rates has been shelved for the time being.”

Aftab-e Yazd: “Reaction of Mohammad-Reza Shajarian to the decision by Hossein Alizadeh” is the headline of a story about the comments of Shajarian, an internationally-acclaimed vocalist, after Hossein Alizadeh, a leading Iranian classical composer and musician, declined to receive France’s Chevalier of Legion of Honor. Shajarian described his refusal as an act of protest against sycophants who take advantage of such titles. 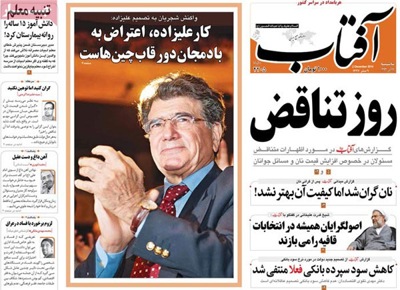 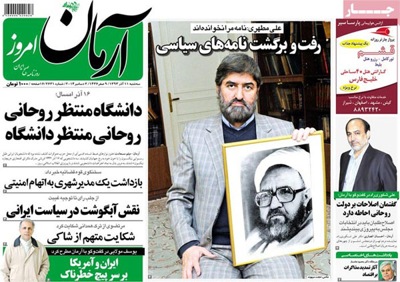 Asrar: “The previous government has left a legacy of thousands of problems,” said Vice-President for Parliamentary Affairs Majid Ansari.

Asrar: “If people act impulsively [in buying and selling foreign currencies], they will incur losses,” said Economy Minister Ali Tayebnia after recent fluctuations on the foreign currency market where the rial has lost value against the dollar. 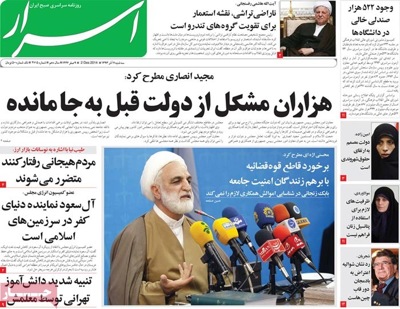 Emtiaz: “Two thousand marriages and 400 divorces are registered on a daily basis in Iran.”

Emtiaz: “Foreigners should be prepared for a return [to Iran for investment],” said Oil Minister Bijan Namdar Zanganeh. 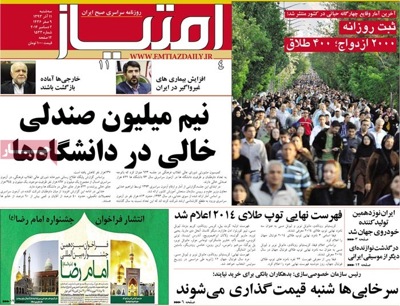 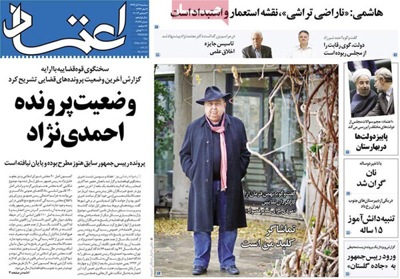 Ettela’at: “The East Caspian Sea railway project between Iran, Turkmenistan and Kazakhstan will become operational on December 3 with the presidents of the three nations in attendance.” 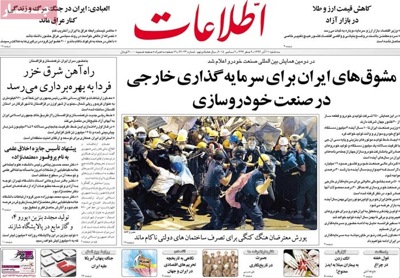 Hadaf va Eghtesad: “Inflation will plunge below 17 percent by March 21, 2015,” Governor of the Central Bank of Iran Valiollah Seif vowed. 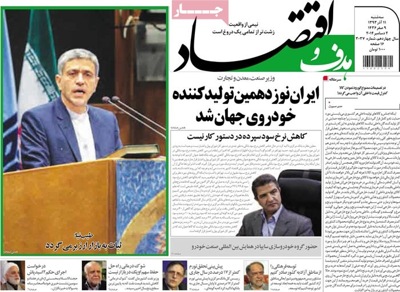 Hambastegi: “Fanning the flames of dissent is a plot by colonial and hegemonic powers to shore up extremist groups,” said Chairman of the Expediency Council Hashemi Rafsanjani in a meeting withthe UN Secretary General’s Iraq envoy Nikolai Miladinov. 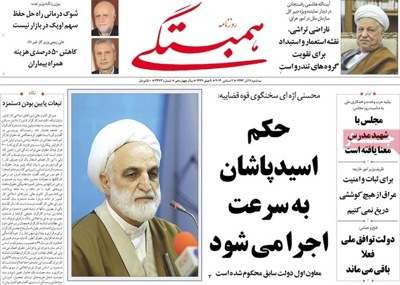 Hemayat: “Within a month, 15 tons of narcotics has been seized and 50 top drug traffickers have been taken into custody,” said Gholamhossein Mohseni Ejei. 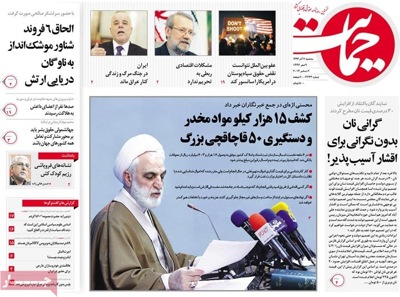 Iran: “World auto-making giants in Tehran” is the paper’s headline referring to a second International Conference on Auto Industry which opened on December 1.” 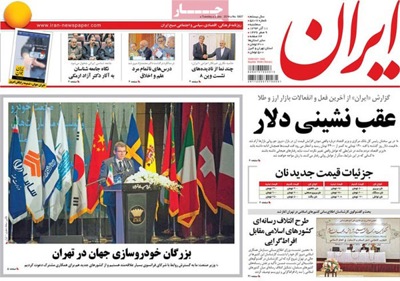 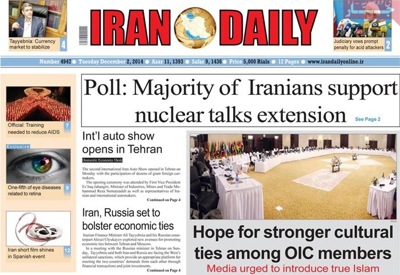 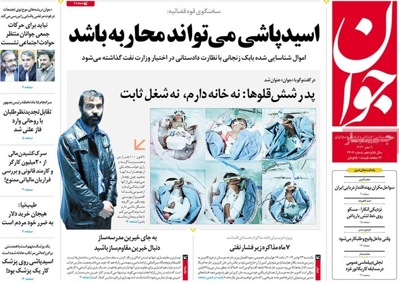 Jomhouri Islami: “The fight against terrorism requires attention to all political and social tastes,” said Chairman of the State Expediency Council Hashemi Rafsanjani. 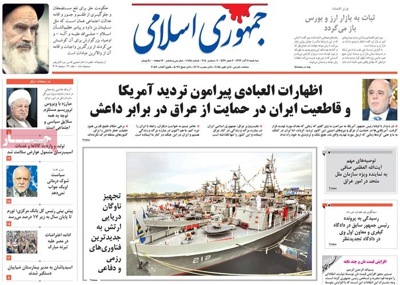 Kaenat: “Renault and Peugeot are vying for presence in Iran.” 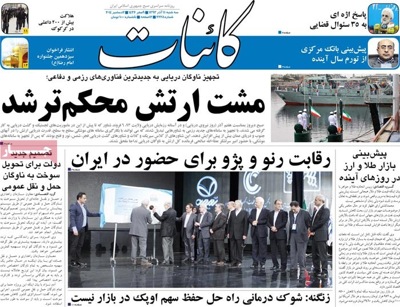 Kayhan: “The start of a week of revolution in protest at the exoneration of the pharaoh [a reference to former Egyptian Leader Hosni Mubarak].”

Kayhan: “Economic issues have nothing to do with sanctions,” said Parliament Speaker Ali Larijani. 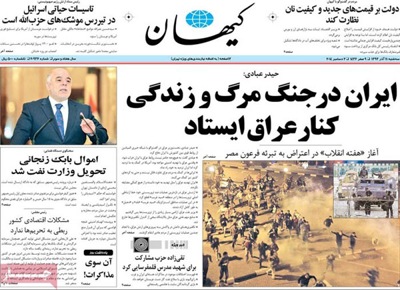 Resalat: “The structural problems of parliament have to do with the absence of a partisan system,” said Ahmad Tavakoli, a Tehran MP. 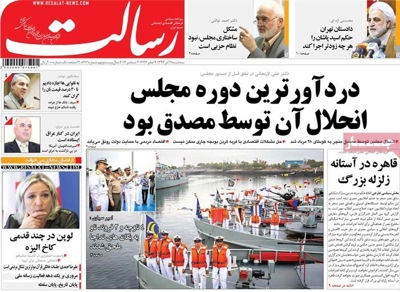 Sepid: “Despite the beginning of the end of the AIDS pandemic, contraction of the infection in Iran is on the rise,” said the deputy health minister. 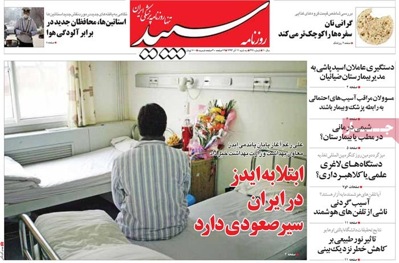 Sharq: “Concerns about an earthquake rocking the city were the reason behind the closure of the Canadian embassy in Tehran.”

Sharq: “ISIS has threatened to attack London with a dirty bomb [a weapon that combines radioactive material with conventional explosives]. 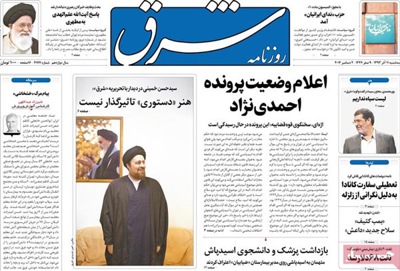 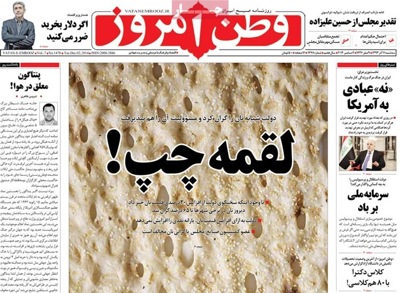