“Let’s Fight against Illegal Killing and Trade in Migratory Birds” 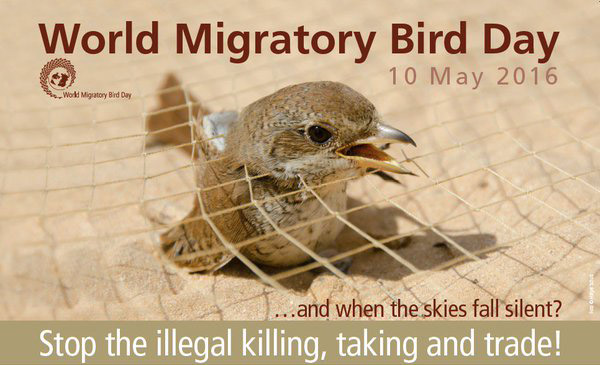 International Migratory Bird Day, with its current slogan of “When will the skies fall silent?”, highlights the steep decline in migratory birds. This loss is due to illegal activities like hunting, catching live birds and illegal trading.

Avian migration is a natural miracle. Migrating birds cross different countries with different social, political and environmental legislations during their migration. This means there’s a need for more international coordination between governments, NGOs, local societies and all stakeholders in protecting migratory birds.

For this reason, International Migratory Bird Day has been held annually on May 10th around the world with the purpose of raising public awareness and getting government support and attention in protecting migratory birds.

Iran is a stopover on many birds’ migration routes. It is a key point in annual migrations from China, Kazakhstan, Turkmenistan, Azerbaijan and Armenia in Asia, Siberia, Northern Europe as far as Scandinavia and Africa. This demonstrates the necessity of running far more protective projects in Iran regarding migratory birds.

Every year many migratory birds are illegally hunted in the north and south of Iran, especially in the lagoons of Mazandaran and Khuzestan provinces. Considering the high amount of infractions and the social conditions of those areas, we need a national and governmental commitment in preventing such activities.

With the emphasis on this year’s International Migratory Bird Day slogan, we hope that the government of Iran and the people of the country pay more attention to the matter of protecting migratory birds and stand together against illegal hunting and trading.