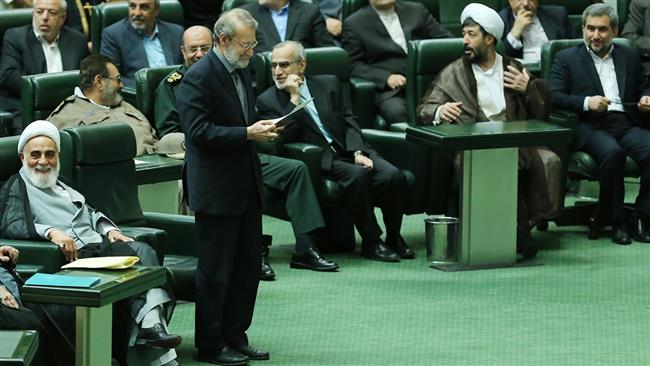 Larijani, a Conservative, won the post on Sunday with 173 votes in a race against Mohammad Reza Aref, who had been fielded by the Reformist camp and secured only 103 votes.

Independent members were apparently crucial in electing Larijani, because no single party holds an overall majority in the new Majlis.

He was also the speaker of the previous Parliament, which was dominated by Conservatives.

The vote served as the bellwether for the 290-member chamber’s inclinations, as several lawmakers from the Reformist camp broke ranks to vote against the head of their own List of Hope.

The election is the second victory for conservatives in the past week, after the Assembly of Experts – a body tasked with appointing or dismissing Iran’s Leader – voted Ayatollah Ahmad Jannati as its new chairman.

The Fars news agency quoted Reformist MP Mohammad Ali Vakili as saying that Aref will not run again for the post, meaning Larijani is almost certain to secure the position.

On Saturday, President Hassan Rouhani praised Larijani for supporting Iran’s nuclear pact and called for greater “interaction” between Parliament and the government to “solve the problems and crises of the country.”

The 290-member Parliament was inaugurated Saturday in the presence of 281 members, with three seats vacant after votes for two MPs were nullified by Iran’s constitutional oversight body, the Guardian Council, and a third member died in a car accident.

The new parliament includes a record 17 women, an achievement Rouhani said made him “very happy.”

In a message to the opening, Leader of the Islamic Revolution, Ayatollah Seyyed Ali Khamenei, hailed the big turnout of the people in the February elections as the “re-alliance with the Islamic Republic.”

The Leader called on the elected legislators to be vigilant in the face of regional and international challenges.

“The turbulent state of the region and the world and the international adventurism of oppressors and their vassals have confronted Islamic Iran with conditions more complicated than before,” said the message, read to a packed parliament chamber.

“It is your revolutionary and legal duty to make the Parliament a stronghold against the schemes, charms and impudently excessive demands of the arrogant powers,” the Leader said.