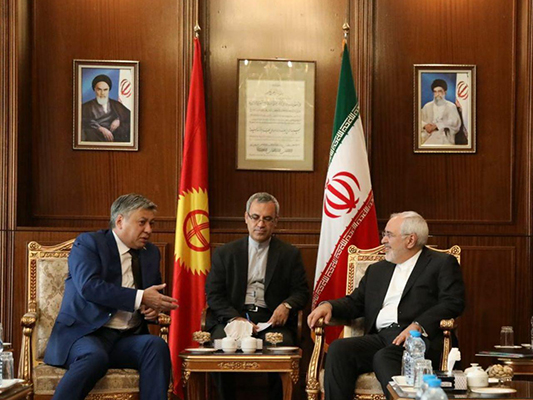 During their Friday meeting, the Kyrgyz official congratulated Iran on holding its presidential election in a democratic atmosphere, saying that the presidential votes led to the strengthening of the Islamic Republic’s status at the regional and international arena.

Abdyldaev also stated that Iran and Kyrgyzstan could expand ties in various fields. He said there are good areas for cooperation in fields like small and medium industries, mines, agriculture, railways, launching airlines, power plants and dams.

Abdyldaev stressed that his country welcomes cooperation with Iranian companies in these fields.

In turn, Iran’s Zarif welcomed the expansion and deepening of cooperation between the two countries, saying that Tehran is also interested in cooperating with Bishkek on energy, agriculture and transit.

Zarif stressed that the obstacles in this way must be removed.

“We are interested in launching airlines. We believe that launching flights, easing visa regime and removing banking barriers will pave the way for further development of bilateral relations,” Zarif went on to say.