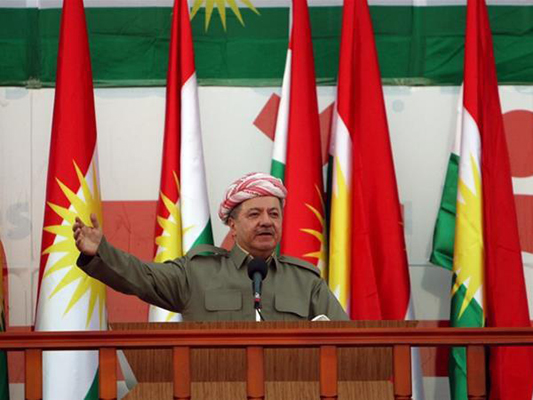 An Iranian analyst says holding a referendum on the secession of the Iraqi Kurdistan region not only would not help the region achieve independence, but also will make it more difficult for Kurds to secede from Iraq.

The following are the highlights of an editorial by Mohammad Saeed Ahmadian, the chief of the Persian-language Khorasan daily, on the consequences of the Iraqi Kurdistan’s independence referendum:

From the Kurdish residents’ point of view, creation of an independent state is a great cause, so holding a referendum on independence means taking a step towards this goal, but let’s examine whether the referendum has made the region closer to independence or has made it more difficult to achieve.

For the following reasons, I believe that Barzani’s policy has not only made the Kurdistan region far from becoming an independent state, but also has caused the region to lose many of its achievements:

2- Another necessity for Kurdistan’s economic independence is to be in control of Kirkuk’s oil wells, which accounts for 35 percent of Iraq’s total oil. The main issue that we will likely see in the coming days is the deployment of the Iraqi government forces to Kirkuk, and if Barzani forces would not withdraw, it would be taken by force. The Kurdish people have not forgotten that how weak the region’s government is. If it was not for Iran’s help and clever and quick decisions of Major General Qassem Soleimani, the region would fall in the very first days of ISIS invasion. Moreover, it should be noted that this region is not composed of integrated ethnicities; therefore, in addition to military weakness, the separatists will be deprived of unified popular support.

3- Perhaps Barzani has been counting on the support of foreign governments, which is also an incorrect analysis. It is crystal clear that the Zionist regime is supporting the Kurds, but the reality is that this regime, without the help of the United States, cannot do any specific help to overcome the aforementioned problems. Moving along the separatism path with reliance on the United States will create three serious problems for Barzani: First, the United States has repeatedly proved it is an unreliable country, and it will quickly forget all its official and unofficial promises. Second, the US failure in Syria showed that even if they want, they may not be able to help Barzani effectively. And the third problem is that the Americans are smart enough not to bet on the wrong horse.

4- Taking any measure undoubtedly requires a legal background to endorse and guarantee its legitimacy. From this perspective, Barzani’s actions are not only problematic in terms of international law, but also contradict the text of the Iraqi Constitution.

5- Some believe that the referendum was not aimed at gaining independence, but was held to boost Barzani’s bargaining power to gain more privileges. I say this is a probable scenario, but the fact is that Barzani has shown if he pursues such a goal, he does not know much about diplomacy as the game that he had started well is drawing to its bad end because all the privileges had to be achieved before the plebiscite was held. Talking of a referendum was like the Sword of Damocles and it could have brought the Iraqi government to the negotiating table and convince the governments of Iran and Turkey to push Iraq to give more privileges. But by holding the referendum the game turned into a ‘zero-sum ‘ one, based on which one side must lose and the other side must win.

Naturally, the central government of Iraq is clever enough to use Barzani’s flaw to end one of the biggest post-ISIS challenges, i.e. Kirkuk case, so as to restore its sovereignty over the area forever. After the Iraqi government established its dominance over 35 percent of the country’s oil wells, naturally it will not be in a hurry, and will wait for the economic effects of the blockade on the Kurdish region’s borders. It is clear that in the following negotiations, the Kurdish region authorities will have to give more concessions. In this way, not only will they not receive new privileges, but they must manage the crisis-hit region by giving more concessions.