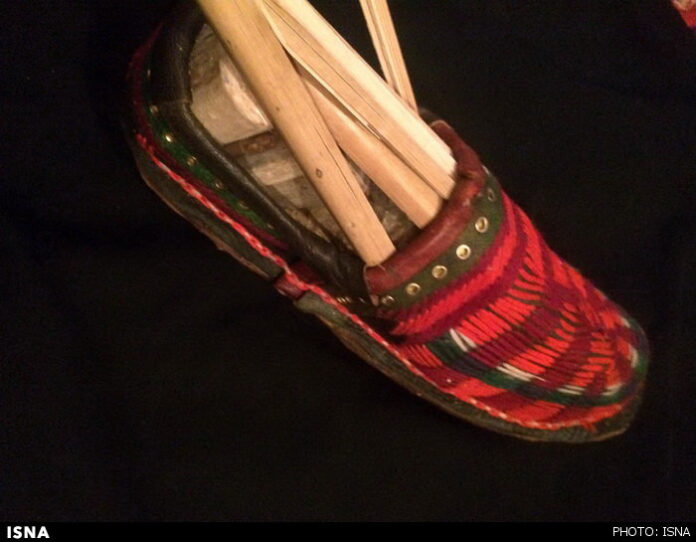 “When the rich people in Baluchestan society wore these traditional shoes, they were called Jing jelang because of the noise they made while walking.”

Jing jelang were traditional shoes worn by those who could afford them in Baluchestan. They are made from natural leather, and in the old times, when people walked with them on, the shoes made a loud noise. For this reason, the local people called them Jing jelang in imitation of the sound they made.

These shoes were made of tanned cow leather, which were first coloured by a special stone only found in Fanuj in the Baluchestan region. Then the pieces were stitched together, and submerged in water for four days to one week, so the material wouldn’t crack. After that, they would be left to dry in the sun for four more days.

This process would have been accomplished with simple, hand-made tools, and the shoes would have been moulded using wood and reeds. Nowadays, nobody wears these type of shoes, but Raz Mohammad Lashkari, the Baluchi artist, has revived this art, and by the order of Elham Mohammadi, a female handicrafts entrepreneur, has made a type of jing jelang.

These were very heavy shoes, and their soles were made of many layers of cut leather. The appearance of the shoes would have been decorative, using silk thread and small mirrored panels.

It would usually take 40 days to make these shoes, but Lashkari prepared a prototype of these shoes in one week for the 26th National Handicrafts Exhibition. These shoes would cost $110-130.

Among other art forms and handicrafts of Sistan and Baluchestan province are needlework, pottery, rug weaving, felt-making, etc.