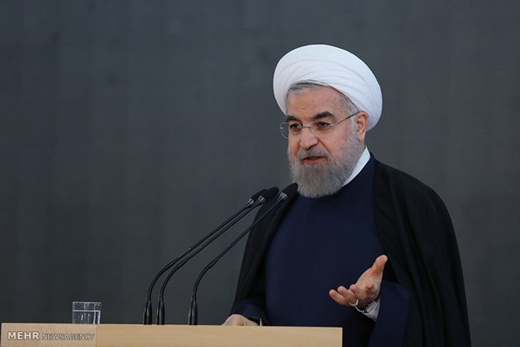 Iran’s Hassan Rouhani has urged that the opportunities provided by the JCPOA be taken advantage of to improve interaction with the world and the implementation of “Resistance Economy.”

President Rouhani addressed the Conference on JCPOA and Resistance Economy, Opportunities and Capacities, held in Tehran on Sunday May 15, to coordinate two important topics in domestic as well as foreign policy. Rouhani’s address was directed to Iran’s foreign envoys and ambassadors to foreign countries.

“The JCPOA is highly important, since it was the outcome of months of hectic negotiations with six world powers; it is rare, and few countries have succeeded in negotiations on such a grand scale with six powers, gaining a modest agreement to avoid other less favourable consequences,” Rouhani told the meeting. “In foreign policy, a black-and-white view of the situation would serve no purpose; refuting baseless claims against the nation was a sophisticated, difficult effort, and the final outcome was a tour de force in terms of legal and political considerations.”

“With that premise, the opportunities created by this feat should be exploited to improve our international interactions. Now, after the JCPOA, an ill-conceived Iranophobia project is on the wane, but there are still issues around terrorism and human rights which should be tackled,” Rouhani emphasized. “Today, all players in international politics would admit that Iran’s nuclear program complies with the international rules and conventions; am economic boom will strengthen the JCPOA, but economic growth requires constructive work with the world in fighting Iranophobia.”

Rouhani believed one outcome of the JCPOA had been a more conducive atmosphere for Iran’s trade with the world, saying “Resistance Economy is both interior and exterior; here, our ambassadors and foreign envoys can play a crucial role in bringing boom and competition to the hard-hit economy,” he recommended.

“A wavering and uncompetitive economy would be soon swept aside by strong world economies; an economy which fails in this would also fail in addressing its domestic issues. Current pressing issues include employment for the young, a concern the cabinet prioritized once it assumed its position. It scored some success in taming the beast of inflation, reducing the devaluation of the national currency. A constructive interaction with the region as well as the world would further accelerate this pace, and we should hasten to obtain cutting-edge technologies by transfer deals with great industrial countries.”

“An amount of success demonstrates the hallmark that we have been on the right track in cooperating with the world; however, this does not mean that the JCPOA parties are committed to their obligations, but that we should create an environment where we require these powers to remain so through due pressure,” Rouhani concluded.