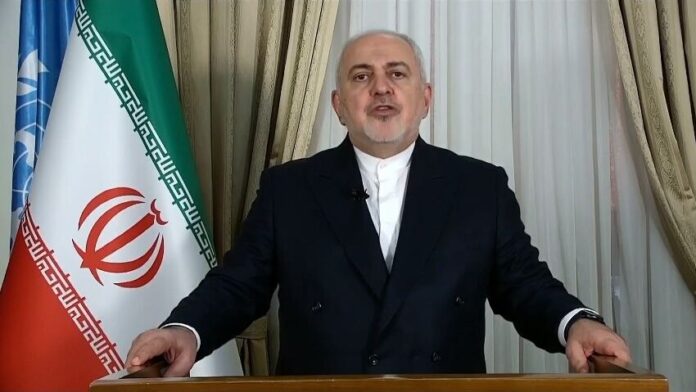 Iran’s Foreign Minister Mohammad Javad Zarif has blasted the United States over its blind support for Israel, the sole possessor of nuclear weapons in the region.

The Iranian foreign minister said the “outlaw regime” that has openly threatened others with nuclear annihilation is crying wolf about proliferation.

He made the remarks in a virtual speech to the UN General Assembly’s High-level Plenary Meeting to Commemorate and Promote the International Day for the Total Elimination of Nuclear Weapons.

What follows is the full text of Foreign Minister Zarif’s Friday speech:
Mr. President,
75 years after the US dropped atomic bombs on innocent civilians in Hiroshima and Nagasaki—the first and only use of such horrific weapons—this meeting provides a unique opportunity to mobilize the world to liberate humanity from the nuclear nightmare.

25 years after the NPT Review and Extension Conference called for reduced reliance on nuclear weapons and the ICJ ordered good faith efforts towards nuclear disarmament, the US is developing new nuclear weapons and recklessly lowering the threshold of their deployment. It has further caused immense damage to the NPT by unlawfully withdrawing from the INF and the JCPOA.

Additionally, the world’s lone perpetrator of a nuclear attack extends blind support to the sole possessor of nuclear arsenal in our region: an outlaw regime that has openly threatened others with nuclear annihilation, all while crying wolf about proliferation.

The international community must compel Israel—which has aggression in its very DNA—to promptly accede to the NPT and destroy its nuclear arsenal. And given its six decades of deception and clandestine development of nuclear weapons, it must be compelled to submit to the most intrusive inspection regime that law-abiding members of the NPT observe.

We also call on the General Assembly to declare as a binding norm of international law that a nuclear war cannot be won—and must never be fought. This should be followed by a long-overdue, concrete program for time-bound nuclear disarmament and provision of security assurances to non-nuclear-weapon states in the interim.
Dear Friends,

Last year, $72.9 billion was spent on nuclear weapons—half of it by the US alone. This is higher than the GDP of most countries. Just imagine if the billions wasted on instruments of global annihilation were allocated to help fund the fight against COVID-19.