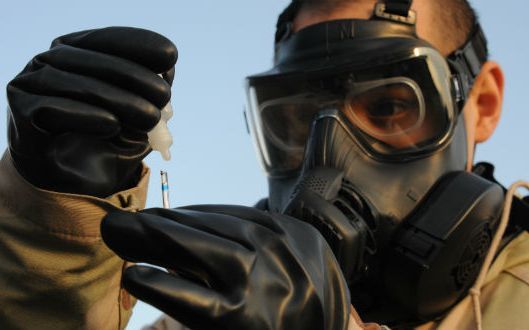 ISIS [also known as Daesh or ISIL] has moved its chemical weapons operations to densely populated residential areas, and is testing homemade chlorine and mustard gas on its prisoners, residents of the Iraqi city of Mosul have claimed.

ISIS is reported to have set up laboratories in built-up neighbourhoods in the heart of its so-called caliphate to avoid being targeted by coalition air strikes, The Telegraph reported, as covered by ISNA.

The terror group is known to harbour chemical and nuclear ambitions, and is trying to manufacture weapons not only for attacks within Iraq and Syria but also the West.

It has a special unit for chemical weapons research made up of Iraqi scientists who worked on weapons programmes under the former dictator Saddam Hussein, as well as foreign experts.

The head of the unit, Suleiman Daoud al-Afari, was captured during a raid by US special forces outside Mosul in March and is now sharing intelligence on ISIS’s chemical operation.

An investigation by Syrian and Iraqi citizen journalists, who report under the name Sound and Picture, reveals that he has now been replaced by Abu Shaima, an Iraqi doctor who worked at the University of Baghdad during Saddam’s reign.

Other than his links to the late Iraqi dictator, little is known about Shaima, which is customary for top ISIS leaders.

He is said last month to have moved the group’s operations away from its main laboratories at the universities of Mosul and Tel Afar, which have both been hit in recent months, to residential areas to protect it against aerial attack.

Residents of al-Mohandseen – which had been a wealthy Christian neighbourhood until ISIS seized the city – said several houses had been taken over by ISIS officials in the last few weeks. A number of large unmarked trucks have been parked outside and more recently they reported seeing dozens of dead dogs and rabbits in nearby rubbish containers.

An ISIS insider confirmed to the journalists, who shared the information with The Telegraph, that they had been dumped there after they were used for chemical testing.

The report also claimed ISIS has been carrying out experiments on prisoners they are holding at a secret jail in al-Andalus, in the Nineveh governorate of Mosul, exposing them to chlorine and mustard gas to test the toxicity.

Residents near the prison have reported breathing difficulties and children developing severe rashes – some of the side effects of exposure to such substances.

The extremists have seized large quantities of industrial chlorine and are believed to have the expertise to make mustard gas. They are also feared to have captured chemical weapon stocks from the Syrian army across the border.

In March, a suspected ISIS chemical attack on the Iraqi town of Taza, south of Kirkuk, killed three children and wounded some 1,500 people, with injuries ranging from burns to rashes and respiratory problems.

Brigadier Roger Noble, the deputy commander of international troops training and supporting the Iraqi army, told The Telegraph that ISIS militants are expected to use chemical weapons against troops trying to retake Mosul, Iraq’s second city.

Hamish de Bretton-Gordon, former commanding officer of the UK Chemical, Biological, Radiological and Nuclear Regiment (CBRN) and chemical weapons adviser to NGOs in Syria and Iraq, told The Telegraph the revelations showed the group was adapting to the coalition’s punishing air strikes.

“ISIS’s chemical weapons operation has been heavily targeted – as is detailed in this report – and moving into residential areas is exactly what you would expect them to do now.”

He said Western security services should be concerned that their chemical operations have effectively gone underground, allowing them to continue their work outside of strike range.

“Now we know the extent of the ISIS chemical and dirty bomb aspirations we must make doubly sure that our security in the UK is absolutely water-tight against this threat.”