IRGC to Unveil New Achievements in Fight against Corona: Spokesman 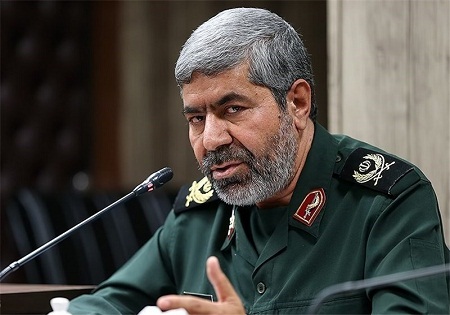 Spokesman of Iran’s Islamic Revolution Guard Corps says the IRGC will unveil its new healthcare achievements in the coming days.

He added the number of inpatient beds and ICU units have been increased at the IRGC hospitals throughout the country, particularly at Baqiyatallah Hospital in Tehran.

Ramezan Sharif went on to say that the production and distribution of disinfectants and hygiene items such as masks and gloves has been underway in different neighbourhoods and Basij continues to run new workshops to produce more of these items.

Sharif also stressed the IRGC’s field and mobile hospitals are ready to serve the patients, saying the ground forces have run five mobile hospitals that have been dispatched to Babol, Gorgan, Kashan and Qom so far.

The IRGC spokesman pointed out that the ground forces hospitals have about 1,700 inpatient beds, two-thirds of which are allocated to corona patients, and so far 471 patients have been admitted to them and 229 have been discharged.

He said Tehran’s Shahid Sadouqi Hospital is the largest field hospital in West Asia, which has 500 inpatient beds and 30 intensive care beds, that are ready to admit COVID-19 patients.

He stressed that Baqiyatallah Hospital in Tehran has admitted about 14,000 patients since the outbreak of the coronavirus, of which 2,560 have been hospitalised as corona patients and more than 2,000 have been discharged.

Elsewhere in his remarks, he announced an N95 mask production line has been launched in recent days by the efforts of Baqiyatallah Hospital specialists noting that the factory has a capacity of producing between 3 and 4 thousand masks every day.