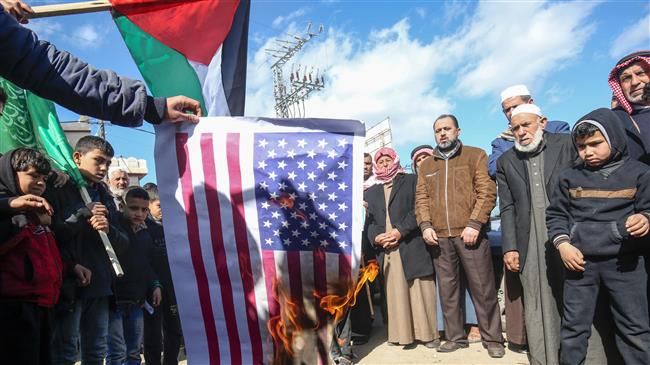 “The (Iraqi Shia) religious authority severely censures the recently-unveiled unjust plan, which is meant to give legitimacy to further occupation of usurped Palestinian lands,” Ayatollah Sistani said in a statement read out by his representative Abdul Mahdi al-Karbalaei during a sermon in the holy city of Karbala on Friday.

“The religious authority reiterates its support for the oppressed Palestinian people in line with their rights to regain their occupied lands, and establish an independent state. It calls on Arabs, Muslims and all freedom-loving people worldwide to back the (Palestinian) cause.”

Meanwhile, Jordan’s King Abdullah II has voiced the country’s full support to the Palestinians in their efforts to establish an independent state with East Jerusalem al-Quds as its capital.

Speaking in a telephone conversation with Palestinian President Mahmoud Abbas on Thursday, the Jordanian monarch said Amman is standing alongside the Palestinian people and their just cause in the face of all challenges on the path to attain self-determination.

For his part, Abbas thanked Jordan’s support for the Palestinian cause and nation, emphasizing that such positions reflect the deep-seated and fraternal relations between Palestinians and Jordanians.

Mass protest in Jordan against ‘deal of century’

Additionally, thousands of Jordanians took part in a demonstration in the capital Amman to protest against Trump’s plan.

The demonstrators converged outside Grand Husseini Mosque after Friday prayers in condemnation of the so-called deal of century, and described the initiative as in favor of the Israeli regime and a bid to kill the Palestinian cause.

They waved national Jordanian and Palestinian flags, and burned the Israeli flag in protest.

The protesters also called for the formation of a popular front to confront the so-called deal of the century.

“This plan is aimed at the annexation of occupied Palestine territories,” Erdogan said during a meeting of provincial heads of his ruling Justice and Development (AK) Party in the capital Ankara on Friday.

He underscored that Jerusalem al-Quds is a “red line” for Turkey, and the Israeli-occupied sacred city is the key to world peace as it has been for thousands of years.

On Tuesday, Trump unveiled his so-called deal of the century, negotiated with Israel but without the Palestinians.

Palestinian leaders, who severed all ties with Washington in late 2017 after Trump controversially recognized Jerusalem al-Quds as the capital of the Israeli regime, immediately rejected the plan, with President Abbas saying it “belongs to the dustbin of history.”

Thousands of Palestinians in the occupied West Bank and besieged Gaza Strip poured out onto the street in immediate condemnation of the plan.

Iran’s President Hassan Rouhani condemned Trump’s so-called ‘peace plan’ for the Israeli-Palestinian conflict as ‘the most despicable plan of the century.’

Iran’s Parliament Speaker Ali Larijani also referred to Trump’s deal as a dangerous plan for the West Asia region which, describing it as a ploy devised to make up for the failures of the United States and the Israeli regime.

“We have to try to make all Muslim countries united against this illegal and inhuman agreement,” Larijani said while speaking in a phone conversation with Syrian Parliament Speaker Hammouda Sabbagh on Wednesday.

“In fact, this deal and treasonous conspiracy is designed to fulfill the wishes of the Israeli regime in the region,” Larijani noted, adding that despite the claims of the US officials, the plan has nothing to do with the interests of the Palestinian people.

The Palestinian president has said “a thousand no’s” to the plan.

“After the nonsense that we heard today, we say a thousand no’s to the deal of the century,” Abbas said at a press conference in the West Bank city of Ramallah, where the Palestinian Authority is headquartered.

He said the Palestinians remain committed to ending the Israeli occupation and establishing a state with its capital in east Jerusalem.

“We will not kneel and we will not surrender,” Abbas said, adding that the Palestinians would resist the plan through “peaceful, popular means”.

Lebanon’s Hezbollah resistance movement has called the plan a “deal of shame,” said it was a very dangerous step which would have negative consequences on the region’s future.

It also said the proposal would not have happened without the “complicity and betrayal” of several Arab states.