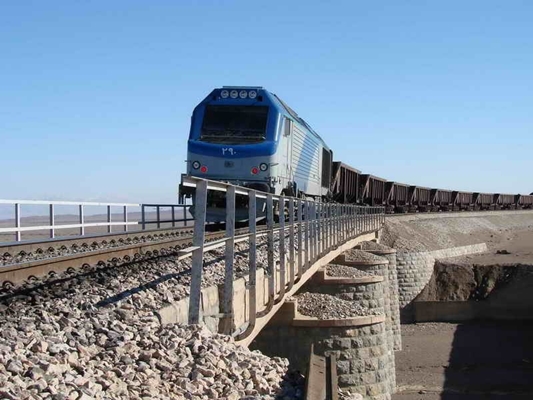 Syria and Iraq have discussed the establishment of rail connections with each other and with the Islamic Republic of Iran.

The issue came up for discussion in a meeting of the Iraqi-Syrian Joint Commission.

Head of Iraq’s National Railway Company Taleb al-Husseini said talks have been held in that regard given the importance of Iraq’s railway network being connected to that of Syria before being linked to Iran’s railroad network.

He said Iraqi authorities are holding talks with Iranian and Syrian sides in order to hold a three-way meeting to discuss the implementation of the project to establish rail links between the three countries and act on what was agreed upon at a bilateral meeting on May 7, 2014.

He said all parties to the talks have stressed the importance of moving towards boosting mutual relations and enhancing the level of expectations for economic, trade, scientific and technical cooperation.

He said the negotiators also worked out ways of forging closer cooperation in the field of economy and overcoming impediments and limitations that hinder the promotion of trade transactions between the two sides.

Iran and Iraq began trying to connect their railway networks years ago.

Accordingly, a railroad connecting Khorramshar and Shalamcheh was inaugurated in 2011. It was supposed to stretch for another 32 kilometres to the city of Basra inside Iraqi soil. However, the project was left unfinished due to reasons such as the attack by ISIS on Iraq in 2014.

The remaining 32-kilometre stretch of railroad was completed during a recent trip to Iraq by Iranian President Hassan Rouhani and the following visit to Iran by Iraqi Prime Minister Adil Abdul-Mahdi. The two sides also agreed on how and when the railway should be inaugurated. Based on the agreement reached, the railroad from Khorramshahr will be connected to Iraq’s national railway network, making it possible to make major trade exchanges and transport passengers from Iran all the way to other parts of the Middle East.

The Syrian transport minister had also said earlier that the establishment of a rail link between Syria, Iran and Iraq was one of the priorities of his country.