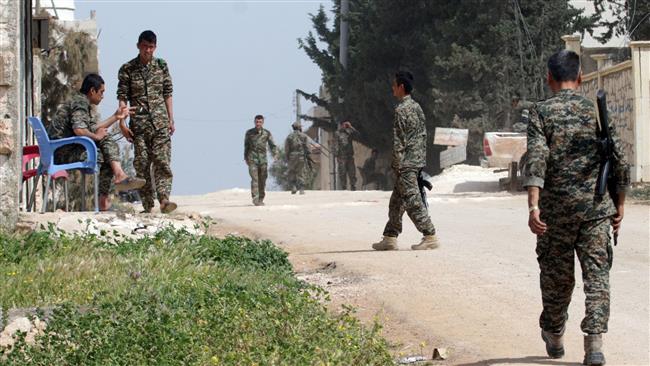 A high-ranking Iranian official has slammed Takfiri terrorists’ occupation of the strategic village of Khan Tuman located just outside the Syrian city of Aleppo, reiterating that the Syrian crisis can be resolved only through political means.

Terrorists and armed groups, erroneously called moderate opposition, have joined hands in capitalizing on the ceasefire in Syria, said Iran’s deputy foreign minister, Hossein Amir-Abdollahian, on Saturday, adding that such moves clearly showed the fact that foreign-backed groups seek to perpetuate military operations and did not believe in a political solution, whatsoever.

Under the control of the Syrian armed forces since December, Khan Tuman fell into the hands of the al-Nusra Front terrorists on Friday.

“We believe that the solution to Syrian crisis is only political and the terrorists and their groups should be denounced and crushed by the international community,” he said.

This comes as 13 military advisers of Iran’s Islamic Revolution Guards Corps were killed and 21 others sustained injuries in Khan Tuman.

Iran maintains military advisers in Syria, where the government of President Bashar al-Assad is fighting an array of foreign-backed militant forces, including, but not limited to, those of the Daesh terrorist group.

Syria has been gripped by foreign-backed militancy since March 2011. The United Nations Special Envoy for Syria Staffan de Mistura estimates that over 400,000 people have been killed in the conflict, which has also displaced over half of the Arab country’s pre-war population of about 23 million within or beyond its borders.