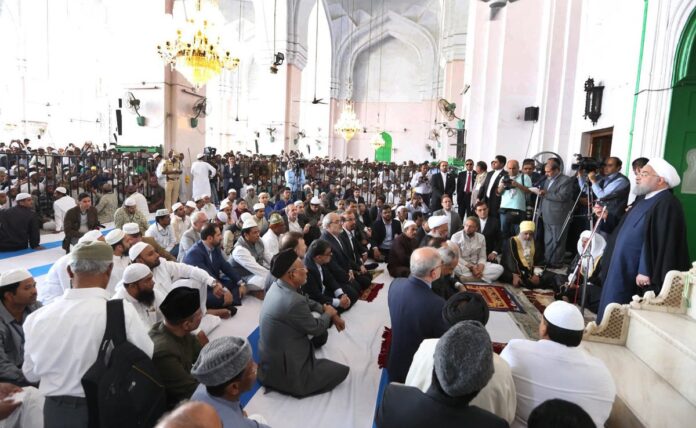 Visiting India, President Hassan Rouhani has called on all Muslims across the world to preserve their unity in the face of the Israeli regime and other enemies.

Rouhani made the remarks after attending the Friday prayers at Makkah Masjid in the city of Hyderabad, the capital of the southern Indian province of Telangana.

Rouhani also censured the US for recognizing Jerusalem al-Quds as the “capital” of Israel, calling on the Muslims to support the Palestinian cause.

He also lashed out at Washington for imposing a ban on travelers from six largely Muslim countries.

Extending the Iranian people’s regards to the Indian nation, the president recalled Prophet Muhammad (PBUH)’s teachings on the need for unity among Muslims and said “all Muslims’ prayers should be along these lines.”

“If part of the Muslim society in the Islamic world today is suffering from a problem, it is because Islam’s teachings and advice are not acted upon and that real Islam is not dominant,” he said.

The Iranian chief executive arrived in India on Thursday on a three-day trip at the invitation of Indian Prime Minister Narendra Modi. He is heading a political and economic delegation, including Foreign Minister Mohammad Javad Zarif and a number of representatives from the Iranian private sector.

Earlier, Rouhani and other Iranian officials held a meeting with a group of elites, religious clerics and leaders of the Muslim community in Hyderabad, where he warned of Western attempts to sow discord among Muslims by creating Takfiri outfits.

On Saturday, the Iranian president is to meet with Modi, Indian President Ram Nath Kovind, and Foreign Minister Sushma Swaraj, besides taking part in a joint economic gathering.

Regional and international developments as well as bilateral trade ties top the agenda of Rouhani’s talks with Indian authorities.