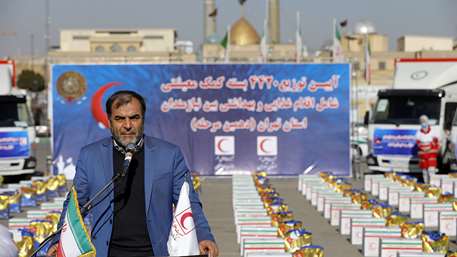 The Iranian Red Crescent Society has received more than 370 billion tomans in public donations of cash and supplies for the coronavirus response and has spent it on a targeted handout scheme to protect the vulnerable groups.

Secretary-General of the IRCS announced that the society has attracted more than 170 billion tomans in public donations of cash and supplies from the Iranian people after the outbreak of the coronavirus pandemic.

Mohammad Hassan Qosian Moqaddam said the IRCS has so far distributed more than 400,000 foodstuff packages as part of a stimulus program in Iran, 80,000 of which have been supplied by foreign aids.

Various foreign countries and societies have donated around 200 billion tomans to the Iranian Red Crescent Society to protect the needy, he added, saying the bulk of medical supplies and health items received from abroad have been distributed by the Medical Science universities across Iran.

During the event attended by senior IRCS officials, more than 4,400 stimulus packages were donated to the needy families with the participation of volunteers and social workers.

Elsewhere in his speech, Qosian Moqaddam highlighted Iran’s success to overcome the third wave of the pandemic and reduce the coronavirus death toll to a two-digit number under the pressure of sanctions while the US and European countries are still grappling with growing fatalities.co